I heard him say it
dozens of times,
but the first time I said it
I laughed out loud.
Dad never had
two extra nickels to rub together—
my parents the king and queen of getting by—
and, get by they did—
money not nearly as important
as a house full of family.
He was a soft touch—
never able to say no to a friend.
I often wonder how he’d fare today
when money is god and we worship
those who have gobs and gobs of it,
like we worshipped the gods
of mayhem on Mt. Olympus.
Perhaps they’d think him a fool—
that small-statured man
who wouldn’t say no—
who’d find a way to help
from a well worn-wallet—
certain to tell you
that he’d be the “same millionaire
with or without it.” 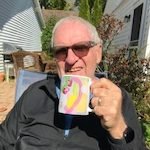