We met the ram yesterday. The one we were warned about but had forgotten was loose in the world.

After the biblical rains, the world felt charged as if pages in time had fallen open. With gaps just wide enough to slip through, we stepped sideways into the crackle to spook around for a bit.

There’s a quality to this land that I’ve noted over time. It’s a thin place where spirits on walkabout wag their tongues, the river carries old hymns, and reality bends.

On days like yesterday, when forgotten doors to hidden worlds break open, it’s foolish to walk as if the rules are still the same. Our ancestors knew something about this, checking invisible sight lines before moving from one place to the next. Nowadays, most of us just blaze ahead, overriding our wisdom bones with our smartphones, and launching out into the world like mad fools.

But, if we’re wise, and, oh, how we ache to be wise, when your bones stop walking on Norwood Road, then it’s wise to wait for why.

I don’t think either of us were surprised when two dogs—light and dark—streaked down the hill toward us in a great warp spasm before becoming stilled at our legs. Delighted, we ran our hands over their heads in greeting, our fingers coming away wet, muddy, and smelling elemental. “Looks like they weathered the storm outside,” my husband, Stryk, said as he wiped his hands over his jeans. I nodded, curious that our pack size had just doubled—from the original two of us to now four. Strange arrivals like this no longer scared us. Down here in Virginian backcountry, we had even come to expect them. “Ya’ll have got that heightened sensitive seeing,” a friend laughed from the shadows as we made dinner the night before. “I’m jealous.”

We laughed with her but seeing comes with strange turf. One moment, you’re here, boiling pasta and enjoying good wine, but in the next, you’re thrust into some story, cast into an unknown part in an unknown time. The only warning was suddenly feeling some larger energy’s eyes on you, aware you existed and equally aware it had been seen in return.

The dogs turned their noses into the wind and trotted toward the river. This particular stretch of Nelson County is a crossroads place with boundaries you can’t see. It can turn as wild as the weather, making the appearance of sudden escorts good insurance for the road ahead. I thought about this as we passed the spirit who haunts the intersection, feeling her kiss climb down my spine one vertebrae at a time.

Ahead, the river thrashed like a net of fat fish, thanks to the remnants of Hurricane Eta who had barreled in on a throaty song and stayed awhile. Two pickup trucks idled in the middle of the bridge, taking in the river, as did we, first peering over one side of the bridge and then the other.

“It’s sho movin’ fast, ain’t it?” said an elder out of his truck, his drawl thick like sourwood honey.

“Yes, sir, she sure is,” I answered, as we all watched a log pole pine spin in a whirlpool.

“Reminds me of Camille,” he said, continuing with a shake of his head, “She ate this bridge when I was a boy . . . had to be rebuilt, you know.” He met our eyes, looking all the way down and through us, before adding, “Some souls are still lost out there somewhere. They ain’t never been found.”

19 August 1969. Back then, Camille, a Category 5 hurricane, picked up her skirts from Mississippi and ambled up and over the Appalachian mountains before orienting herself perpendicularly to the Blue Ridge mountains. Right over Nelson County, she let her grief down so fast that nearly three feet of water found earth overnight. People suffocated in the downpour when they ran out into the darkness.

Driving through the landscape fifty-one years later, you can still see the debris chute scars running over the mountains like strange tattoos. Locals say it was the intense smell of sap, crushed pine, and green timber that saved some lives. One man said that the scent was like “sticking your head in a sack of bark,” a smell he knew intimately from his time in the logging industry. His relationship with wood tipped him off that something wasn’t right on the land that night, long before his eyes took in the roiling rivers of mud coming down the mountains.

I knew about Camille because of the silent markers dotting the roads around here. You have to slow down to see them, if you have eyes for them at all. There’s even one pressed into the bridge. It doesn’t mention the storm but gives 1970 as the date of its construction.

Standing on that rebuilt bridge, the current below us was making me edgy and the dogs were impatient to move on. We shouted farewells to the men over the roar of their engines. If fairytales are right, bridges are betwixt and between places that usually have attendant guardians sniffing out passersby. If these were the expected trolls, then they were kindly ones with deep-time memories.

When the land pulls you into its dreaming, sometimes it’s back into an old story that never got blessed. What starts as an afternoon walk soon becomes a pilgrimage and then a shiva. When walking these dream lines, it’s good to be quiet and to listen with ears on your heart. You choose to surrender to the invisible force that pulls you on, past the stacks of honeybee hives and the house of dogs. Past the field of soaked cows and the grove of arthritic trees holding up black-coated vultures. Even when you want to turn around, don’t. Let yourself go deeper into the story and meet what’s calling you.

Don’t be alarmed when one escort suddenly dashes into the thickets to your left and you discover the other one had peeled off some time ago. You’re meant to face what you came to face without help.

Stryk slowed at my side. “I see the ram. He’s up there with the cows.”

I stopped and peered through the brown bodies to see for myself. “Do you think that’s the one we were warned about?”

Stryk shot me a look. “Have you ever seen one around here before?”

The ram tapped its way through the sea of cows. Its horns running away from his head in sharp points that curled back into the world. He was handsome with a flaxen-colored coat and was muscularly built. Clearly the alpha, he stared us down through horizontal pupils that glared.

“Just walk calmly by,” Stryk whispered, moving forward with human confidence. Yet, all I could think was, “We should have brought the staff.” With clipped steps, I muttered fragile incantations that went something like, “I didn’t survive the bloody weirdness of 2020 and make it to November just so a hangry goat could impale me on a deserted country road washed clean by a hurricane. I am not Job!”

“It’s still inside the fence, so I think we’re going to be okay,” Stryk said. He marched up to the hill’s crest to get another look at the river. “Wow,” he breathed, “it’s really lapping its way into the fields.” We stayed like this, watching the waters, while feeling the ram watching us.

I whistled for the dog, which reemerged at our side, looking guilty. “There you are!” I said, wagging my finger at her. “Way to disappear back there! I thought you were our escort.” She wagged her tail back at me, and I got the sense that maybe she had wanted to come this way, and, in fact, we had been escorting her.

I bent down to ruffle her ears and looked back at the road. Standing up, I nudged Stryk with my elbow.

“Hey, I think the ram jumped the fence.”

“Really?” His eyes turned to mine, unworried.

“Yeah. It’s by the road now,” I said, feeling a lick of fear shoot through me. “Should we walk past it?”

“We’re going to have to, babe. It’s the only way back.” With that, he turned around and started back but not without looking around for a sturdy branch, something that could put some distance between us and this other intelligence.

As we closed in on the ram, its head shot up. Its hooves inched closer to the road, stance strong, eyes watchful. I knew that this was the climax of our walk—the reason we were nudged out and about today. The dog knew it too and slung back behind me with her eyes downcast and her body low to the ground. Submissive.

Suddenly, the cave of my mouth burst open in song in what felt like an old spiritual. It was shaky but loud enough to be heard. “I am coming in a good way. I am coming in a good way.” The words kept pouring out of lips as we passed the silent watcher who watched us pass by. I kept my eyes ahead and back ramrod straight. I sang from my heart in the way I think my ancestors might’ve done when they didn’t know what else to do.

It might have been a moment or a minute, but it was instinctive and carried us through. The temptation is always to look back, but if I wasn’t Job, I certainly wasn’t planning on leaping stories to become Lot’s wife.

“I don’t think it’s following us,” Stryk said, throwing a look over his shoulder.

“No, I don’t think it is,” I said, knowing without looking that it was true.

The spell broke with the sound of an incoming train at our backs. In front of us, the dog sat down on her rear haunches, like a small child, and watched the train rattle past—its cars full of Kentucky coal, molten sulfur, and liquid gas. We caught up with her and watched it roll past alongside her. Colorful pictograms in the form of graffiti tags glided along, like moving Modern art. Now and again, letters would make words that advocated for known things, like LOVE! and Denver. And, these unexpected messages had me wondering about humankind and Mother Nature and the rare slivers where our wildest natures intersect in ways that feel almost right.

In these moments, we remember forgotten languages and receive coded messages, even when they make no sense at all. The real hubris is to think we’ve made a world we can control and that we can bend to our will. We receive grace when we realize we can’t and should stop trying.

With that kind of humility, our eyes are widened. We realize there’s a larger world out there that wants to be seen and heard, just like you. Sometimes, it’s so hungry for the relationship that it yanks you out in inclement weather and down solitary roads where you serenade rams with songs plucked from deep within the sleeves of your heart.

The world is relational, and it’s lonely for us. It holds what you’re looking for in ways you can’t possible fathom, at least not as long as you’re holding that tiny, glowing, screened-in box. Put it down and come on home to the world. You’ve been gone a long, long while. 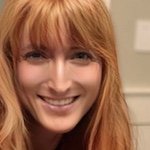 Kelly McGannon is a writer living in the Washington, D.C. metro area. A graduate of Yale University Divinity School and Princeton University, her work has appeared in DreamTime, Outside In Literary and Travel, Streetlight, Braided Way, So To Speak, Teach.Yoga, and the anthology Dreams That Change Our Lives. Kelly’s work honors the land’s forgotten stories and examines the relationship between the sacred and the mundane.