He looked small, curled up on her couch
this handsome boy/man
not looking at her
picking his fingernails
jiggling his foot
a whisper of a beard on his face
he was silent
she waited
he cleared his throat, said he had
the same nightmare every night
dreams of carrying wood
up a mountain, walking with his father
who he trusted more than God
walking with his father who he loved
more than God

Dreams of an altar
a fire, a sacrifice
did it really happen?
were his hands really bound?
a knife at his throat?
it maybe a lesson for others
he said, finally spitting out bitter words
like the fruit of the first lemons
or bullets from an AK-47
but it was me, here his tears fall
his hands claw the fabric of the couch
his face twisted with memories
I was eight he says, sobbing
I thought we were sacrificing a lamb

The room stunned silent
by the pulsing betrayal
she refuses to invade with clichés
of time healing, of suffering
being transformational
she is familiar with Genesis
but only a part time believer
thought it all a myth, a fable
an allegory to show the power of faith
she folds her face in her hands
and remembers her son saying
the sad is so big, mommy
runnels of tears down his face
she wants to hold him in her arms
and say it will be OK
but who is she to make such a promise 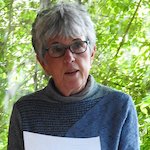 Claire Scott is an award winning poet who has received multiple Pushcart Prize nominations. Her work has appeared in the Atlanta Review, Bellevue Literary Review, New Ohio Review, Enizagam, and The Healing Muse, among others. Claire is the author of Waiting to be Called and Until I Couldn’t. She is the co-author of Unfolding in Light: A Sisters’ Journey in Photography and Poetry.