When Stevie Nicks was a witch in Florida, I sent her letters on stationery purchased from the canteen.

The new girl at the youth residential center told me her mother was Stevie Nicks, and also a witch. I was fourteen, a year into the system. I didn’t ask why Stevie Nicks’s daughter was also there. Anything was possible; lies about mothers, or the real reasons kids were there: I’d been stealing cars since I was eleven, or my teachers kept calling the social workers, or, my mom’s in jail for selling drugs.

I heard the stories in group therapy. The new girl rarely spoke in group, but that was okay because she was new. The staff would weasel her secrets out sooner or later. Sometimes kids cried. Other times, maybe they should have. “Do you want to see pictures of my mom’s funeral? My dad stabbed her to death.” That girl did not cry. She was tall and blond, but not pretty enough for it to work in her favor. I talked about my mother in group, also about her boyfriend that she was going to move away from any day now. Child Protective Services said I couldn’t go home until she did. She was going to get her own place in Kentucky near my grandparents. I talked about moving to Kentucky a lot, all those years in the system.

The county-funded canteen sold hygiene items, dollar store trinkets, stamps, and stationery. I hoarded bottles of Alberto VO5 shampoo and conditioner until there was no room left in the back of my sturdy, wooden wardrobe to hide them. I couldn’t use that much, I just wanted to buy something once a week.

“Your hygiene privileges are suspended for a month.” A staff member stood in front of my wardrobe with the door open, pointing at more than a dozen sets of bottles. I glanced at my desk, relieved that she’d only said hygiene. The nicest stationery at the canteen was a notepad and matching envelopes in sherbet colors. Before the new girl, I’d gone through two sets in a year, sending letters home. After the new girl, I had seven sets secreted away in the back of my desk drawer.

I don’t know why my mother saved the letters I sent her, then gave them to me in a large box, decades later. (We were friends-ish, by then.) I read them recently at the beginning of quarantine while going through old papers, years of letters on colorful stationery written in my rounded, teenaged scrawl. I wept.

Dear Mama, they all began, can I please come home? In some, I pestered, repeating and rephrasing the question; if I asked it differently, would I get a different answer? In others, I offered my merits like the good side of a pros and cons list. I reminded her of my social worker’s offer to help her leave her boyfriend, get herself on her feet with a temporary motel, then subsidized housing. In some letters, I begged. Once, I threatened. In another, I persuaded, using the fifty-cent language of a precocious ninth-grader who wants to be a writer when she grows up. My argument wasn’t half bad, however, she never went to the motel. (Years later, I learned it was because she thought the maids would steal her things.) Moving to Kentucky was always there, like a ghost, or a scar.

The new girl said Stevie Nicks could teach me how to be a witch. I don’t remember caring about black magic. Instead, it was the desperate promise of receiving attention from a mother, but not being a daughter. In the system, many daughters suffered at the hands of their mothers before they were taken away. My own chose an abusive boyfriend over working with my social worker to bring me home. I imagined Stevie Nicks as a mother figure who would love me enough to allow me into her coven by mail.

The new girl gave me a Florida address. That week, I used one of my stamps to send a polite introduction to Stevie Nicks. This was the first letter I’d sent that didn’t begin with the words can I please come home? I used up many sets of sherbet stationery on Stevie Nicks. Often, I listed my merits. I was good in English class. My hair was long like hers. I assured her I was much better than the type of girl whose mother would not move into a motel.

The new girl and I listened to my heavy metal tapes in the day room. She parrotted the lyrics, explaining the witchy meanings behind each phrase when we could make out the words. The words to Metallica and Iron Maiden were easier to understand than King Diamond, the theatrical, Danish speed metal act we adored for the shock value of the devilish photos in the fold-out cassette sleeve. “He’s a storyteller, this is all made up,” I told a staff member who commented on the falsetto, wailing lyrics. I was good in English and I hoped my well-known desire to be a writer would give me enough authority to spin a heavy metal band into something that wouldn’t be confiscated. We listened to my tapes because the new girl didn’t have any Stevie Nicks tapes, however, kids arrived at the center with odd assortments of belongings. Maybe her social worker would send them to her. My mother didn’t visit, so I didn’t expect that Stevie Nicks would, either.

The new girl left the center when she was no longer new. I stayed. I had nowhere else to go. That Christmas, dinner was the same as Thanksgiving. I was a new vegetarian, and they placed me on an eating disorder protocol when I began refusing meat. The staff locked my bathroom door two hours before and after every meal. I was never bulimic, just a vegetarian, and I’m still uncertain what I might have done in the bathroom two hours before a meatless meal. I ate with a watchful staff member in an empty day room while the other kids were in the cafeteria. My meals arrived on a cart in white, styrofoam to-go containers. One compartment was always filled with peanut butter. The other two contained a random assortment of steamed vegetables whose heat turned the peanut butter to liquid. Not surprisingly, I didn’t develop an affinity for hot peanut butter and veggies.

I used my weekly stamp allowance on letters to an address in Florida, and letters to my mother. It never occurred to me that correspondence involved receiving letters, not just sending them. My mother never responded.

Neither did Stevie Nicks, but strangely, her letters never came back marked Return to Sender. I stopped writing letters before I aged out of the system. I’d learned what correspondence meant by then.

What was it like for a stranger in Florida to open my weekly sherbet-colored envelopes addressed to Stevie Nicks? Florida is easier to speculate on than my mother. How do you tuck the words Dear Mama, can I please come home? back into their envelopes and place them into a box, unanswered?

As an adult I grew into a perfect daughter, someone I believed she would want to love. I bought her expensive gifts and her first cell phone. “Tiff, I just don’t know when I’m going to use this,” she said as she opened the box. I did good deeds. I listened to her medical woes. I revered her on Mother’s Day and her birthday.

A few years ago, she dug up the past. “It wasn’t my fault,” she said. “Was it my fault?” I asked. With less than a mea culpa in response, my world shattered. The sky broke into shards with serrated teeth and fell around me. I couldn’t pick up the pieces. It took months until I was whole again. I haven’t spoken to her since.

Distance has afforded me clarity; my gifts and good deeds were nothing more than buying tickets to Kentucky. Many times back then, I wrote Dear Mama, can I please come home? As an adult, I twisted her new praise and acceptance into a glorious yes to the question in my letters, an answer she never gave. Today, I’m whole from the shattering and far stronger in a home of my own making.

I can’t help but wonder if Stevie Nicks ever had a daughter or lived in Florida. At fourteen, it was easy to believe both were true, and a great comfort to know I could have been chosen for witchy apprenticeship if only she’d written back. 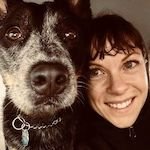 T. J. Butler lives on a sailboat with her husband and dog. She writes fiction and essays that are not all fun and games. She is a Pushcart Prize nominee and an occasional contributor to Tiny House Magazine. Her work appears or is forthcoming in Pembroke, Levee, Flash Fiction Online, Tahoma Literary Review, New South, and others. Her collection of short stories, A Flame on the Ocean, is forthcoming from Adelaide Books. Find more of Butler’s work on www.TJButlerAuthor.com and follow her, @aGalWithNoName.