The Moroccan village was the same color as the surrounding hills and empty desert. The landscape had three primary colors: sandy tan, sky blue, and, occasionally, palm tree green. The young couple, tourists traveling into the hinterlands, found menu choices equally limited where options, like all resources, were scarce.

The couple carried their argument from the restaurant into the night. The man, angry, pulled the woman close, roughly gripping her sweater. “Take care what you say.”

From the shadows down the dusty narrow side street emerged a small group of young men, boys really. The man’s anger, his hurt, mixed with shame, now felt truly dangerous. He turned to face them. They murmured then pushed one hesitant teen towards him into the light of a streetlamp. The man recognized him immediately.

The disagreement during dinner began with a confession. The man said he felt guilty for what he had done. He feared he had taught a terrible lesson—that retribution could be bought.

Earlier that morning the teenager had confronted them in the park-like space spanning a culvert by their hotel. The boy was angry they had hired someone else for a camel ride into the desert. He accused them of reneging a promise made a few days prior to go with him. The man said he’d said “maybe,” which wasn’t a promise. The boy spit as he talked and cursed the man.

“I say fuck your mother!”

“You speak of my mother?”

The boy smirked, danced backward far out of reach and yelled loudly, “Fuck your mother!”

The man wasn’t angered so much about the insult as he was that the boy taunted him openly because there was nothing he could do about it.

The man whipped out a couple of bills and held them aloft between two extended fingers. He spoke loud enough for all onlookers to hear, “This money goes to whoever kicks his ass!”

He pointed those fingers at the boy, who appeared stricken. “His ass!”

Several teens eagerly stepped up. The boy took off in a cloud of dust, dodging between the palms until they chased him down. Holding him roughly, they looked across the culvert to the man for direction. He motioned a swift kick with the side of his foot as if striking a soccer ball. They obeyed, kicking the boy once, twice hard in the ass.

The man called out, “Enough!” They released the boy, who ran off into the grove of palms.

During the dinner not long after his confession, to sharpen an unrelated point the woman tossed the incident back at the man. He felt betrayed. His guilt, his vulnerability so freshly revealed, was being used against him. Would always be used against him.

“That isn’t me,” he might have said. But it was him. Or rather, it was me. That’s what I’d like to believe, at least.

Back on the darkened street, he and the boy were facing off once again. Encouraged by his friends the boy stepped closer.

“I am sorry for what I said.” The boy extended his hand.

The man did not expect this, nor did he feel it was deserved. Yet he responded without hesitation, closing the sandy gap between them to take the boy’s hand in his. He said, his voice thick, that he too was sorry. 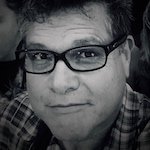