Like Portland or is it Austin
I am also trying to keep weird.
Nobody says keep Oakland
weird. It’s got a gentrifying
mix with floaters on top
and busted bits settling
on the bottom and curious
pieces swirling suspended.
According to Ferlinghetti
simile and metaphor make poetry.
Ferlinghetti whom I once saw
at Brandy Ho’s getting lunch
as was I at the counter after
having just bought Carlos Fuente’s
Terra Nostra as I needed a novel
the size, shape and weight
of a brick to give my MFA
bildungsroman some DNA
like Moby Dick, or rather unlike
Moby Dick which I had dragged
to Europe and read in two weeks
even though I was reading three
other books. My moment may
have come at my residency
while asleep when my roommate
was up late conjuring at the laptop
hearth words that would be turned
into an Oscar winning film. So
I imagined myself in that fine
fellowship and Ferlinghetti
and I eating at the same table. 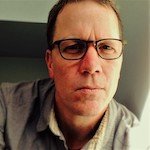 Robert Detman has published fiction, poetry, and essays in over fifty publications, including Antioch Review, Causeway Lit, New Orleans Review, The Smart Set, The Southampton Review, Tusculum Review, and elsewhere. His stories have been finalists for the New Letters Literary Awards and nominated for the Best of the Net, and a story collection was a semifinalist for the Hudson Prize from Black Lawrence Press.