As the boat eased out on
the pond, there was just enough
light to see pale ribbons of sky
rippling in the water. Dad
paddled ahead with slow, heavy
strokes, but the lives watching
from trees, listening in the grass
knew what had just arrived.
As he rested the paddle on his
knees, the boat glided on as if
it knew where it was going,
pulling a wide scarf of quiet
behind it. Then the first deep
croak sounded in duckweed
near the far bank. When he dipped
the paddle over the side to move
closer, a cottonmouth hit it hard,
twisting up his leg to the knee,
white mouth sprung wide open
like a trap. The next part I’ve
heard so many times, I like to
imagine he took me along
just this once, both of us
shaking as he slowly aimed
the 22 pistol and shot the snake.
But standing out here now, I
hear him starting his story all
over, telling how he pushed
off from the pier, how lucky
he was not to get bitten miles
from town, how alone he was
on the dark pond, a man who
never had room for anyone
else in one of his stories. 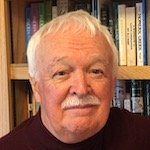