Hedged by four sheets strung on wire, my grandparents
spent their wedding night, December 1917:
a New York married-barracks, moans muffled
the night before the men shipped out.
Three faces to a porthole on a transport ship.
“Fish in a barrel” riflemen would say, sometimes with pity.
Who would notice a patient in an Army hospital
with a different kind of cough?

As a girl, my wife heard it from her grandfather.
Elmer could bear to tell it only once. He’d turned 18.
After morning chores he volunteered to bury rural dead.
A horse. A spade. One afternoon he rode up
to a silent farmhouse. The chicken gate was down.
The dogs had disappeared. He buried a family of six,
each at peace in their own proper bed.

We socialize at a distance as he settles
on his grandmother, now passed.
She’d not forget at nine a wagon
daily coming past to load the dead.
Or the sight of her same-aged friend wrapped
in a sheet, a smaller bundle lifted on.
I imagine a stigma in her eye: something
she learned to see around, but never gone.
106, she died. Her breath disappeared as a bird
which glides silently beyond the trees.
She never did arrive at 2020,
with her chest a heavy haul for air,
her voice a reed too thin to call her friend
when the wagon comes around again. 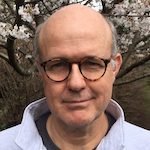 Eric Forsbergh’s poetry has appeared in Streetlight, JAMA, Artemis, The Northern Virginia Review, The Cafe Review, and multiple other journals. A retired health care worker, he has most recently volunteered for Loudoun County Public Health Department as a COVID vaccinator. He is a Vietnam veteran.