Turning sixty last month mandated a driver’s license renewal that replaced my wide-eyed forty-year-old self with a puffy-eyed, wrinkly-necked person unmistakably related to the round-faced woman who gave me life.

I stare at my new picture and wince, wondering if the blood flow to my brain will one day be limited. But I also look with pride, remembering the vibrant, funny, empathetic person my mother once was, hopeful I inherited some of her better traits, too.

That ninety-year-old now lives with me and asks repeatedly, sometimes three or more times in a five-minute span, “What’s it like outside?” or “What’re we having?” sometimes just after we just done et, one of the many mountain expressions she relied upon for comic relief, raising us to find humor in the mundane. She spent about two years in a locked-down memory unit before the pandemic, but when the facility went on lockdown and Facetime calls revealed a greasy-haired woman in dirty clothes without dentures, we hauled her home, to the house where my husband and I live now, where she raised me and my four siblings.

Today I flick on the television, an attempt to keep my mother awake. Throwbacks to decades gone by are usually better received, so I queue up Merv Griffin, whom she once met and tucked his signed glamor shot in a dresser drawer. On this episode, Griffin interviews a fifteen-year-old Brooke Shields, which segues to a more recent interview with Larry King. In the latter, a middle-aged Shields describes her mother’s dementia as the worst thing she’d ever experienced, detailing the indignities of a clenched-up body, biting, moaning, and looking up with no recognition of the famous face once dubbed the most beautiful in America. Shields’s response to King’s question about not being able to get love back: “It makes you ache in this place that you can’t find; it’s so deep, like right where your heart is held.”

Surely all children of parents with dementia grieve in the deepest part of their being, and that process involves all the stages people talk about. My mother’s decline has been gentle, without cruel personality shifts, but in the beginning, I was angry. After a divorce and children grown and flown stripped her of the roles she valued most, my mother seemed to lose her sense of self. I was livid she wouldn’t take a pill, talk to somebody, do something to get better. This oldest daughter/fixer/meddler encouraged her to seek help, but she’d divert and avoid, and I felt bloodied, as if beating my head against a brick wall.

Sometime along the way, as my once bubbly mum withdrew more and more, the depression morphed into forgetfulness, a good-bye spanning almost two decades so far, where memories fade like color in old Polaroids. Depression and dementia are kissing cousins, and somehow along the way, my anger morphed into acceptance: there was no going back.

Every part of me believes that while my mother can’t find the words or show how she feels, she is still there. I’m incredibly grateful for family and friends who look her in the eye and initiate one-sided, awkward conversations. I try not to hold grudges to those who don’t understand and avoid or forget the power of a warm greeting or human touch.

My mother was devoted to family, selfless in caring for others. Even in the decades of depression when she still had mental clarity, she came to life in pivotal life moments—marriage, sickness, death, adoption, and birth. It was like flicking on a light switch, and she was oh-so-present, overflowing with vitality and love.

That very thing happened in the throes of the pandemic, when my mother woke up saying her arm ached. As a potential bellwether of heart attack and a somewhat alarming declaration coming from someone who almost never complains, we spent most of that Sunday in an emergency room. While the waiting was for naught—she was fine—I believe some lingering pain coupled with the hospital hubbub were like jumper cables revving a drained battery. During the long wait, my mother suggested that the blouse I was wearing, a brown/orange flowy paisley number that didn’t jive with her red/blue tailored Talbots tradition, be tossed in the trash. I met the criticism with glee that she was not only noticing but commenting, and took note how we are so often irritated with parental comments and take them for granted—until they stop coming.

Mom continued to engage more as the day progressed, and after returning home chatted with an old friend by phone with a responsiveness I had not witnessed in years. Around midnight when I found her wide awake in bed, she shared the details of a nonsensical dream, asked a gazillion questions and shot quizzical, comical looks trying to make sense of my responses in a still-jumbled brain. We laughed, she wheezing until she could barely breathe, me crying, feeling the kind of joy that rushes in when someone plops a new baby in your arms. It was like a scene from “Awakenings” without Robin Williams in the mix, an unforgettable twenty-four hours until the light again went dim.

In this journey there is incontinence, and spitting out food as textures and chewing become difficult, but always good news too. I know how to bring out the best in her thinning gray curls, and she can still apply her signature Revlon Love that Red without a mirror, so most days she looks her best self. Music is magic, and sometimes we dance, and I catch flashes of her pointed-toe jitterbug jig.

We hold fast to fleeting moments of clarity, even as her steps get smaller and slower, her mouth droopier, her expressions more frozen. I know we are lucky that she remains peaceful and that the simplest of gestures—help sliding a foot in a sheepskin slipper, giving an eye drop to keep glaucoma at bay, passing a Kleenex to wipe a runny nose—almost always elicit a thank you and most days a smile.

When I tuck Mom into bed at night, she almost always closes with “let’s have pancakes for breakfast.” In this fast-paced world of change and challenges at every turn, I really don’t mind the repetition, and most days I welcome the slower pace. Many view freedom as the ticket, but it’s the tethering and caring, and sometimes knowing the script, that help me stay sane. 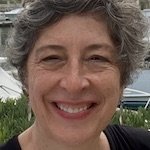 Kathleen Thomas recently left an eighteen-year gig at Richmond’s St. Christopher’s School, where she taught journalism and edited a biannual magazine. She’s a UVA graduate, former newspaper journalist and mother of three grown sons who looks forward to a new chapter with her soon-to-be retired husband. She enjoys walks in the woods with her two rescued besties, family meals, sitting fireside, and writing from her heart.