We first met holding hands at the outdoor Saturday market, vendors selling tie-dyed tee shirts and us eating foods that seemed exotic to me, like yakisoba noodles and teriyaki chicken. You revealed an existence better suited for me—one that lay beyond the endless berry fields and tractors and crippling solitude of my rural childhood. Although our time together was limited, you were the first city I ever knew, dear Portland. And my love for you was instant and deep and true.

Remember how, when I was in high school, I tried to visit you as often as possible? Driving for hours to pour over books about famous choreographers in Powell’s Bookstore; exchanging witty banter with friends in your coffeehouses (funky hole-in-the-walls oozing character, not these carbon-copy corporate deals); visiting your movie theatres because it was the only place to see an art house film within sixty miles. And of course, sneaking out to your all-ages gay dance clubs with my friend whose true self was kept closeted at our country school. To get there, we scampered through your deserted warehouse blocks in the middle of the night, careful not to trip over defunct railroad ties embedded in the pavement and scurried up abandoned loading docks to enter through a blacked-out door. I learned my way in and out of your crevices, through the side streets and nondescript storefronts. Our time was magic.

We moved in with each other as soon as I finished college. You were all existential angst and tater tots and bowling alleys choked with cigarette smoke on a Saturday night and an ever-present low-slung greyness pissing rain everywhere.

But then, I had never known any others, never been with anyone else. You said you understood. That if our fate was to live happily ever after anyway, what would it hurt if I experimented a little first? Like an extended bachelorette party before we said our forever vows.

Of course, I never would have put our relationship on pause for any old city. Definitely not for a Chicago or an L.A. Only the queen of all cities would do, New York City. You must have known that I always had a thing for NYC. Photos of her taped to my bedroom wall, stockpiling every image I could find of her. You probably weren’t threatened by it because who would have thought someone as ignorant and inexperienced as me could ever end up with a city like her? On second thought, there’s a whole genre of movies based around that plot line. Country bumpkin goes to the Big Apple, gets knocked around on the way to stardom.

In spite of a lifetime spent daydreaming about her, it was hard to get in with NYC. She certainly didn’t care about my past, where I’d come from—or where anyone had come from. Oregon or Oklahoma or Ohio—it was all the same to her: Not-New-York. Every inch of her radiated significance, buzzed with vibrancy, from her spiked towers to her clogged sidewalks to her crumbling brownstones. Her storied past metamorphosized into an emergent future right before my eyes. The fact she carved out any space for me at all marked me as special, elite.

Being with her on a good day felt like electricity running through my veins—like when I stumbled upon roller-disco in Central Park, or when I happened to be at Steps on Broadway the same day Mikhail Baryshnikov came to class, or when I navigated through Penn Station at rush hour, carried along on a throbbing sea of humanity, a single drop within the collective, achieving a rare moment of connection with the universal life force energy. Truly like nowhere else mattered, even you, dear Portland.

But that was thing about NYC, she was a fuse burning too white hot, like a defibrillator strapped to an already beating heart. So much amplitude she shorted me out. Because in addition to her phenomenal qualities, there were also her faults. Her incessant shouting and sirens and cockroaches and filth and rotting stench and endless concrete and crowds of people crawling everywhere. Never a still moment to catch a full breath.

After two years, the brief, intense love affair flickered out. Driving over the George Washington Bridge, I turned back for one last glimpse, tears flowing like geysers, a decimated crater pulsating in the middle of my chest. NYC didn’t even know I had left.

Still, I wasn’t sure I was ready yet to settle down with someone as pedestrian as you, a mere afterthought on the map between Seattle and the Bay Area. With cold feet, I cajoled, “We still have our whole lives to say I do.” You weren’t going anywhere, right?

And, that’s when I met her, San Francisco, the beauty queen. She was all hills and curves, bay waves lapping at the Marin headlands, encircled by a golden halo, swaddled in clouds of fog. And when she opened her arms to me, I became beautiful by association.

Mentioning SF elicited the same response from people worldwide. Their faces melted into a smile, their eyes softened into a dream. “I love San Francisco,” was always the refrain. With the occasional qualification, “But isn’t she expensive?”

SF brimmed with a joy for life—practicing yoga on beaches, relishing pot stickers as big as a fist, reveling in three (!) World-Series-winning ticker tape parades in less than a decade. It’s hard to say what was more intoxicating: SF, or the person I became when I was with her.

After she and I were together five years, then ten, I wondered about coming back to you, dear Portland. When I asked SF about getting serious, about making a grown-up kind of commitment, well, that’s when our relationship unraveled. SF was masterful at developing picture-perfect memories, but she wasn’t in the business of creating a future.

The end was amicable and, truth be told, it barely registered for me. Because, like a biological clock ticking deep in my gut, the moment had arrived for my prodigal homecoming. After more than a decade, I returned to you dripping in anticipation for our cataclysmic merging. Ready to let my existence intertwine with yours for all eternity.

But in my absence, you’d changed, hadn’t you? Not just that you had so many more suitors, but that you’d lost your jagged edge that came from not giving a shit. You’d become polished, too smooth, catering to these new people and their desires. Laughing with them while they waited in lines circling the block for something called Salt & Straw ($5 for a scoop of ice cream?!). Allowing them to descend in swarms on all your best places, like Powell’s, where whole showrooms were now devoted to Sasquatch tchotchkes. People touting you as a “foodie town” (whatever the hell that meant). Inviting them to gentrify your neighborhoods with bars where kids wear trucker hats ironically and pay money to throw axes, making a mockery of your logging roots. Idly standing by as your housing market skyrocketed, pushing out all those who made you a viable city. I hardly even recognized you. You’d become a glossy magazine ad, a sitcom, a catchphrase.

I fucking hated you then. For selling out. For commodifying what made you special. It made me question if we were really going to make this thing between us work.

Yet something strange has started happening. Many of your suitors have begun disparaging you recently, growing disgusted, washing their hands of you. Because of the near total collapse of your downtown after the pandemic. Because of the ceaseless vandalism. The escalation of gun violence to unprecedented levels. The ubiquitous tents and trash and apocalyptic camps of houseless people that we can’t provide solutions for. There are those bemoaning that you are not the city they signed up for. They envisioned you the girl next door, with your lush forests and rain-washed air and snowcapped mountains reaching towards heaven. They came to you seeking an urban utopia. They didn’t appreciate your rough past and turbulent dichotomies.

But I see you now, dear Portland, for everything you are.

You are trying to find your place between relevance and obscurity. You are my Portland and theirs and the Portland of those who will follow after and the Portland of those who came before any of us, each newcomer usurping the rights to you, creating a churning stew of privilege and poverty. Figuring out how to reconcile the exclusionist policies of your past (their ghosts still lingering) with your entitled 21st century liberalism. Wanting to protect your growth boundaries from sprawl, meanwhile losing the opportunity to house all those who wish to live within your borders. A city founded on pillaging the very resources it now seeks to protect. Your contradictions and desires and failures comprise the very essence of you. You are caught up in the ceaseless evolution of existence, a never-ending work in progress.

And it was always going to be you and me, baby. 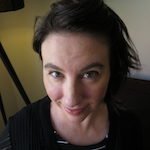 Melissent Zumwalt is an artist, advocate and administrator who lives in Portland, Oregon. Her written work has appeared in the Longridge Review, Arkana, Atticus Review, Full Grown People, Pithead Chapel and elsewhere. Read more at: melissentzumwalt.com.