For rows of sun-buttered, glistening corn, red and green trimmed vines of
tomatoes
wrapping themselves around silvery rusted poles, thick fields of gummy
blooming tobacco,
tangled thrusts of okra and lean stalks of string beans, plump pumpkins
and cantaloupe, they came.
Some think they rode over, camouflaged in the beautiful, murderous
kudzu.
Others that we brought them here purposely, despite or unaware of their
hunger, like gems.
Papa called them pests, bastards, Japanese—beetles no different from
morning glories or Johnson
grass, or me puffing the fluffy seeds of dandelions.
Instead of apple orchards and irrigated fields, they discovered the waft of
pheromones
from decapitated plastic, half-gallon jugs. I thought of the violent thistle’s
violet sting,
a bright hum seeping over everything, and tried to brush their jade-green
metal bodies back,
away from the jagged edges where they clung, pin-legged and resolute.
It was as if the whole world floated below them, in a clear poison,
face-down, shining.

On the swings, I remember feeling like a great mallard
soaring away, as chill September

dampness pressed my face.
I didn’t know to look down

at my mother waving from the turnstile,
disappearing, or my father

neck. The cockled sun drowned
to a blank, and flat in the car’s back seat 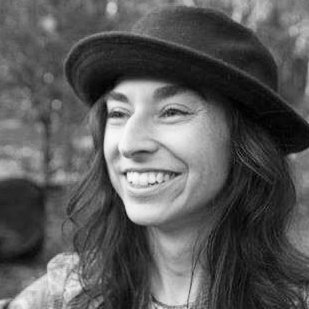 Angie Hogan’s poems have been published widely in journals including The Antioch Review, Ploughshares, Quarterly West, The Threepenny Review, and the Virginia Quarterly Review, among others. She has also had work featured online at Poetry Daily and From the Fishouse. Originally from a small town in East Tennessee, she currently resides near Crozet and works at the University of Virginia Press.