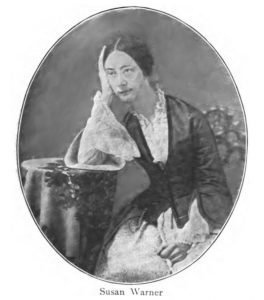 [/frame]The first American best seller was Susan Warner’s Wide Wide World, a saga of tears and redemption that appeared in 1850. It was eventually outsold by Uncle Tom’s Cabin, but only just. It’s not surprising that this best seller – and many a follower – was written by a woman. While women had no foothold in the professions – law, medicine, college teaching, scientific research, indeed, higher education itself, were virtually closed to all but that remarkable few who had supportive and indulgent parents (which is to say, fathers) or other male protectors.

By the middle of the nineteenth century, however, women, even some of the most ordinary of middle class, haphazardly educated women, were heavily into the profession of writing diverting, improving and sentimentalizing literature for other women – and men. They were making money doing it too, sometimes a great deal of money. Ordinary women and not just those in the upper classes, had free time to read. They didn’t have civil equality, but they were better off than they had been. And it was only natural that women writers had the life experience to write what mattered to them.

“A damned mob of scribbling women,” Nathaniel Hawthorne is said to have called these best selling writers and who can blame him? He was no doubt expressing what many a serious writer has felt about popular fiction, which seems always to have an edge over work that requires more sophistication. It has no interest in bettering the world of literature. It exists for its own sake. That’s not to say that masterpieces don’t sometimes become best sellers and the authors of them attain reputations that last through their own generation and into the next and the next. Charles Dickens, for example. Mark Twain.

In the mid 1980’s, when I was a graduate student, like many a feminist grad student of my time, I took on the project of trying to find one (or more!) of those thriving mid-nineteenth century women writers whose reputation might be rejuvenated, who might have something to say to this age. 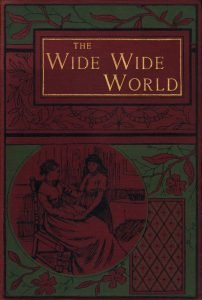 [/frame]It was a really interesting project. Just finding the names of the books was a challenge, in those days before the internet. Even more challenging was finding the actual books themselves. I had many an interlibrary loan. I went to many a second hand bookstore. I even went to second hand furniture stores – that often would have boxes of books they had bought along with everything else, at estate sales. Well, there were undiscovered marvels among the scribbling women of the nineteenth century –for example, Rebecca Harding Davis, although I was not the first to discover her. (Scribbling Women has some of her work and some other wonderful examples of nineteenth-century women writers who don’t get enough attention). However, I’m sorry to say, Wide Wide World is not one of those masterpieces. It’a fascinating glimpse into the fantasy life of nineteenth-century women and there’s no question that it was true to the temper of its time. (You can see some examples of the enthusiastic responses of women in this article Common-Place.org.)

What continues to interest me about Wide Wide World is thinking about the thing that exists within it, but is not seen. That is the compunction Warner – and so many of her sister writers – were under to produce work acceptable to the great god of public opinion. There is no anger in these books about heroines who must face hardship and scorn on all sides. There are no suffragettes – or even abolitionists, as if any public protest must be considered unwomanly. There are no villains, only misunderstood authority figures. There is no revenge, resentment, or conniving – only acceptance of their fate, a brave determination to be the best doggone person they can. It is in this absence of anger, this brave acceptance we see the iron hand of the exploitation and subjection of women of that time.

I wonder what one would see examining the popular fiction of today. I think one would have to be paying careful attention to what was not being said.

By the way, Wide Wide World is still in print. I’m not sure who’s reading it.