This year, as you probably know, marks the bicentennial of the publication of Pride and Prejudice.  And, 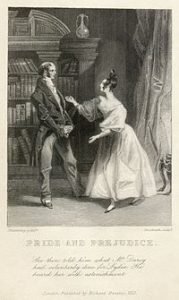 After all this you might think there could be no new angle, nothing left to be mined from the depths of Austen’s Bennet family.  But, think again.  Hint: think “Downton Abbey.”  Think “Upstairs, Downstairs.”  British author Jo Baker’s soon-to-be-published novel, Longbourn, named for the Bennets’ home, focuses on life in the servants’ quarters there.  It features a romance between a footman and a housemaid, and dishes up the downstairs opinions about the upstairs family.  Already, it has created no small stir in the publishing industry, complete with auctions on both sides of the Atlantic, a movie deal and arrangements for translation into at least eight foreign languages.

It seems that domestic servants have stepped out of the scullery and into the spotlight.  They are the new media darlings after years of being shadowy figures bearing tea trays, scarcely seen and never heard.  We seem to especially like them when they work in castles or manor houses and dress better than we do.  The plummy British accents don’t hurt either.  For Americans, certainly, part of the fascination is seeing a system where class lines were so clearly etched.  Our own experience of servants in this country is a lot murkier — muddled by the legacy of slavery, issues of race and immigration and by our wishful insistence that we are a classless society.   To address the topic means facing up to America’s actual pride and prejudice – and, sometimes it’s just easier to look the other way.

But a few American fiction writers have dared to lead us straight into this territory, creating characters, giving them names and voices and stories that make us pay attention.  Most recently, of course, was Kathryn Stockett’s blockbuster, The Help, set in Mississippi in the 1960’s and detailing the lives of two black maids and the young white woman who befriends them.  I was not a big fan of this book—I found the characters too pat and the black dialect overdone – but, obviously, millions of others disagree.  And, I give Stockett kudos for taking on a topic so loaded that a lot of people wouldn’t touch it.  Reportedly, more than fifty literary agents turned down her manuscript before it was finally accepted. 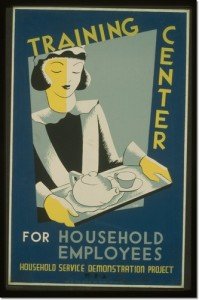 For a more nuanced look at another maid in 1960’s Mississippi, I recommend Ellen Douglas’ Can’t Quit You, Baby, a slow, unfolding and moving narrative about the intertwined lives of Tweet, a black woman, and Cornelia her white employer.  And, in a similar vein, writer Mona Simpson, in her compelling novel, My Hollywood, uses the precarious bond between two women – a young California mother named Claire and Lola, the Filipino nanny who cares for Claire’s son – to give us a window into the world of immigrant domestic workers.

Finally, I give you links to four short stories that you can read online.  The first is by Edith Wharton who was notably ahead of her time in acknowledging the existence of servants in her fiction.  “The Lady’s Maid’s Bell” is gothic and odd and riveting.  Next is Alice Adams’ “Verlie I Say Unto You” set in the 1930’s, a story about a family named Todd and how much they don’t understand about their maid, Verlie.  Ellen Gilchrist has written many stories narrated by sharp-eyed Traceleen who works for Miss Crystal and is unsparing in her reports of her employer’s antics, but always undaunted (and unforgettable).  The fourth story is by Charlottesville writer Kathleen Ford, whose work has been widely published in literary quarterlies and reviews (including Streetlight!).  She writes often about the situation of Irish maids in early twentieth-century America.  The link here will take you to a story about one of these maids and her connection to the infamous Typhoid Mary, who also was a domestic servant.

Not a plummy accent among them, but a chorus of haunting voices, ready to be heard.