Feminist film critic and author Molly Haskell, a Richmond, Va. native, can justly claim fame for her thought-provoking analysis of gender roles, especially as women have been portrayed over time on the silver screen. From Reverence to Rape: The Treatment of Women in the Movies    (1973; revised in 1987) examines the treatment of women from timid innocents and brazen flappers to the sex kittens of the 60s and 70s. Holding My Own in No Man’s Land: Women and Men and Films and Feminists (1997) takes a serious — and witty — look back at Hollywood female film legends and their positive influence on our lives. Frankly, My Dear: Gone with the Wind (2009) dissects seductive survivor Scarlett O’Hara, arguing that “inside the tinkling charms of a Southern-belle saga are the rumblings of a feminist manifesto.”

Still, Haskell, a writer who knows something about gender, identity and the cultural constraints of the South, was in for a shock. Eight years ago, Molly’s much loved younger brother came to visit his sister in New York to share a momentus decision: at 59, he announced that he had “gender dysphoria,” and had chosen to come out as a transsexual and to undergo facial, and genital reassignment surgeries. However liberal and enlightened she may be, this intense and unexpected news hit Haskell hard. Dismay, disbelief, embarrassment, sorrow and endless questions followed. Haskell and her brother — long a reliable and caring family anchor, financial advisor and home maintenance guru– would begin a journey of resistance, change and reacquaintance, each coming to terms with loss and acceptance without an easy ending. Haskell documents their respectful but arduous passage in her new book, My Brother, My Sister: Story of a Transformation (Viking). 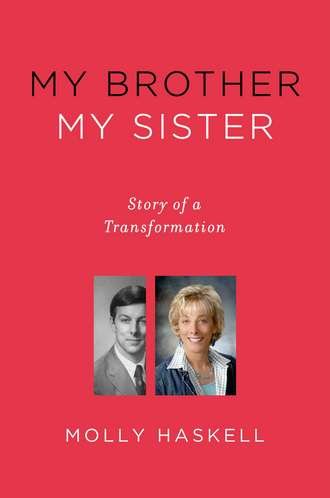 She begins at home, lifting the curtain on a mostly traditional Virginia childhood in which   she was raised by creative and sometimes conflicted parents. She wrestles to understand her sibling’s deep and challenging desires, delving into case histories — Christine Jorgensen to Jan Morris — as well as current scientific research. She confronts her own stereotypes of transsexuals along with the harsh and controversial realities of their chosen lives. Haskell’s brother, John Cheves (“Chevey”) Haskell Jr. – a twice married, devoted husband, and stepfather — would finally get his wish, becoming Ellen Hampton. His transformation brought him to new and vital identity, a brave decision that both brother and sister ultimately come to honor and to admire.