Stranger Among Other Phantoms

Someone invisibly disturbs several finished
Cigarette butts and barely gathers a nod
At the acceleration of a crowd. The ticket
Line’s for impatient aches – there’s no wit to dissuade
The routine. Stalked by clumsy bags and instruments,
Commuters and distance travelers, the rich and
Penny-counters, four handsome students and a fat,
Unscrubbed sort—all defended by miscellany—
Compete for angles and rewards. Mostly,
They fidget and don’t quite ask a question, while glares
Perform the reproof of an agent, who slowly counts
Light change or lengthy tickets and who replies spryly
Only if questions could be glibly answered elsewhere.
It takes a long time to learn the knack
Of acting alone, and standing in line
Is forever. A squatty, scar-nosed man talks for
The febrile rest of impatience, “Can’t you hurry up,
Up there?” The bald-headed clerk in the ticket cage
Sweats terribly, even among sneaking cold drafts,
And bemoanfully misses the ruthful and foreign
Appetite of my glance, so I slur, “Dobbs Ferry.”
He spouts an unconscious, “Gate 3.” Many
To protract a linear course cancel
Each other’s path, and many, hustling to beat
The rush, are actually causing it. Tours, cameras,
Watches, cars, things advertise collective cures;
And brighter-than-live colors liquefy
The places they want us to go. Stock prices
And aseptic tickered reports, besides. Newspaper
Stands, fruit grottos by the gross. Grand Central
Station. Should a more precise voice then lean
To censure one vague and faulty sign, crowds, taking
A cue from the side, could turn on a stranger in
A second if he says something they’ve never heard. 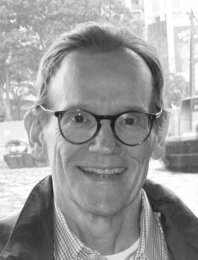 J. Chester Johnson is a poet, essayist and translator. He has published several books of poetry, the most recent of which is St. Paul’s Chapel & Selected Shorter Poems. His work has been published in The New York Times, Best American Poetry, International Poetry Review, Green Mountains Review, Twin Space (Italy), and elsewhere. Johnson has also composed numerous pieces on the American Civil Rights Movement, six of which are included in the Civil Rights Archives at Queens College.