The footloose villages of her own probable Argentina
have been meadowed now and pastured.

If you didn’t know the river,
you might think it doesn’t bite.

I’m speaking of intentions now in
an old suit worn like moss.

Gratitude doesn’t live here.
The cat’s still pretending to be just a cat.

The yellow wolf of uncertainty comes calling.
You don’t even trust your cat.

This requires a landscape but not a real one.
Perhaps the ceiling camped there, and I was invited.

It’s not impossibility that ruins it, but
perceptions higher than

the door in the crook of the word’s last letter.

It doesn’t close till everyone’s inside.
It’s too many people to follow,

but do it anyway. 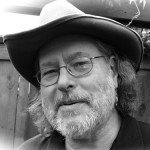 Rich Ives is the 2009 winner of the Francis Locke Memorial Poetry Award from Bitter Oleander and the 2012 winner of the Creative Nonfiction Prize from Thin Air magazine. His book of days, Tunneling to the Moon, is currently being serialized with a work per day appearing for all of 2013 at silencedpress.com. Tunneling to the Moon and Light from a Small Brown Bird (poetry, Bitter Oleander Press) are both due out in paperback in 2014.