Late on a Sunday afternoon, after a nearly eight-hour drive, I arrived at The Porches in Norwood, Virginia. I met my host, got the tour, unpacked my stuff, opened my laptop and stared out the large window in front of my writing desk, which overlooked a porch, and beyond the porch, the mountains. It was then that I noticed several strange, faint noises: a slight breeze rustling the tree leaves, the low hum of my ceiling fan, crows calling in the distance and, somewhere in those endless trees, the low rumble of a train. This glorious quiet—so different from home, filled me with excitement, but also something else…fear. You see there was nothing to do here but write. I’d come all this way, and now it was time to, well, put up or shut up about never having any time to work. A part of me wanted to hop in the car and drive back to Ohio. But I didn’t. I made a cup of tea. I unpacked my milk crate of background reading on topics related to the novel I was here to outline, and I cracked open the first book.

Now nearly a week later, I can’t believe it’s already time to pack up, despite there being so many moments when time went so very slowly. Just this morning, I’ve been watching a leaf katydid on the wicker chair directly outside my window. It has taken her three hours to move her body into a position from which I believe she might be getting ready to lay eggs. I don’t know much about leaf katydids, though I know she is one, based on a photo in one of my daughter’s books. It’s taking every ounce of my discipline to keep working and not Google leaf katydids, though at some point I probably will, and I’ll learn something new. 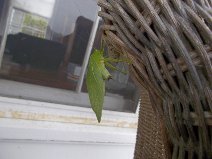 Here are some of the things I learned during my week of writing solitude:

Marcy Campbell’s recent work can be found in The McSweeney’s Internet Tendency, The Millions and The Writer Magazine. When she’s not playing with her kids or working on her novel, she’s blogging as The Closet Creative: www.marcycampbell.blogspot.com