First impressions can be unexpected. Driving into Athens and looking at its poorer parts, my wife and I first thought of Mexico. 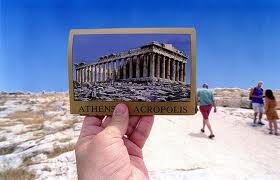 When I went to see the Parthenon, it was soon clear I could never escape a crowd of tourists snapping pictures… I knew its significance, but felt alienated from its actual, physical presence.

At a loss, I wandered into the ancient Theatre of Dionysus where the great plays were first performed in a rare moment when entertainment and a profound impulse to understand man and fate coincided. I found the names of key officials still carved into the stone chairs. 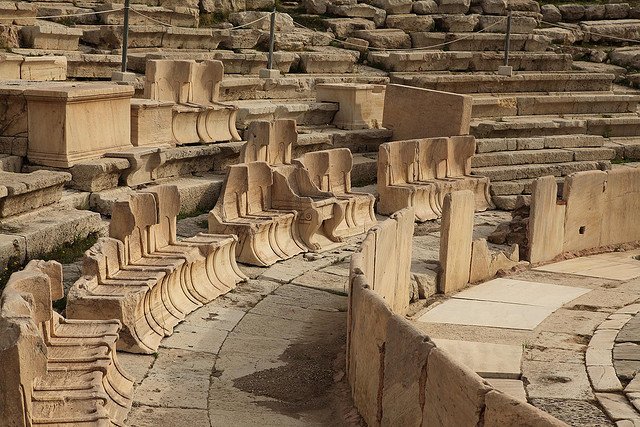 Here the brightest and most sophisticated in Athens had recoiled in terror when Aeschylus sent a Chorus of Furies in pursuit of Orestes at the beginning of the third play of the Oresteia, costumed with such frightening force the great and wise leaped over one another to escape. It was a coup d’theatre on Aeschylus’ part that has lived down millennia. Suddenly I understood, and connected.

I later wrote a series of poems on how I felt connected, as well as how rooted I happen to be in nature, history and their continuity.

THE CYPRESSES OF ATHENS*
Tourists haunt placarded groves as though
immortals puzzled equally by loss
and what endures in this ruin rich ground.

Longer acquaintance might let me name
these sparse, rain-starved trees:
there Agave, blinded by a god,

who tore her son apart with her revelers
when he spied on them, unable to believe
reason could not conquer passion:

there Plato, followed by students
who fail to see how all these are copies
of one perfect Cypress no one can find

that yet embodies seedbud to mature tip,
withered tree to one wrapped in the green
flag of its foliage:

there Oedipus, who died holy though
his children were his sisters and brothers,
buried nearby under streets where taxis

cheat the unwary,
his crimes all efforts to avoid his fate,
that force we make come true.

That cypress whose green is nearly black
is a priest who beheaded old gods:

that a Turk who holds his robes against the wind,

while next to him Byron
who died, despite his irony, for Greece
twists upwards below this severe light.

One day a descendant of mine wandering here
may name some cypress in turn:
‘Ah!  there’s Lance! He always wanted

to balance passion with reason,
desire with desire’s loss,
his life with his death in a tense balance

like one of these cypresses
who thrust out green shoots against their withering,
defiant to the end’.

I wander in their shade as the light pours down;
its brilliant rain ignites a newer jet of green
to replace each that fails and falls

to this parched, incendiary ground.

When we left Athens for Delphi, that sense of connection persisted despite the devastation of Delphi. After being regarded as the center of the world for thousands of years, it was forgotten, buried under dust, and recolonized by a village that was removed when the site was rediscovered in the 19th century, and what was left, excavated. This was where Byron bathed in the Castalian Spring (still there), the Muses’ spring, in which poets have immersed themselves since in homage. 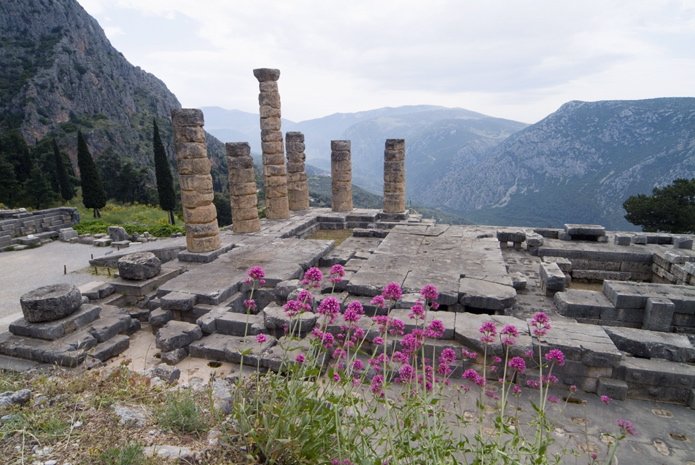 The Temple of Apollo was where two of our central strands were chiseled over the entrance where, within, the sibyl pronounced, in a sulphuric daze, on everything from painful knees to what Athens needed to do to save itself from the Persians— trust in its wooden walls. Athens had none, so built the single most important fleet in Western history. What were the phrases chiseled there into our minds? “Nothing In Excess.” “Know Thyself.”

I cannot bear so much loss.
A few stones, fewer columns,
some tiers of seats, a ruined
arena, a thousand years of faith
gone with the temple where
they carved, “Know Thyself”
over the entrance. That command
still lives in my blood.
I remember the old ritual
and let some fall from a cut
for any shade to drink
and take body from for
an hour, but it is my father
who surprises me here.
“Why have you neglected me?”
he demands. “Why are you
so far from Los Angeles
where your ashes lie?”
“All places are the same in death.”
“I loved you,” I answer,
so many years of anger
spent to let me say that:
“but you hurt us all so pointlessly
and shrugged your guilt away.”
He goes away angrily as
the hot air warms these stones…
Below, groves of olives
paint the valleys graygreen.
Their fruit is too bitter to eat
unless soaked and steeped
until like the hardest memory
we forget their native state,
and eat. I douse my head under
what’s left of the muses’ spring
and shake the droplets off
like a dog when I stand.
What is the world?
that this place, once its center
was so forgotten we had to
dig out it out
to find what we charge
tourists to contemplate?
What is time?
Just now, the water still cold
on my face as I take in the heights,
the  olive-painted valleys,
I know: time is nothing.
My father, nothing
but what I make of him, then
and now.  Myself, nothing
but what I  make, then and now.
I don’t need a sibyl’s fumes
to give me a madness
for others to mine for sense:
the world is empty of everything
but this constant remaking.
Know thyself.
It is almost more than I can bear. 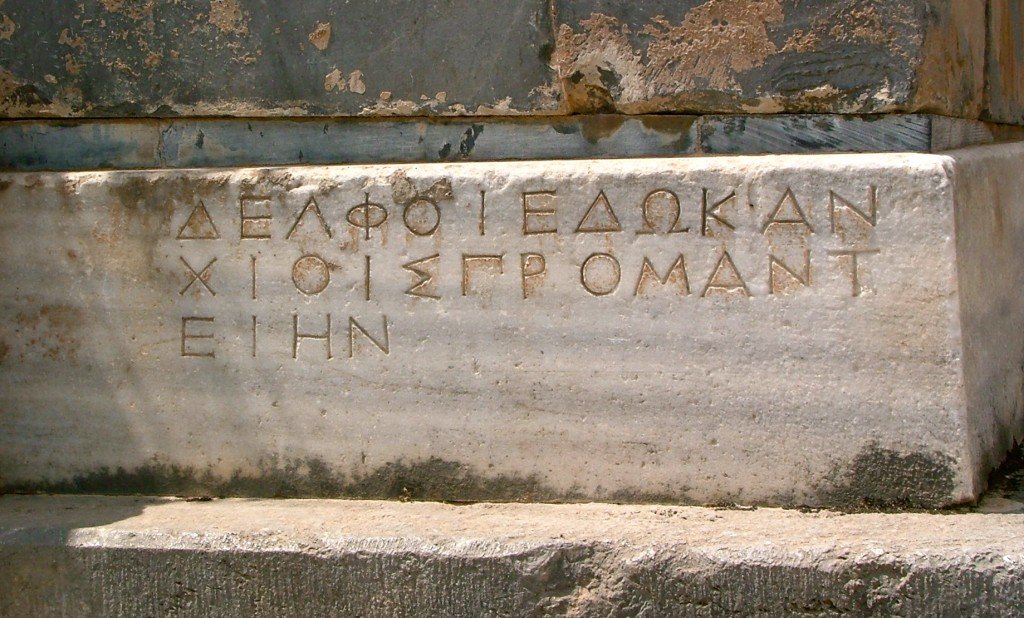 The ritual of blood-letting is a homage to Odysseus in the Odyssey who did the same thing to speak to the shades of the dead, and find a way home. In a way, we are always with ourselves regardless of settings: in another way, the strangeness of some settings lets parts of ourselves emerge from shadow into sunlight and be regarded… And yes, I stuck my head under a spigot of water flowing from the spring.

One afternoon sitting on a bench overlooking the beautiful,  still pristine inner harbor at Ithaka, my eye was caught by a young couple slowly walking into town, hand-in-hand, eyes  only for each other. They gave Ithaka back its sense of history and relevance, otherwise without trace of either, and fittingly, since the Odyssey, as well as the Illiad, detail the over-powering power, menace, and persistence of love.

If this island belonged to me, I would bury all my books and never go away. –Byron

There are more tourists than rain
on more famous islands,
for the centuries sleep in Ithaka,
with no trace of its famous past.
Profuse clusters of grapes hang over
the balcony above the closed
Communist Party office
a block from the harbor
which the town bends its U around,
the houses that climb the hills flashing
in this light,
that light, this water and air

sharp and clear as an edge of broken glass.
I feel as odd in this waterside taverna
as I felt the first night I spent in London
when I walked into Sloane Square’s
King’s Head to the tune of Hotel California,
a Los Angeles boy whose home follows
him everywhere.
Ithaka could be Catalina
with the same chapparal-clad hills,
the same light half a world away,
my head full of stories, like Odysseus’s,
always tempted to think at each landfall

‘I could forget everything here and be
something new’,
yet who stayed himself everywhere
until after twenty years
of wading through blood
he stood again beside his Penelope
and only then remembered
he never wanted to go.
What holds one forgetting to another,
one story to the next, one strange life
to another,
each departure to a return

through and above or below
all the upheavals that make their way
into our histories, stories, dreams?
As I puzzle,
a young couple stroll along the harbor
hand-in-hand,
fresh from love made
in a cool room before the sun
could turn their caresses to sweat-soaked
gropings and groans.
Did they walk this way after Odysseus left,
when the Romans came, and Byzantines,

and Venetians, and Turks, and again the Greeks?
Because their serene walk beside the water
in whose sparkle Aphrodite still dances
gives all those histories, stories, dreams
their ground:
love anonymous except to lovers,
not when swept away
but in those moments when they know
they will share themselves again
to heal the heart’s harms, and complete
the world— love standing
however absence piles on absence
against the tides of oblivion.

Mr. Lee is a Los Angeles poet, playwright and author. He has published five poetry collections with a sixth, Homecomings –including these poems–forthcoming next year. A past Creative Writing Fellow of the NEA, Lee’s poems appear widely in the US and England, including The Antioch Review and POEM, Acumen and Ambit, among others in both countries.

*This blog format does not allow for the poet’s indentations.