It wasn’t until a government agent called me that I realized I was somebody else. Not an impostor exactly, but something like that.

Since birth, I had been Jane Coffin Bradley, a moniker I bore through jibes at my lugubrious middle name and easy jabs like Jane the Pain. If I parried with Jane the Brain, it fell flat, and living in Indiana, it was useless to claim kin with the historic Coffins of Nantucket. (Nantucket was more famous as the launch of a naughty schoolyard limerick.)

Once, when I was seven or so, I renamed myself as I peered into a mirror and tried to see my future: one day, I swore, I would be as glamorous as the girl I imagined myself capable of being. That girl was no ordinary Jane Bradley, no, THAT girl would be … Amy Winter. Later, in college, it was a running gag that my name was Tiffany and I had a boyfriend Jake at Yale. Not a very creative dreamer, I’d say. 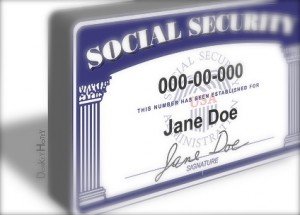 By my mid-twenties, I had married and wrangled with my name again. It was the height of feminism, and there was equal pressure to either maintain my maiden name or assume my husband’s surname. I chafed at the idea of sloughing my own for his, but the ease of conforming trumped my misgivings, and like that I became Jane B. MacNelly. I got a job at The Daily Progress in Charlottesville and gained both a byline and a paycheck.

Just a few years later, after an amicable court procedure in New Jersey, I was both single and Jane Bradley again. Within a few years, I remarried and since then have kept my new-old name through several passports, driver’s licenses in two states, three children, dozens of tax returns and a marriage that will be thirty-three years and counting in September.

Fast-forward to this summer, a few months before my initiation into Medicare, the healthcare Holy Grail. The gateway to all things related to Medicare is the Social Security Administration (SSA), which is where I set my application in motion. A week or so after, the phone rang.

It was the government agent. Mr. Hunt.

“Do you have a Social Security card in your name?” he asked me. My archival skills are mediocre, and a quick search was negative.

“Because SSA officially registers you as Jane MacNelly. In order for you to get Medicare, you have to apply for a new card and prove that Jane Coffin Bradley is your legal name.”

Frankly, I was stunned, since I had shed that old name and self long before. And while my employment records were apparent, the SSA wouldn’t recognize me until I was officially Not Jane MacNelly. To do that, I had to provide a certified copy of the divorce decree.

Of course, I couldn’t find the old divorce papers in my much-moved stash of files. So I was left to wander the court system of New Jersey from my home in Massachusetts. After several hours at the computer, I was on the phone with the Superior Court Clerk’s office in Trenton. A few weeks later, a copy of the 1978 decree arrived in the mail. Right at the end, just above the gold seal, it read: “And further ordered that Plaintiff may resume her maiden name of Bradley.”

Off went the documents to Mr. Hunt, who expedited a new SSA card to me. Some complain about the slow pace of the government, but my Mr. Hunt was crackerjack. He assured me my Social Security and Medicare benefits will kick in right on time and even advised me on how to pick supplemental insurance.

So the cautionary tale here is not about the inefficiency of agencies that don’t communicate with each other (such as the State Department that issues passports or the Treasury that collects taxes) but with the enduring potency of names.

As it happens, the Social Security Administration is all about names. For example, if you go to www.ssa.gov/oact/babynames, you will find a trove of trivia. Right now, we are living in an era of names ending in “a”: Sophia, Emma, Olivia, Isabella and Ava, though Emily dominated the number one spot from 1996 to 2007. Evan Noah has burst into the top spot after a long run of Jacobs. For boys, second place currently goes to the upstart Liam. Mason, William and Jayden have traction.

As for me, I was born when Linda was number one, a post-war spot she held from 1947 to 1952. After 1964, she was gone completely from the top five. By then it was the era of Lisa, then Jennifer, Jessica and two years of Ashley. (For the record, Jane ranks 355 in popularity today, down from 41 when I was born.) http://www.ssa.gov/cgi-bin/babyname.cgi 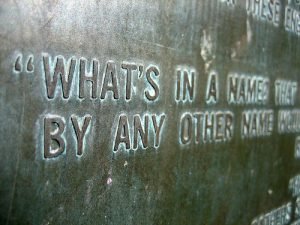 Looking forward, I can’t predict what names will prevail, but I have learned this: in choosing names, we declare who we are, where we fit on the sliding scale of culture and sometimes who we want to be. It is a simple, yet powerful act, one that continues to fascinate and define us.

And really, William Shakespeare should have the last word on all this, since he let Juliet say it best in Romeo and Juliet, Act II, Scene II, from line 42 to 66: http://www.bartleby.com/70/3822.html

Jane Bradley is a freelance writer who started writing in Charlottesville and now lives in Duxbury, Massachusetts.