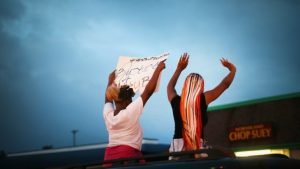 Like many other people, I have had Ferguson, Missouri on my mind in recent weeks. I have been thinking most directly, of course, about Michael Brown, his parents, family members, friends, all those who feel his loss in a very personal way. I have been thinking about other parents who have lost their children, and all those black parents who worry whenever their teenage sons are out in the world and vulnerable. I have been trying to take in the range of emotions that have been on display as people have taken to the streets in Ferguson, and also in many other communities around the country. I think of all those people who have been painted with a broad brush of one sort or another because of their race, their job, their place of residence, or some other category. I have been trying to sort through the range of emotions I have felt as I have responded to one aspect of this story or another. I have let my mind wander to many of the issues that Ferguson brings to mind. Most of them are tinged significantly with race, and I wonder where the idea that we live in a “post-racial” society came from.

There are many reasons not to bring up Ferguson in a brief blog for an online literary magazine. Nothing helpful on any subject related to Ferguson can be said in a few sentences. This is not the place to debate the issues of the day or to provide analysis of current events; still less is it the place for pronouncements or preachments, for casting blame or proposing solutions. There is already an abundance of such words, some of them thoughtful, some not so much. No need for one more op/ed; no need to run the risk of engaging, even unintentionally, in more polemics.

Still, I have questions that Ferguson has led me to think about. Do art and literature live in a world that is insulated from Ferguson? Do unresolved racial issues and unhealed racial wounds make a claim on those who tell stories, craft poems, paint pictures? I am aware of the point of view that any message that may be involved in artistic creation is secondary, perhaps even to the point of being irrelevant. I am not completely unsympathetic to that point of view. If the starting point for an artist is how to press home a point, then the creative process becomes considerably less creative. Art that sees itself as proclaiming a message or serving a cause can cross easily into propaganda. Nevertheless…

I have this thought, admittedly vague, that we would all benefit from having some new language, some additional language with which to explore racial matters. Black writers have helped with this. Many whose writing is in no way mere propaganda have made race a significant part of what they write about because race is an inseparable part of their humanity. There are many African American authors who have addressed me about race, spoken to me out of their African American humanity and led me to consider my white American humanity. Among those who have been most important to me are James Baldwin, a little later Toni Morrison, and most recently James McBride. But the list is a long one, and other people will have different examples of writers who have spoken to them most deeply. 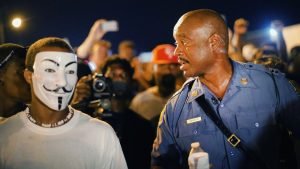 There are not many white authors I can think of who have spoken to me in the same way. For white writers there is a pretense available to them that says to write about the human condition is to transcend something as incidental as race. I feel like there is an emptiness waiting to be filled. Perhaps this feeling is a result of gaps within myself. Perhaps I just don’t know where to turn, and I will welcome suggestions from others who may know of white American writers who write with an awareness of race as inseparable from their humanness. In the meantime, I reside in the emptiness.

Jim Bundy lived in Chicago for thirty-five years as a student, minister, and college teacher. He moved to Charlottesville in 2000 where he served as pastor of Sojourners United Church of Christ for 10 years before retiring. He is the author of two books, one an historical study, the other a collection of sermons. He continues to reside in Charlottesville.