In second grade, I was assigned the role of a Pilgrim woman in the Thanksgiving play.  I wore a dull, gray dress with an itchy, starched white collar and I had only two sentences to say: “Look, look, the Governor is coming.  He is such a fine man.”  Even as a seven-year-old I recognized that this was a smarmy speech and a bit part, but such was the lot of us Pilgrim women.  We all delivered our brief lines and then stood back, pretending to stir things while the Governor and

Squanto got all the action.  I also recall scratching my itching neck and yawning a lot.  After a while, though, I spotted my mother and my younger sister out in the audience and I took a step forward from the cooking pots to wave enthusiastically at them.  The audience erupted in laughter and the Governor, who was in the middle of one of his lengthy, important speeches, got rattled and ended up in tears.

Afterwards, I was in disgrace.  The teachers – and even my own mother—expressed their disappointment.  It was determined that I needed to tell the Governor, a boy in my class named Ronny, that I was sorry.  This I did, grudgingly.  And Ronny received my apology with full gubernatorial hauteur, barely looking at me.  Maybe not such a fine man, after all.   Only my father found the whole thing funny.  For weeks afterward, he called me “Sarah Bernhardt” until I finally made him stop.  I didn’t know who she was but I guessed she was affiliated with the Pilgrims and I wanted nothing to do with any of them ever again.

Now, of course, I do know who Sarah Bernhardt was and I hold her blameless.  But, it turns out that there was another Sarah who may actually have been at the heart of my Pilgrim problem.  I first heard about Sarah Hale in this excellent broadcast of “Backstory with the American History Guys” and then I followed up with a little research of my own.  It seems that everything we know – or think we know – about our “traditional” celebration of Thanksgiving was largely a creation of Sarah Hale, a 19th Century version of Martha Stewart. 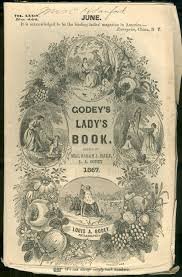 Hale was the editor (or, as she preferred “editress”) of Godey’s Lady’s Book and  for years, she used the magazine to campaign for an official national celebration of a day of Thanksgiving.  She petitioned several U.S. Presidents about her cause and finally succeeded when Abraham Lincoln, presiding over  a war-torn nation decided to give it a try, urging both North and South to sit down for a day of Thanksgiving in November 1863.

So the holiday was born, conceived by Hale and nurtured by her magazine which offered recipes, diagrams for setting the table, tips for decorating.  And of course, the mythology to make it special.  Harvest festivals had long been a part of many cultures, but Hale, seeking to claim this harvest gathering as something uniquely American, and being a New Englander herself, promoted the story about the Pilgrims inviting members of the Wampanoag tribe to share a feast of Thanksgiving. While it’s true that these two groups gathered and feasted together in the fall of 1621, some historians now believe it was more for purposes of treaty negotiations than any form of Thanksgiving.   No matter – the myth prevailed.  It became the scenario that launched a hundred thousand second-grade plays and landed me in hot water.

Still, I’m glad Thanksgiving exists.  I enjoy most of its rituals even if they are based on one woman’s 19th Century ideals.  And as for the Pilgrims, well, I recognize that they were dragged into the story.  I could forgive them almost everything about their role in my fiasco – except for that itchy collar.

One thought on “My Pilgrim Problem”