Chroma Projects enjoyed four exciting years of being able to introduce and exhibit art in our glorious space on the (Charlottesville) Downtown Mall. But all things being eventually subject to change, we had to accept that we needed to find a new way to continue. To keep Chroma alive and functioning under more manageable terms, we transitioned the gallery to our home. 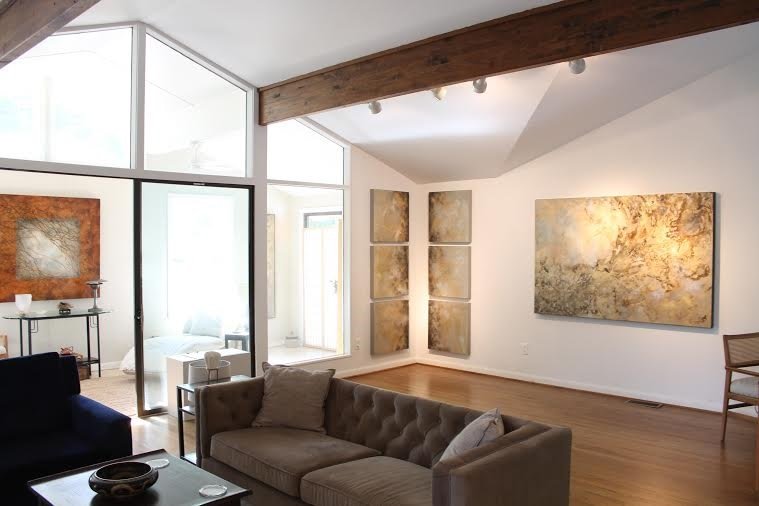 Exhibiting art in a residence is not a new idea by any means, art has been formally presented in manor homes since the Italians initiated the tradition in the 16th century. A century later, the great salons of Paris would become haute fashion in the grand halls, and occasionally even in the palatial bedrooms, of private residences.

Chroma’s new space is not exactly in a grand gilded hall, but a living room, embraced by the wide open space of a California ranch style interior; the artwork installed on white walls that reach up to a vaulted ceiling and clerestory windows.

We bought the house as Chroma was closing because it offered a suitable place for showing art to its best advantage, installing track lighting and nesting the actual “living” part of the living room into a compact area around the fireplace. It is a glorious and guilty pleasure to live with this full complement of art and a modest amount of furniture. In Chroma’s new location, it may be easier to imagine how a particular work of art might fit in the scale of one’s own home. Art is like Christmas trees – they look one way out in the field or the lot, and substantially different when brought inside.

Something has been lost however with the something gained of the transition. Our access to the public is much more restricted now to formal events and appointments to view the shows. Thus we will now be offering regular Saturday hours from 1 – 4. We have lost the spontaneous or happen-stance encounter of people wandering into Chroma as they strolled the mall though, and being part of that dynamic scene. This I miss.

As a curator of contemporary art for some 20 odd years, my directive was always to exhibit art that poked at boundaries, commented on the human condition, tended toward experiment in superstitions and science, sometimes unsealing the envelope of generally accepted aesthetics. I intentionally didn’t always show art that would settle into a home environment with a lot of ease. 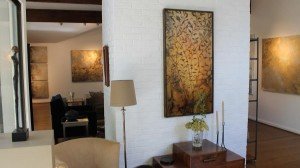 Now, because the work is in my home, it has shape shifted a bit. I can’t show a huge cast iron boulder with a tuning fork; a forest of silk moths going through their life cycle; a totem of off balance chairs, orbs and crucifixes; a walk-in structure made of recycled plaster lathe. Now what we exhibit has to wedge more politely into a home setting. The work we show now will always be committed to expressing its subject matter in uncommon ways, but it will have to better partner with walls and tabletops — use its inside voice.

Our current show, running through early January is Incidences and Situations, featuring J.M. Henry and Aggie Zed. Jim’s richly hued paintings on paper and canvas are concerned with the rhythms and resonances of juxtaposed colors, and the disruptions in the margins between those planes of color. Aggie’s small ceramic and wire sculptures feature her complex creations; odd little humans grappling with the terms of their world, or animals invested with human feelings and expressions, and quite often a mixture of human and animal shapes as well, expressed though permanently affixed masks and puppet hands.

One thought on “Inside Voice by Deborah McLeod”