Photographer Sam Abell is a seeker, camera in hand. A National Geographic staff photographer for 33 years, Abell has traveled from Japan to Newfoundland, from Australia to Russia discovering and shooting life’s “staying” moments. He continues to explore and photograph destinations of his own choosing. Most recently, he joined a dozen photographers on an invitation trip to Cuba honoring the 81st anniversary of Walker Evans’ photographing in Havana. Here too, Abell found dramatic scenarios, vibrant colors and easy camraderie.

“I would say the number one ethos, sensation or emotion that you feel on the streets of Cuba is conviviality,” says Abell. “There’s a highly convivial street life. A lot of warmth, touching, hand slapping, high fiving; complex hand shakes, hugs, kisses and sometimes all of those things.” 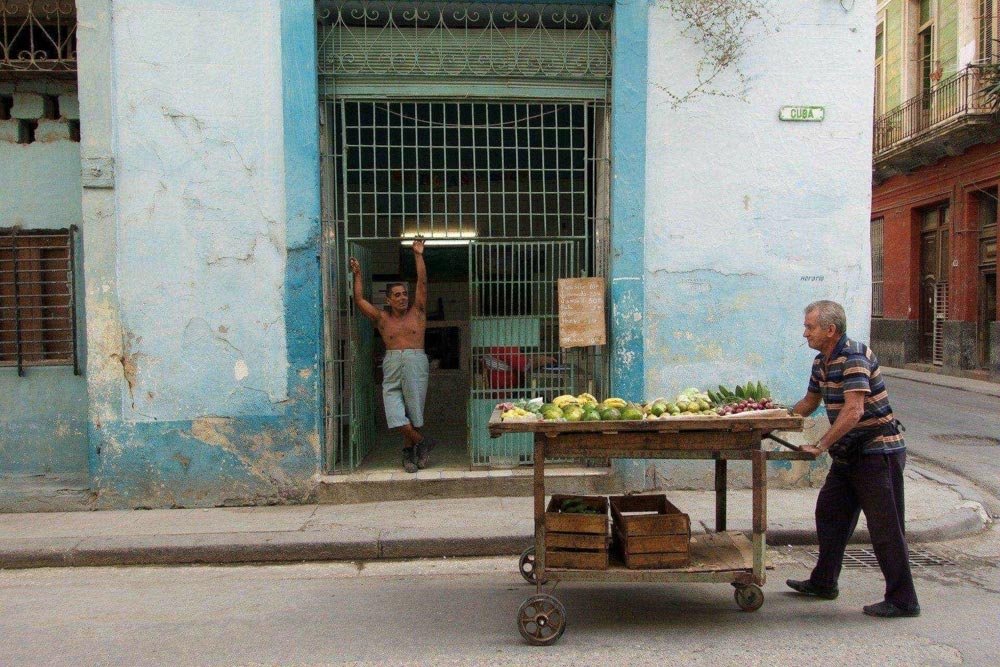 “This photo goes to the immediacy, the conviviality of the street…the vendor and guy in the meat market are greeting. One says, ‘Here comes my friend.’ “A very big part of the place’s appeal is street life. I’ve always been a street photographer and Cuba was the richest place I’ve ever been for street photography,” says Abell who considers himself a disciple with a difference of Paris street photographer Cartier Bresson famed for shooting the fleeting, “decisive moment.”

“The street brings me closer to Bresson. He was after something quicker, faster and more abrupt. My seeing and my technique is slower than his in that I compose the choreo-graphy of the street into the setting in a pretty studied way. And it slows me down. But I suppose I’m trying for my version of the same thing as Bresson — to realize in my finished photographs an eternity. Bresson found it in the choreography of the street and I also find it there.” Abell credits the further influence of documentary photographers Walker Evans, Dorothea Lange and Robert Frank, and perhaps most essentially, American realist painter Edward Hopper. 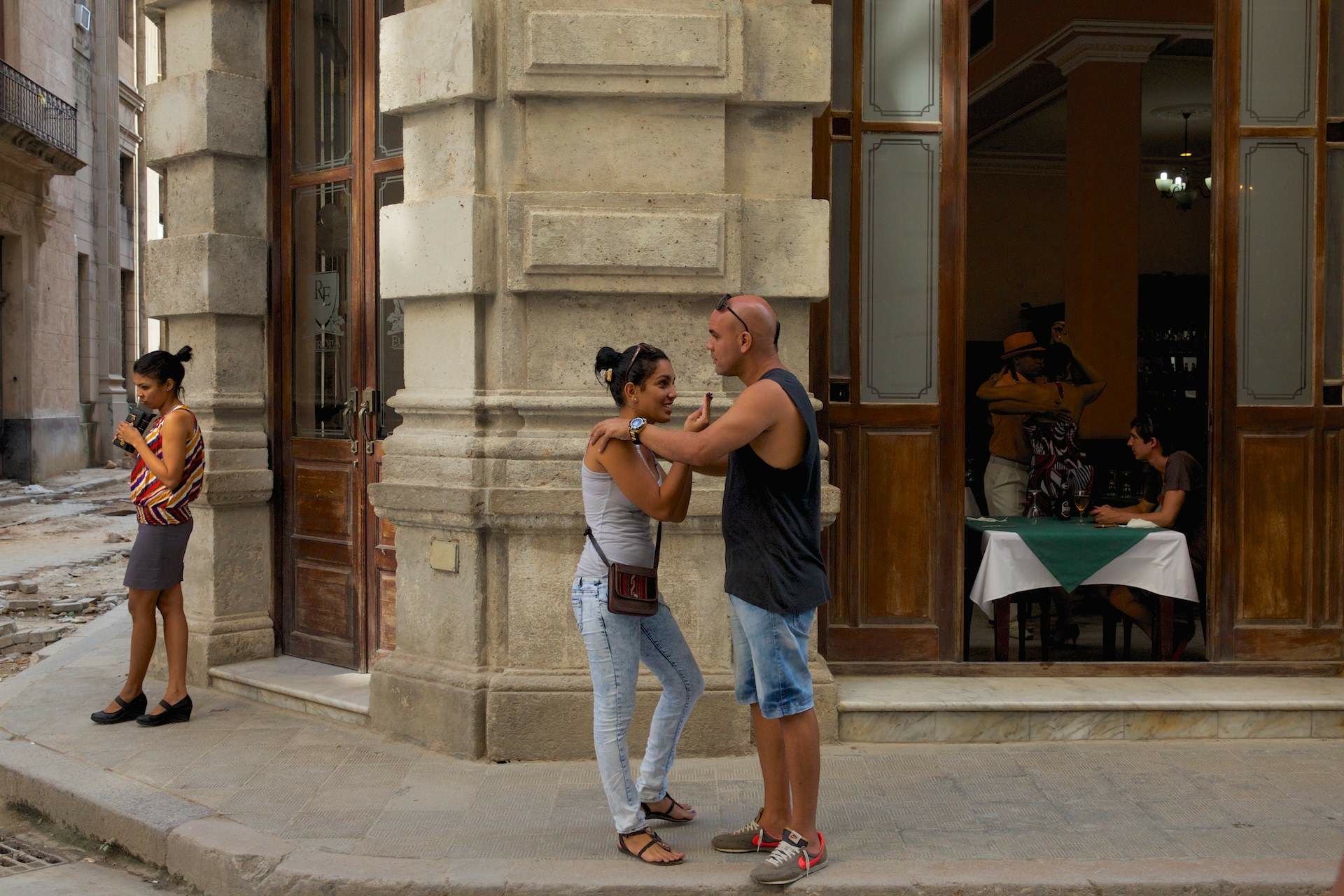 In this street scene, Abell finds choreography in three witnessed narratives: the woman alone; the young couple, the watched couple dancing inside the café. “This scene happened quickly,” he says. “There was a lot of hubbub, people passing by. The photo had to be realized before another person stepped into the frame or into the narrative. The couple is what stopped me. Then I saw the other couple inside and the frame of it. “A very important thing in my photography is internal framing, how people are situated in the structure of the photograph. I photograph from the back to the front. I have to be mindful of the setting in which people exist. It’s led me to my life-long practice of composing and waiting.”

When he happened on a cloaked street conversation, Abell stopped again to quickly compose and wait. “The man was a truck driver making an early morning delivery to a city produce market. But, in typical Cuban fashion, he was having a conversation too. And it was a long one. They were just chatting. He was comfortable in his work. He was hanging. I stepped out of the produce market and instantly saw it as an interesting subject.”

Abell took his preferred “straight away” stance directly behind his subject, and squared up to the scene so that the verticals and horizontals were just so. ‘I seek the horizon line in my photography, and if you get that, almost always diagonals will converge to it,” he says. “That’s my aesthetic, the foundational line. It comes from out of my deep past, my aesthetic education mainly from growing up in Ohio. It was so flat.”

Avoiding a frontal view, Abell often finds peoples’ backs more expressive than their faces. “There’s a world of expression in the way he’s standing. Very relaxed. The slouch, his hips, his clothes, bandana. His stance wasn’t distorted if I shot straight on. Then any deviation from the rigor of that (viewpoint) was the music of the street. It was the poetry.”

Abell shot this informal scene a dozen times, waiting and refining it for perfect “poetics”– the man’s revealing posture as well as the men’s heads at an animated tilt as they conversed on the street. “The editing begins on the street. You’re discriminating all the way through the process, trying to get a result in which everything is as articulated as it can be, all with the goal of making it involving and poetically so.” 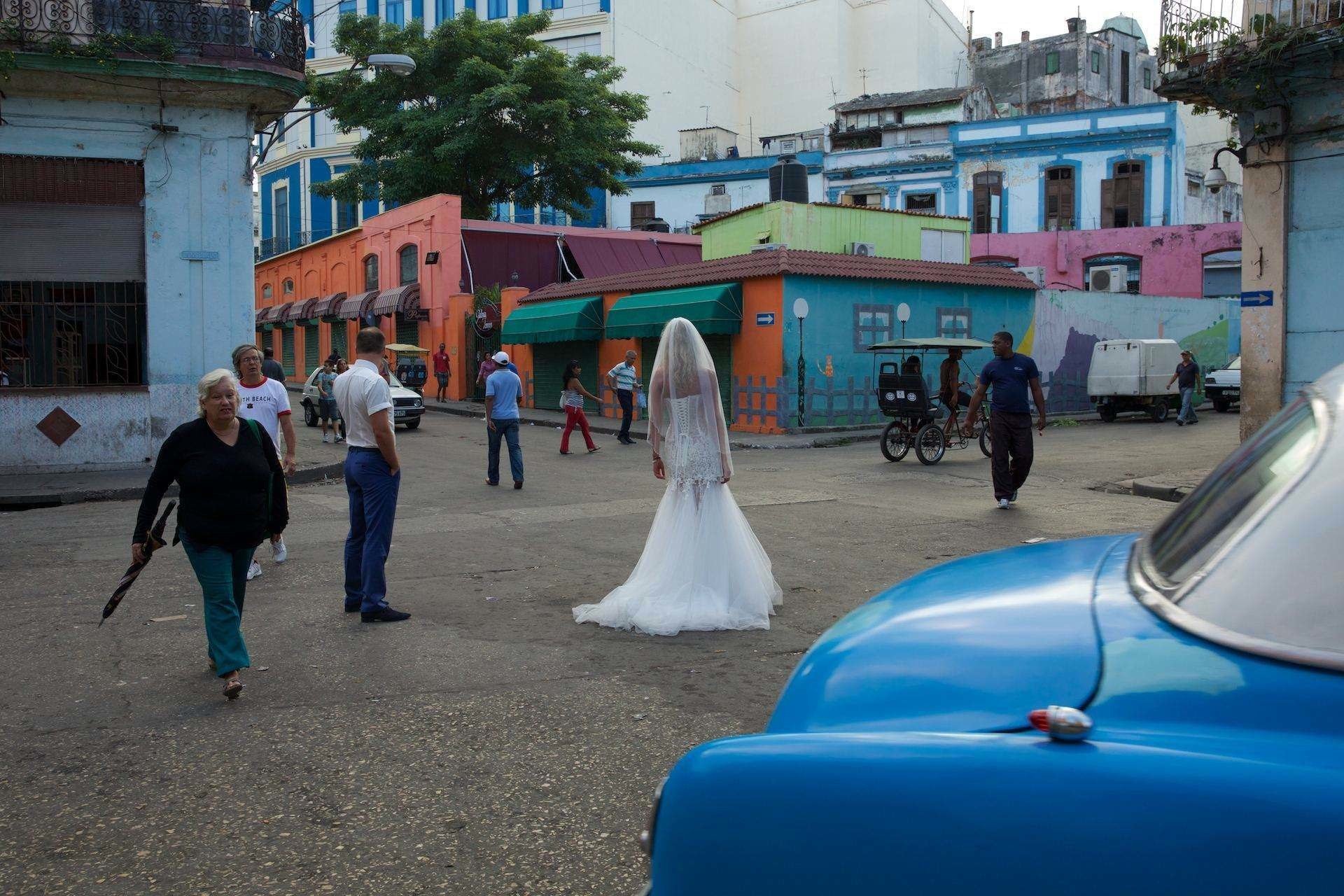 Abell achieves his multiple artistic goals with particular drama in Bride at Intersection. He catches a Russian bride and groom in traffic near the center of Havana. He moves carefully to outline her against the green awning; he waits for the right car to pass. The sensual, aqua blue fenders counterpoint the scene’s many verticals. “This picture really does get the super-dynamic version of Cuban street life,” says Abell. “As soon as I saw the bride, I instantly thought, ‘What’s the background?’ And then this car came by. As she moves, I move.

“When I internally frame someone or something, I want the picture – at the highest level of attainment – not to look worked on or even dwelt upon – but to look inevitable. Inevitableness is the highest ideal. There’s nothing accidental about where she’s standing relative to what’s right behind her. That’s what I mean by inevitable.”

And always on the lookout, Abell finds more such “inevitable” and intriguing subjects in Cuban faces. 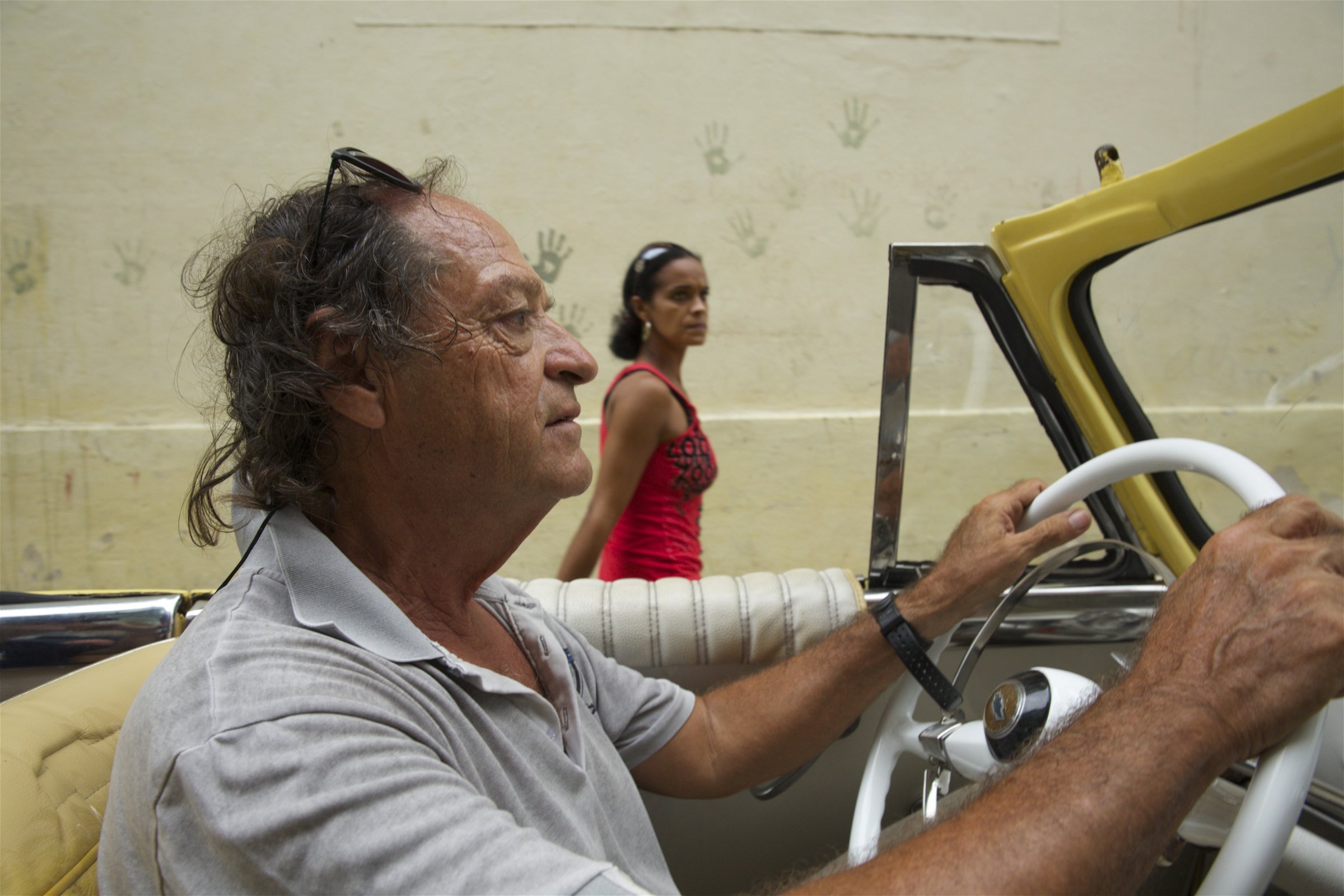 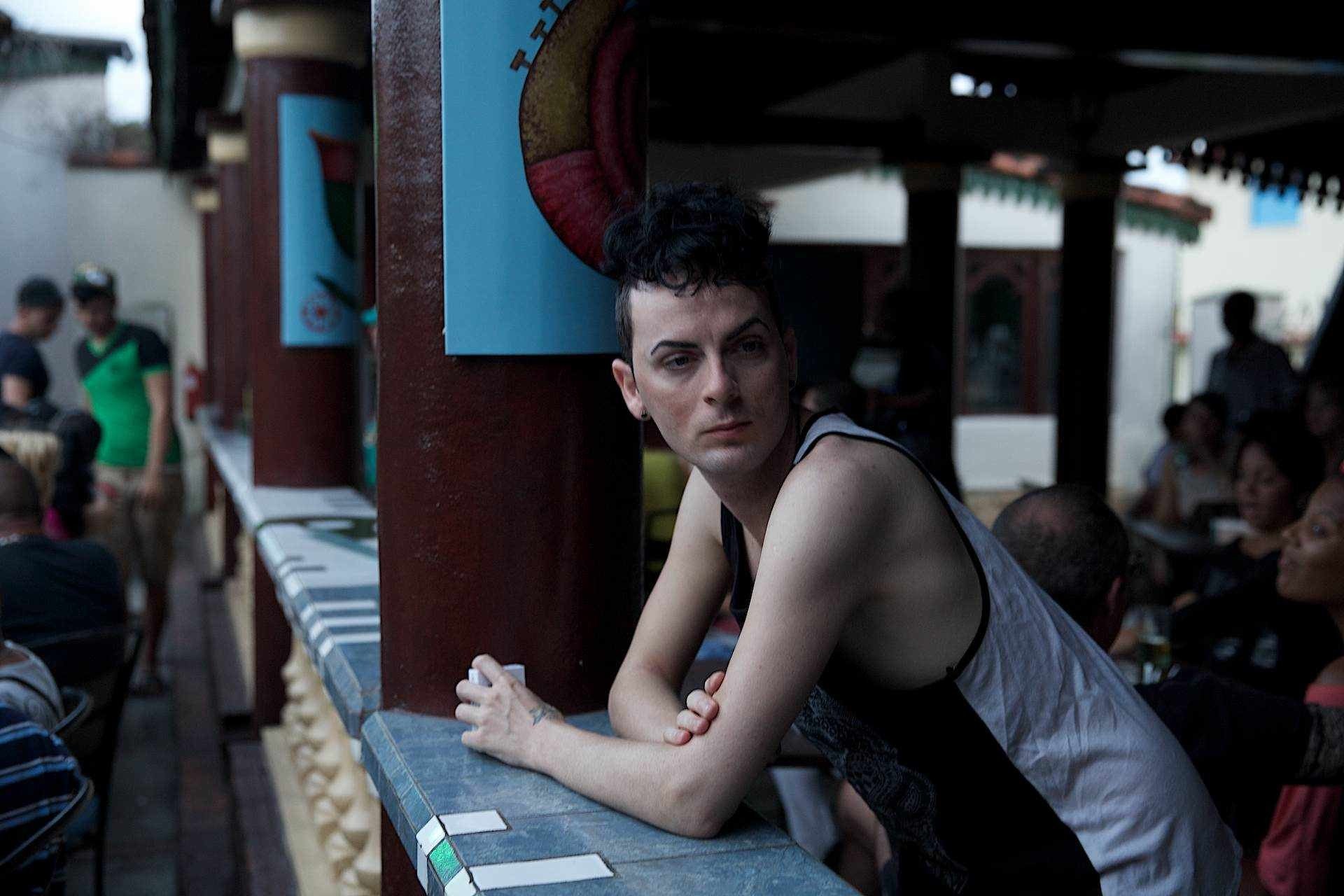 At a dance revue in the provincial town Vinales, Abell saw this young man at the bar. “This was a tough picture for me to take because of fronting up this individual,” he says. “He’s looking for someone; he’s trying to recognize someone coming into this place. He was in his own world with an intensity. He’s wary, vulnerable, watchful. It’s not completely in my style, but I found him compelling as a psychological subject.

“A picture,” adds Abell, “will be successful if it’s complex and it still works. When you encounter the image, it clicks, so to speak, immediately. You feel the resonant, deep goodness of it or you have a quickened sense of involvement with it.”

Encountering a Cuba in transition, Abell imagines its losses and gains as trade and modernization move in. “The takeover of individual lives by (electronic) screens has not taken place, but it will take place. That’s one of the throwback things you feel in Cuba…the humanity, the humanism as opposed to the triumph of technology.” 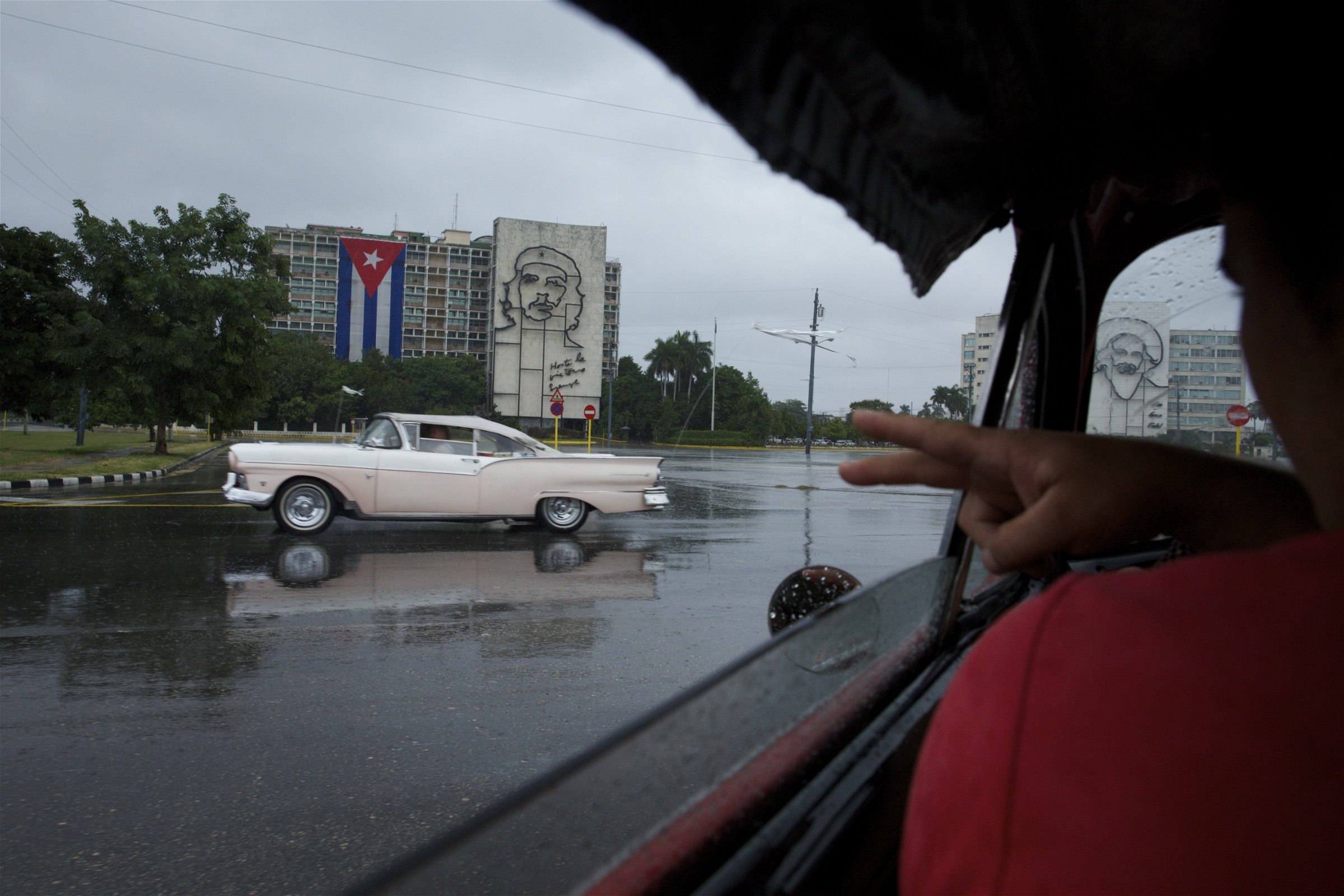 Poverty is evident and government buildings still display outsized sculptures of Che Guevera and other “maestros of the revolution.” Although Obama’s easing of relations with Cuba had not taken place during Abell’s visit, he sensed a deep desire for change. “There was a wish for things to be normalized. Rapproachment between the governments. Everyone said, ‘It’s only the governments keeping us in two different worlds. We the people of Cuba like you the American people.’ And American people like Cuban people. There seems to be universal good feelings on a people to people basis. Cubans want to go to Florida. They talk about Miami and Disney World. The U.S. is only 90 miles away. They didn’t expect change so fast. The thought was that Obama wouldn’t get to it. But Hillary would.” 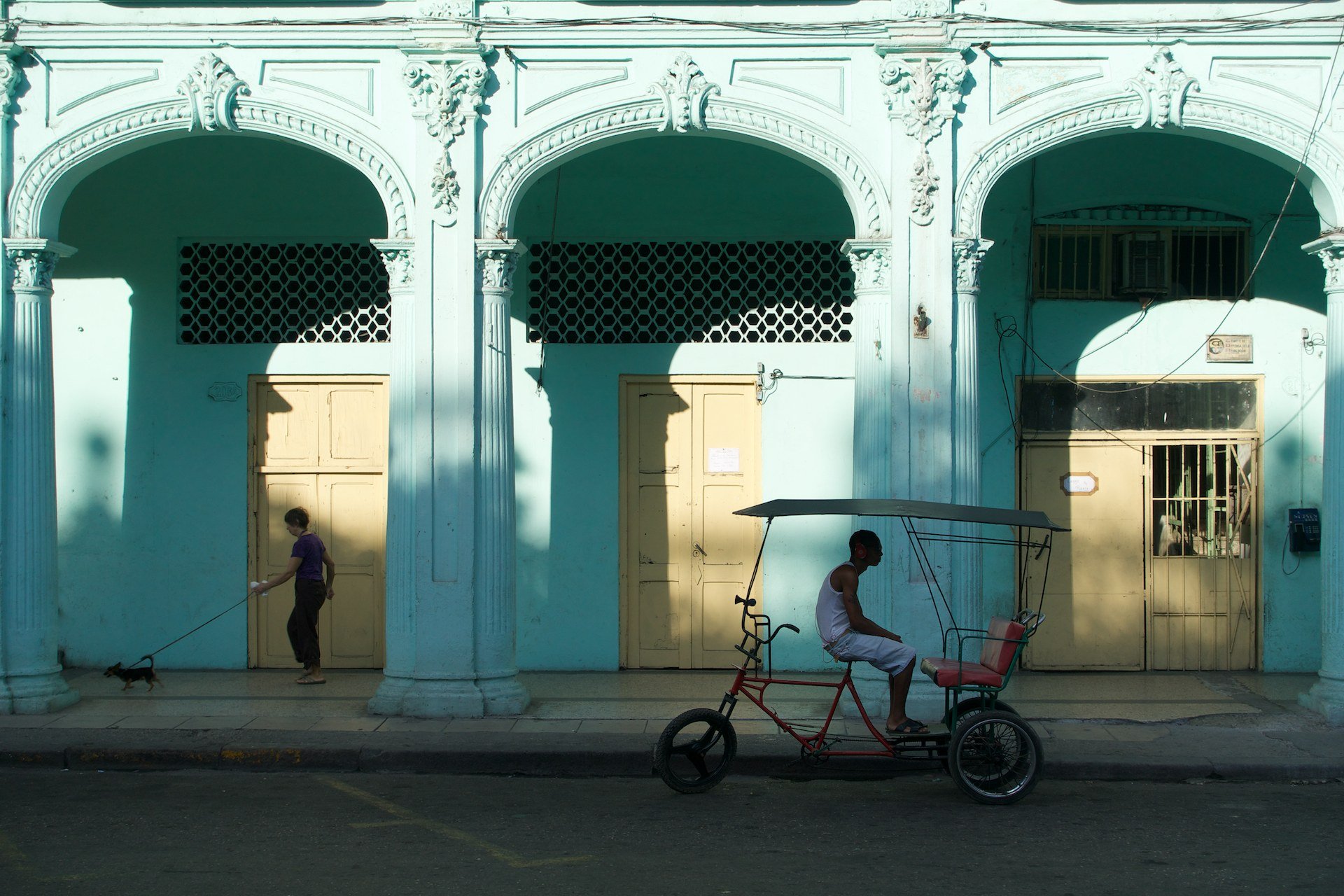 For now, Abell, a resident of Albemarle County, VA., remembers and shares the haunting sights and rhythms of today’s Cuba. “There’s a Caribbean, trade winds atmosphere, strongly influenced by decay. The decay is contradicted by the vibrant spirit of the people. Havana is very lively during the day, and at night because of the street life, the clubs and bars. The night has a ‘noir’ feeling since it’s not overlit; the electricity is not always on. There’s a moody atmosphere.” 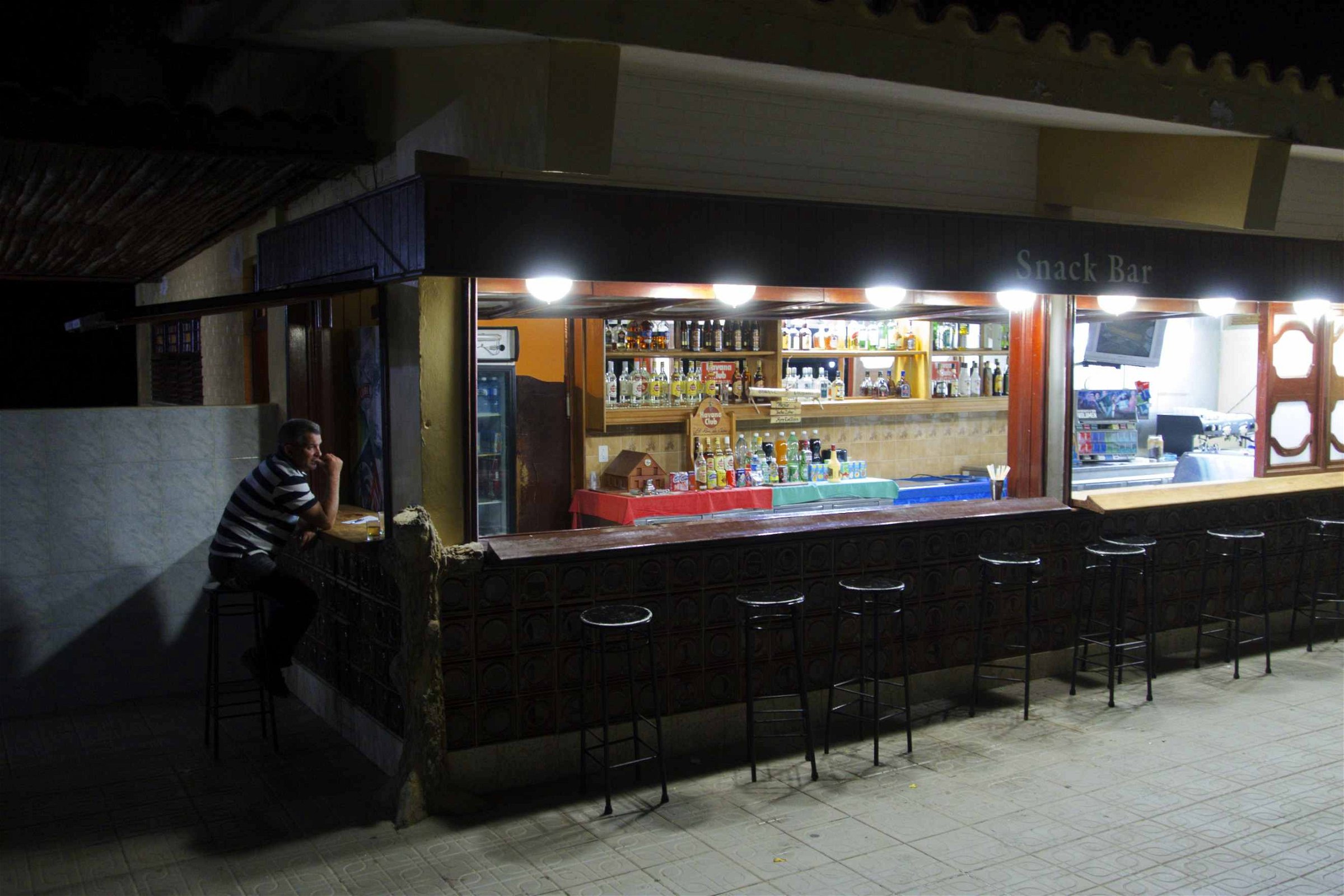 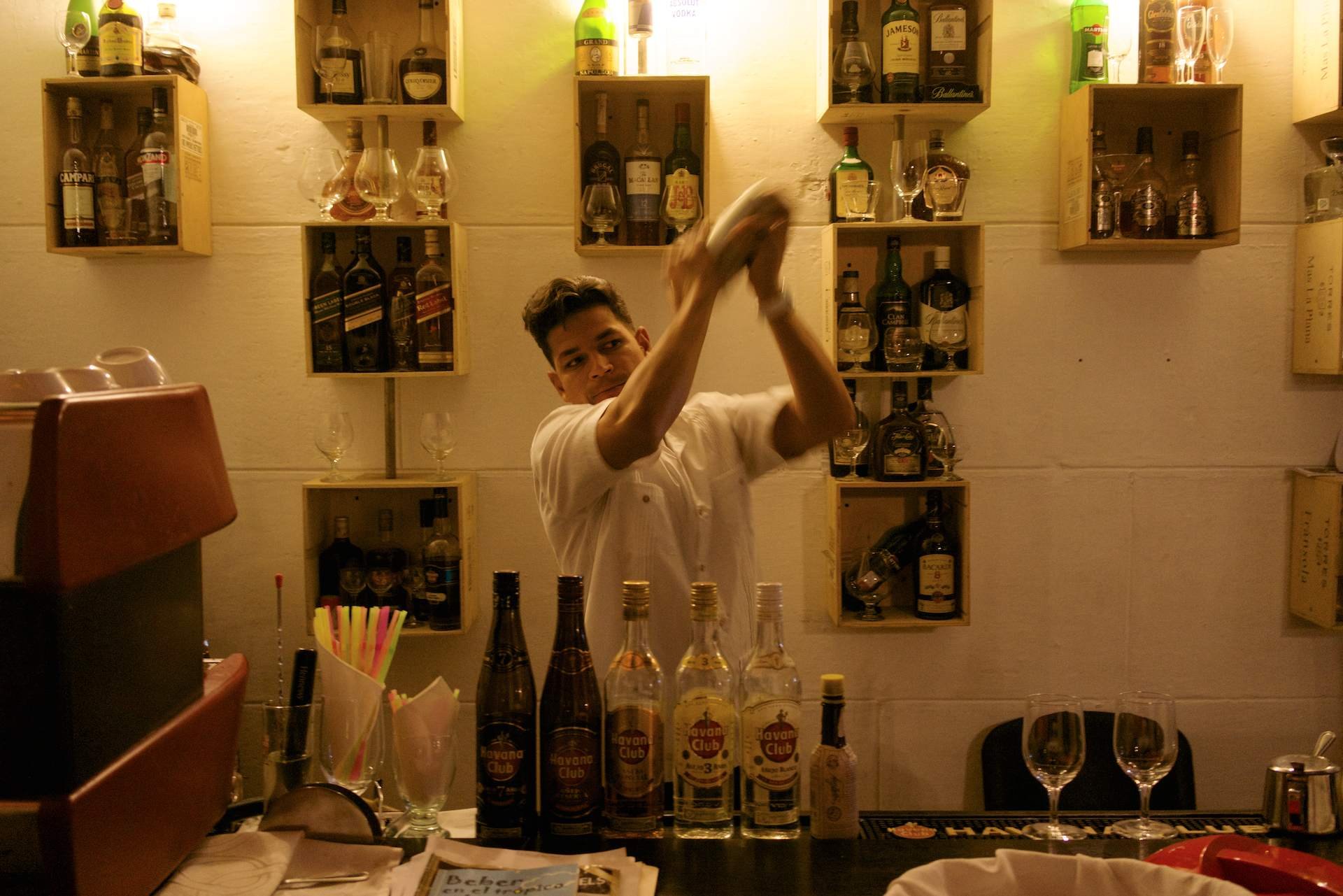 A future exhibit will showcase the many images of photographers, including Abell, whose recent work was shot in Cuba. In the meantime, Abell continues work on a 10-year American History Project, taking photographs that mirror significant change across the country. Abell’s earlier photographs are featured in numerous issues of The National Geographic as well as some 20 books including Seeing Gardens, Stay the Moment and Sam Abell: The Photographic Life. 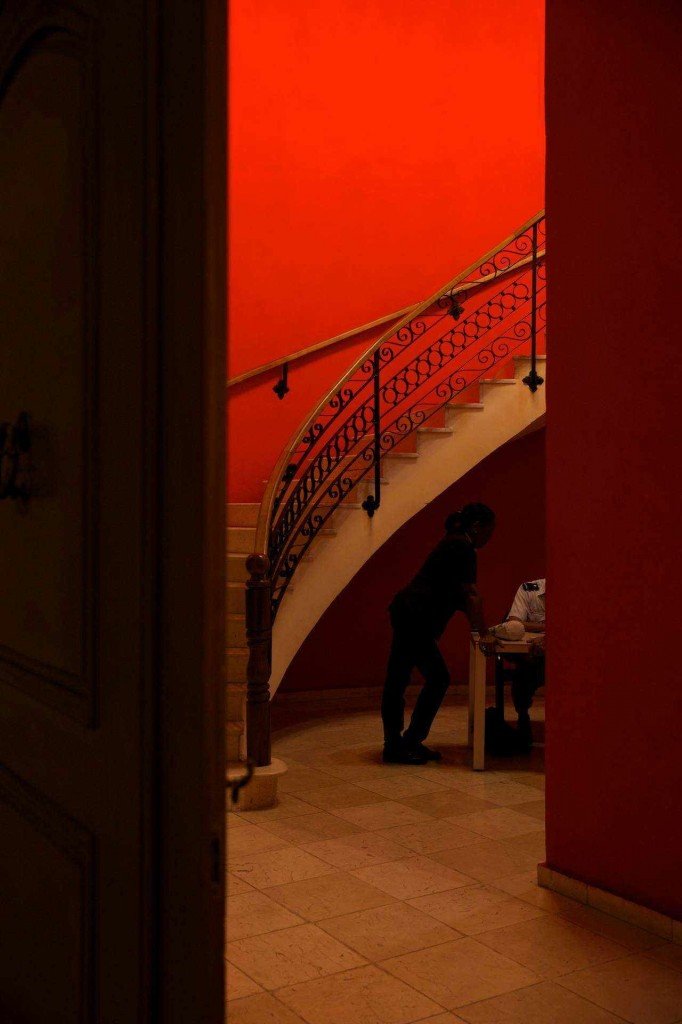 all photographs copyrighted by Sam Abell