A Wild Thing And A Tended One

marbles with the ball joint
of your right shoulder. Last time

I tried to tell you about the guy
who came in the Deli, duct tape

holding his shoes together, carrying
this tarnished bird cage, a finch inside

to sit next to regulars, who shifted
their metal chairs, and how the ice machine

dumped cubes into the fountain,
its avalanche spooking the finch

who beat anxious flutters against the bars,
but got quiet, as a finch-pecked finger

reached to stroke its flustered crop.
You said, Interesting, like I was rambling

about the Cocker Spaniel watercolor
almost impaling itself on the spindles

of your fake desk cactus. The point
being, that I’ve counted four birds

just since May on the sidewalk
in front of the store, necks broken

from flying into the glass,
every single one with their eyes open.

I would run to this hayfield,
when I was little, beyond the taming fences

of my neighborhood, before bailing season
when it was thick with wheat

and stand defiant in the middle of its neutral
texture, brush splayed fingers

over the stalks’ dull braids, flocks
of birds, like wind-blown scarves, receding

across the in-between sky. That was before
the lake road, your Toyota

horseshoed around an oak tree, the early phone
call, the stamp of my time card

when I went to work anyway
because nothing stood still the way it should’ve.

if I was alright, her hand out, waiting for change.
I cried before remembering the 23¢,

having thought, for a minute,
that she reached her hand across the counter, hoping

I might take it. At the memorial I told a story
about the Pee-Wee football dance,

the corsage you bought, that it didn’t match my dress.
Later, when I looked at the picture,

I realized I lied. It was a red wound
on my chest, perfect against the pearl fabric. Why

without the cowlick I got from fuschia-handled scissors
in Kindergarten, or the scar on your knee

from when you busted it jumping a blue cooler
at a party? Why did no one tell us

the colors of days run together,
that we could be lost in the scenery of each other. 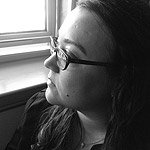 Maari Carter hails from Winona, MS and is currently pursuing an M.F.A. in Creative Writing at Florida State University. Her work has appeared in Steel Toe Review, The Boiler, and Superstition Review, among others. She is the recipient of the 2014 Philip Booth Poetry Prize awarded by Salt Hill Journal and serves as Business & Promotions Director for The Southeast Review.