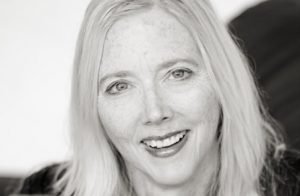 Whenever I run into Lisa Russ Spaar she seems scarcely to have aged since I first met her, eons ago, in Gregory Orr’s graduate poetry workshop at the University of Virginia. Tall and lithe, with long blonde hair she pushes back from her face and a vibrant, lovely smile, Lisa could easily be taken for a grad student. But as we all know, looks can be deceptive, and Lisa Russ Spaar has come a long way in the years since our first acquaintance. She is a much loved professor of English and Creative Writing at UVA, the author of four books of poetry Glass Town (Red Hen Press, 1999), Blue Venus (Persea Books, 2004), Satin Cash (Persea, 2008), and Vanitas, Rough (Persea, 2012) and the recipient of such prestigious awards as a Guggenheim Fellowship. 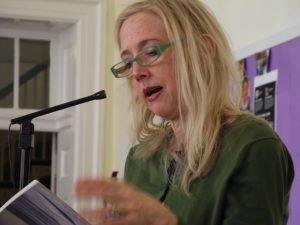 Her fifth book, Orexia, which will be brought out by Persea in 2016, was the subject of a literary salon held at WriterHouse, Charlottesville’s mecca for local writers, on April 19. Before an enthusiastic audience, Lisa was interviewed by poet Kyle Dargan, a former MFA student of Spaar’s, now the author of four books of poetry and assistant professor of Literature and Creative Writing at Americans University. “Orexia” means “desire” – the opposite of anorexia, a subject which Spaar has struggled with in her personal life and wrote about in her early collections. Spaar’s new book, deals with the desires of middle age. She writes:

My season is upon me.

Green in there somewhere, yes,

even red, if I hash around?

Spaar says that all of her poems are about desire. She notes, “The desires of a child are more or less known by those who must fulfill them. Afterwards, we need language to get what we want.” She fulfills the sense of what she lacks through poetry, which gives her the “illusion of control.” When an audience member asks how she deals with the obstacles to fulfillment, Spaar affirms that there are many obstacles, but that poetry keeps the process of filling the empty hole going.

When it comes to the relationship of poets to desire, Spaar sees Rumi and Emily Dickinson at opposite poles. Rumi revels in fulfillment, lifting glass after glass in the tavern of life. Dickinson, on the other hand, wants to be hungry. Spaar quotes her beloved ascetic, who discovers:

That Hunger – was a way

Of persons Outside Windows –

That entering – takes away –

For Dickinson, the “banquet of abstemiousness” is the desiderata, keeping her in a state of delicious expectation. Spaar appreciates this, yet, in her own work, seeks a mixture of Dickinson’s hunger and Rumi’s joyous satiety.

Kyle Dargan asks her, “Who’s your roadrunner?” – referring to the famous cartoon character, who always manages to evade Coyote, his pursuer. “What do you keep chasing?” Spaar replies that she has had a lifelong obsession with the body. “I keep looking hard at the world,” she says, “obsessed by the beauty and mystery of the world but unable to express it.” Once, when she was on an academic committee and was asked how she carried out research for creative writing, she replied, “When I run at night I peer into people’s windows.” 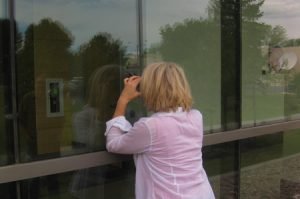 If, in her early poems, Spaar tended to write about her family and her anorexia, now, she believes, she has moved to “a fine minimalism.” The mother of three children, she notes, “Kids force you to write shorter. My poems today are more textured, more compressed.” She tells an anecdote about her daughter when she was little “I see you have a penis,” said her daughter to a man in a fancy bank whose waist she came up to. “Like my children,” Spaar confesses, sometimes my poems don’t behave as I’d like them to.”

How do you deal with disappointment, an audience member follows up. How do you keep from descending into constant lament? In reply, Spaar quotes Adrienne Rich, who said that she’s always “fighting the temptation to make a career of pain”. Then she adds, “Stay attuned to the world and the seasons.” How do you handle worrying? someone asks. Spaar replies, “Worry is a kind of prayer.”

Toward the end of the salon, an audience member raises her hand. “How do you write about pain?” she asks. Spaar doesn’t hesitate: “Write figuratively,” she advises, “make something that’s not the pain.” 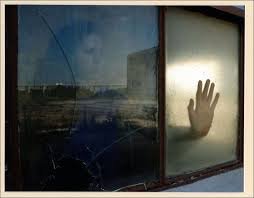 A ONE NIGHT STAND NOT TO BE MISSED

Art lovers of Albemarle and beyond! Let’s gather on Saturday, May 9 for The Commission, the Virginia Center of the Creative Art’s 2015 unveiling of Glass and Bridle, Pomegranate and Pears: On the Viability and Transience of a Free and Perfect Union. This year’s site specific installation celebrates the winning collaboration of multi media artist Brice Brown and composer Alan Shockley.

A New York resident, Brown’s work is included in collections at the Speed Art Museum, the Baltimore Museum of Art, Dartmouth College, Swope Art Museum, and Yale University. Brown says his work “explores the instability of the objects and environments we encounter by focusing on moments of transformation between states of being.”

Shockley is currently Director of Composition/Theory and an associate professor in the Bob Cole Conservatory of Music at California State University, Long Beach. His recent compositions have been for the California E.A.R. Unit, a virtuosic solo work for flutist John Barcellona, and a work for violin, cello, and piano for Trio Terroir. His electronic works have been installed in Jack Straw Studio’s New Media Gallery, Seattle, Minneapolis’ Weisman Art Museum, in VertexList Gallery, Brooklyn, the Electronic Music Foundation, Manhattan, and are played worldwide with Vox Novus’ 60×60 Project. Shockley notes that his works are “often experiments in musical form—attempts   at tailoring the form to the material, resulting in a unique shape for each piece, and one that the composer hopes ‘works’ in a strange and individual way.”

View the unveiling of Brown and Shockley’s collaborative imaginations for one night only, starting at 6 p.m., Saturday at Adventure Farm, Earlysville, VA. An art raffle and live art auction will also be featured. Click here for more information.