Birds in residence are the stuff of metaphors and dreams for New York City artist Dina Brodsky.

Mysterious feathered fowl — from crows to blue jays — land in unexpected interiors, their residencies somehow natural as well as disturbing. “The current series — One More Shelter — shows abandoned places, buildings given over to decay and entropy, yet still containing the memories of its former inhabitants,” says Brodsky.

“Albuquerque is a painting based on an incredibly formal, beautiful, and unusable dining room I saw in a New Mexico house. I imagined what the room and the objects would look like with the passage of time, what would happen to the paint, the tablecloth, the chairs. The painting represents time and the possibility of loss. The birds are witnesses to what once was.”

Another small scale Brodsky painting, Off Northern Boulevard, was also inspired by “a formerly grand but vastly deteriorated mansion at the very tip of Long Island. The windows were mostly broken, and a pair of blackbirds had built a nest in what was the bedroom; they were flying in and out freely. I was fascinated by nature’s reclaiming of something that humans had put a lot of thought and energy into building, then proceeded to abandon. I use the imagery of vacant and abandoned places to explore the private histories of their former inhabitants.

“I’ve been attracted to birds as long as I can remember, but in this series I use them as a stand-in for human beings. The crows are incredibly intelligent and interactive, and also they feature in a lot of Russian folklore and mythology,” says Brodsky, 34, a native of Minsk, Belarus. She immigrated to the U.S. with her family in 1990 and now lives in New York. “I feel New York is a city of immigrants and expatriates, of migrants and pilgrims – a place to lose your past and find your dreams. It is a city in which time itself is accelerated, and transformations can happen instantly.”

Brodsky migrated to the city after receiving her BFA from the University of Massachussetts, Amherst. She earned her MFA from the New York Academy of Art where she studied classical painting — the technique of 15th century Flemish oil painting that involves a terra verte underpainting topped by many layers of glaze. She combines classical technique with contemporary materials including mylar and plexiglas. She mixes photo-  graphy with painting from life as well as mimicing some imagery (light and texture) from paintings by old masters such as Vermeer and Van Eyck. Among contemporary artists, she particularly admires works by Vincent Desiderio, Antonio Lopez Garcia, and recently discovered, Raqib Shaw.

Although Streetlight features Brodsky’s birds, her work spans a broad and challenging spectrum — still lifes, city and landscapes, nudes, animal studies and self portraits. “In retrospect,” she says, “I think that I spent the first 10 of the 14 years that I have been painting trying to acquire the technical skills I felt were necessary. It is only over the last few years that I’ve felt I could stop concentrating exclusively on technique. Since then, my paintings have become more internal, more about capturing a mental state rather than purely trying to master a set of skills.

“Right now I am working on this series of abandoned house paintings that are drifting further away from any real place, and are becoming more of a metaphor for time and memory. I am interested in the the places left behind, where time slowly transforms both physical objects and, eventually, memory itself.

“I’ve always been attracted to miniatures, starting with an Islamic miniature painting class, and proceeding to a fascination with medieval manuscript illumination. It has been an organic decision for me to paint small. The miniature format, and the compulsive attention to detail inherent to my techniques, forces the viewer to look closely at a painting and pay attention to quotidian details that otherwise would get overlooked.”

Brodsky’s delicate and finely wrought miniatures will be featured May 13 to June 18 at the Island Weiss Gallery, 201 East 69th Street, New York.

She has taught privately and at the Castle Hill Center for the Arts, the Brookline Art Center and the Metropolitan Museum of Art. Her work has been shown from London to Basel, Switzerland and Santa Fe, New Mexico, In September, her paintings will be shown at Galerie L’Oeil du Prince in Paris.

Brodsky’s theme of “abandoned beauty” was also the subject of Russian born Roman Sirotin, a photographer and multi-media artist now living in Ohio and featured in an earlier Streetlight blog.

The long anticipated new Whitney Museum was worth the wait. Opened May 1st, the eight story, innovative structure designed by Renzo Piano on Gansevoort Street in Manhattan’s Meatpacking District, offers the widest of views, East to the Empire State building, West to the Highline walkway and the Hudson River.

Broad galleries show off the Museum’s extensive collection of American art. Its inaugural exhibition, America            is Hard to See, spans works of all mediums of the 20th century, chronologically following the development of American art from 1910 to the present; the top four floors are each devoted to a different era. 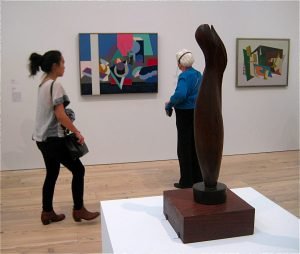 The historic collection begins with images of the Machine Age in paint and photography and progresses through the decades with works by Edward Hopper, Alexander Calder, Abstract Expressionists Willem de Kooning and Jackson Pollock forward to graffiti artist Jean-Michel Basquiat and the fluorescently lit vacuum cleaners of Jeff Koons.

The expansive space is lofty and elegant, giving breathing room aplenty for visitors to stride easily from gallery to gallery, floor to floor with stairs inside and out. Natural light filters in to an uplifting and exhilarating effect.