At the old house, Leslie had walked to school. Here, the school was closer, but she had to take the bus. The old house had been on the outskirts of a smaller town, not a former murder capital of the world. Leslie’s mother had grown up just a few miles away from the new place and worried about drug crime crossfire and dirty old men. “It isn’t safe,” was her excuse for everything. “Trust me. I know what I’m talking about.”

The two of them had moved right before the end of eighth-grade, in time for Leslie to make a few friends before the long summer break and the beginning of high school. “Don’t leave the neighborhood!” her mother shouted after her when Susan from down the street, came calling. “And be back by eleven!”

With the divorce still so fresh, Leslie’s usual summer plans – sleepaway camps, swim and tennis teams, horseback riding day camps – had gotten lost in the confusion of who was to pay for what and who would drive. Leslie didn’t mind missing out on the camps. What she minded was the chronic sameness of the open-ended days and the beep-beep of her cell phone’s alarm, five minutes ahead of curfew, always cutting short her nights. The only chance for any excitement was Robby Newton, the neighborhood fifteen year-old mystery boy, who seemed only to come out after dark. Susan and Leslie managed to track him down nearly every night.

Tonight, they found Robby down by the basketball courts. First, they shot baskets with someone’s lost tennis ball. Then they plunked quarters into the tennis court lights and chucked the ball back and forth across the sagging net before Robby beaned it into the woods behind them. Then they walked around the backyards of Lester Street to visit Mrs. Foster’s kittens under her deck. Tonight, there were only four. Robby cupped one into his hand and flipped it over to show how its eyes were still closed, how its body clutched in toward itself like it hadn’t finished uncurling from its momma’s belly.

The humid air clung to them, leaving their skin moist. Mosquitoes nattered at their ears and noses. Moths and gnats thronged every street light, banging for their share of the brightness. All Leslie wanted was to stay out late enough, at least one night, to get Robby all to herself.

This summer, she had grown out of everything: shoes, shorts, training bras. Surely she’d grown into something, too. Even an extra fifteen minutes on her curfew would have seemed like recognition of that. “There’s nothing but no good going on out there after eleven,” was the answer any time Leslie brought up the subject, as if all the drug dealers and perverts poured onto the streets at the single stroke of a minute hand. What did eleven o’clock have to do with any of that?

Robby could stay out as late as he wanted. A little after ten, he led them all into the woods. He and Leslie matched strides through the dark, ahead of Susan. The bristle of Robby’s arm hair against Leslie’s sent a thrill through her.

“You can’t even see the poison ivy this way,” Susan complained.

Farther into the woods, the last of the evening’s lightning bugs blinked on and off, flashing bright halos of light into the thickening dark. Leslie would break curfew tonight if she had to, but she walked faster, hoping Susan would give up and leave them alone before it was time to go in.

Susan went down with a thump against the ground. “Shit,” she said. “You can’t see tree roots either.” She seemed to know she was talking mostly to herself.

Robby’s arm brushed Leslie’s again. Neither one of them answered Susan.

“I think I twisted my ankle. You can have the stupid woods to yourselves.”

At first, all Leslie and Robby did was keep walking. Leslie started to think he hadn’t meant to be alone with her, but then his arm would brush hers again. The only noises were bugs and frogs and, in the distance, cars.

“I’ve got something to show you,” Robby said, and he slipped his hand into Leslie’s. Then he tugged, and they started running deeper into the woods, twigs breaking underfoot, low-hanging branches scraping their arms and faces. Leslie didn’t mind the scratches with Robby’s hot hand pulsing in her own. This was what she’d been waiting for. She imagined getting to whatever spot he was dragging them to and what his body would feel like pressing against hers.

Her lips felt cracked and dry all of a sudden, and her tongue too thick in her mouth. What if she didn’t know what to do when he kissed her? Where to put her tongue, her hands? She’d only had one other kiss, and that had been in fast motion under mistletoe in the back of her fifth grade classroom, three years ago now. The rest of the class, except for one or two struggling with their coats, had already gone outside for recess. The exchange had been damp and awkward. She’d left embarrassed, but with her heartbeat pounding in her ears. Running now made her heart beat louder and faster, too, made her breath come short.

Robby jerked them to a stop deep in the woods at a cluster of vines and branches. There was something tidy about the inside of the thicket, as if someone spent a lot of time there. Hanging down from the opening was a string and a rag swaying in the middle of the air, a sort of declaration of territory. A creek flowed with a noise like wind chimes beyond a row of scrubby bushes behind them. The moon had just begun to rise, huge and brilliant, and the waving rag was so white it caught the light that filtered through the break in the trees above the water.

Robby made a low noise like a laugh. That was when Leslie recognized the rag as the missing kitten from Mrs. Foster’s backyard. She wanted to run, but Robby’s hand clamped her in place.

He stood sneering, as if he were waiting for the questions to dawn on her. Why would he do such a thing? Why would he show her? What would he do next? Sticky night air pressed in around them, hot.

Leslie’s phone beeped twice. Robby jumped at the quick, shrill noise. Leslie took the chance to yank her hand out of his. “My mom’ll kill me if I’m late.” She shrugged like she was sorry, then ran like hell toward home.

Leslie had been far enough into the woods that even running at top speed hadn’t gotten her back by eleven. “Where were you?” her mother asked. She had been waiting at the front door when Leslie clambered in.

Out of breath, Leslie squeezed inside and slammed and locked the door behind them. She sank to the floor there, staying clear in case anyone might peek into the windows from outside.

“You’re bleeding,” her mother said, reaching a hand toward Leslie’s face, crisscrossed with twig scratches. Outside in the wet heat, Leslie hadn’t felt the blood but the chill of the air conditioning made the ooze feel warm against her cooling flesh. She slapped her mother’s hand away. “Don’t touch me!”

Her mother looked like a stranger now. Hair frazzled, eyes hazy, always so tired here in their new life, with a job thirty minutes away she didn’t like, new worries over paying bills, the loud angry phone calls with Leslie’s dad. “What happened, Leslie? You’re shaking.” She could feel the power of her mother’s desire to help, the amount of effort it took to keep from reaching out to touch her again. “Why would you even ask?”

The world her mother was afraid of had nothing to do with the one that had already taken hold of Leslie. Still, she kept her back tight against the door, as if she were strong enough to keep it out. 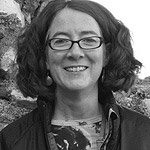