There is a saying that if you don’t know what you’re doing, ask your neighbors. Once upon a time when I first moved to Nelson County, Virginia, and knew no one, I experienced an untethered queasy feeling of not being entirely in my world. This unconnected-ness with my new surroundings produced an awful feeling of dis-location with self and was something I had not expected from my move to Virginia.  This unease persisted for weeks, months. 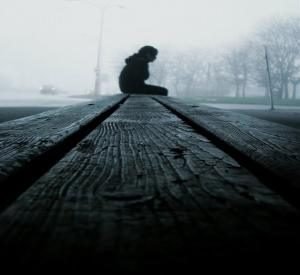 The first hint of relief occurred when I had to call on one of the farmer families in the neighborhood to help me move a large piece of furniture that would not fit into my house. I asked my neighbor to help me move it to the dilapidated schoolhouse on my property that I used for storage. The neighbor’s name was Carter (one of several Carter lines in Virginia) and one evening after mowing hay in his fields he showed up in his big flat-bed truck. He also arrived with his wife and their four grown kids to help lift my unwieldly bed with built-in shelves and cupboards. The Carter family heaved the huge bed onto the truck, carried it down the road and up the schoolhouse driveway. They hauled the monster bed off the truck, sweating, huffing and puffing, up the steep steps and into the schoolhouse. I asked Carter what I owed him.

Carter spit a wad of tobacco. “For what? We didn’ do nothin’.”

We stood there by the truck, night coming on, catching our breath and Carter’s wife, a woman with muscular thighs and dark short hair, launched into the story of her husband putting his boat into the river not far from where I lived. She said after her husband was out on the river a big storm blew up. She waited hours, but then it got dark, rain pouring, and still no sign of him. By this time, out of her mind, she called the only person she could think of to call, her son-in-law, who just happened to be the undertaker. “I called the undertaker!”

The wife’s story of her husband lost on the river and the panicked call to the undertaker became a thread, however thin, for me to hold on to. I was in a land where people told stories. People were living lives in these houses and farms and their narratives, became life-lines for me. The land began to shudder to life. Stories tethered me, reconnected me to myself and to a larger body, a community. 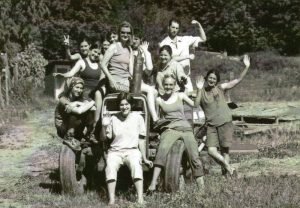 “Gossip is now considered by scientists as a way to learn about cultural norms, bond with others, promote cooperation, ” Julie Beck writes in “Gossip is Good and Useful.” (Atlantic Monthly).

The evolutionary psychologist Dunbar writes, “Gossip is what makes human society possible as we know it.”

My cleaning lady, Teresa tells me stories. She squeezes out the mop in the mudroom sink and tells me a story about her husband Daryl who had a stroke two years ago and can’t drive and is no longer able to work the heavy equipment that was his job. He sits watching television day in and day out in their mobile home up off Highway 56. Teresa tells me that over the weekend she just wanted to get Daryl out of the house and so, she says, I put Daryl in the truck and we go for a ride.  She said they had an argument about where Cub Creek began so decided to go up the mountain and see. They wound up the mountain and somewhere on a turn there in the middle of the road, Teresa says, was the biggest rattlesnake she’d ever seen.

“How could you tell it was a rattlesnake that far away,” I ask.

“Well we got out of the truck and go look at him. He’s got this big head and those pretty yellow patterns down his back and them rattles on his tail. I wasn’t going to kill him,” she says, “because he’s in his territory and not in my yard. Then a pickup pulls up behind our truck and a man jumps out and comes over to where we’re standing looking at the snake. This man has a stick and he lifts it up and whack, whack, whack, right down on that rattler’s neck. Kills it. Then picks the rattler up by the tail and throws it in the back of his pickup and says, “I’m taking you home for supper.”

Teresa says that Daryl turned to her and said, “Hon, I think we’ve gone too far up the mountain.”

The whole time Teresa’s telling her story she grips the mop, still in the bucket of Murphy’s Oil and soapy water. There was a time when I thought: how much am I paying this woman an hour to stop her work and tell me a story? Now I’ve decided. Not enough. I eagerly follow her through the rooms of my house, helping her make beds and folding towels as she regales me with stories and bits of gossip. 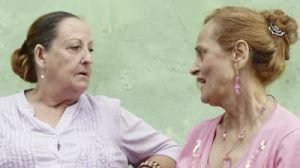 “A piece of gossip,” researchers write in a 2004 study in the Review of General Psychology, “is an opportunity to find out how someone did something right, or something wrong, and learn from the example. Learning how to live with others is something that continues throughout life. When a person chooses to share a story about someone else, it’s because they think that story is significant in some way. It might just be scandal or the thrill of some out-of-the-ordinary news. But as the study explains, “by hearing about the misadventures of others, we may not have to endure costs to ourselves, by making the same mistake.” 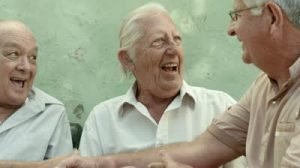 Teresa’s stories are for the most part about herself, her children and their circle. For example, she tells me that one Sunday her preacher announced he was launching an ancestry project where everyone was going to research their family tree. Teresa turned to the woman next to her in the choir and said, “he ain’t from this county and he don’t know he better watch out ‘cause a lot of them gonna find out they’re dog kin.”

A neighbor once referred to Teresa as the “town crier” and we both admitted Teresa was a fantastic storyteller, but also agreed that we too were at risk. For me, her stories are worth the price. I told this neighbor, “My life is an open book.”

If Teresa had been there, she may have asked, “How many books ya got?” 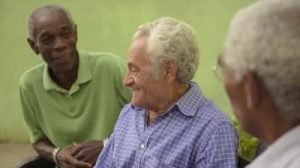