Last week it rained for three days. Outside my window the light pearled gray and rain drumming on the roof inspired me to ignore my to-do-list and wander among my bookshelves. My books have a way of wandering themselves as writers come and go and will sometimes carry a book to another room. Often when the writer returns the book, she will forget which room, which shelf.

So as the December gusts of rain blew across the river pastures, I decided to stroll among my book shelves. I did not care to re-shelve, organize or do inventory. I wanted to daydream through my books and re-acquaint myself with them and where they now live on my shelves.

When I see a book that I had forgotten about, there is a frisson of recognition. Oh, I’d forgotten about you and that time and place when you and I had been so intimate. As Azar Nafisi, the author of Reading Lolita in Tehran, said in an interview, “reading is the only place where we allow ourselves to be promiscuous.”

My eyes scan the shelves and light on Nabokov’s Pale Fire, a blurry sepia image on its cover. A novel that conjures up my turbulent twenties in Memphis when I sat on a porch with unpacked boxes in bright October mornings. Scarlet leaves, the bite of crisp air, and deep blue skies. I remember how happy I was having finally shed an unfaithful boyfriend, relieved to be on my own, losing myself in Pale Fire, in love with Nabokov’s ecstatic half-poem, half-prose novel and my new life. 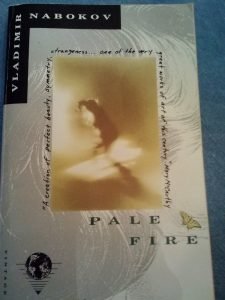 Moving on to the living room, and there on the bottom shelf, somewhat hidden, was The Art of War by Sun Tzu, a slim yellow paperback, one that I flipped through and sometimes wondered why I bought. Then I remembered: My son Charlie was working in a book and video store in Topanga Canyon. There he was behind the counter, recommending this movie or panning that one to the customers. I was proud of him and decided to buy a book. Interestingly enough, the owner of the store was a musician, had been a member of the eighties band, Tool, a band whom Charlie had loved when he was ten years old and whose CD he had played repeatedly until one day I decided to listen to the lyrics. So much darkness and anger! Musical brainwashing! When Charlie wasn’t looking I stole the offending CD and hid it under the lace tablecloths at the bottom of the china cabinet. Years later when Charlie began working at the store, he told his boss, the Tool band member that his mother had destroyed the band’s CD. The purchase of the Art of War that day? Something subconscious? Subliminal combat. Possibly. I had to laugh.

The rain slacked up a bit and I wondered if I should take my dog for a walk, but then I noticed Silk Roads, by Axel Madsen, “the Asian Adventures of Clara & Andre Malraux.” Oh, my God. This was the book that cast its spell over my husband and inspired our trip to Vietnam and Cambodia in 1993. I lifted the hardback book from the shelf, opened it and read the jacket cover: 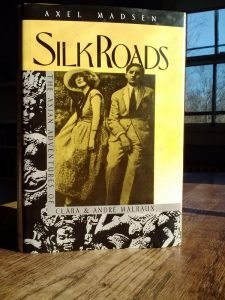 “In the Paris of 1923, Andre and Clara Malraux have the world at their feet. Married on a whim, they set about spending Clara’s considerable fortune in a whirl of carefree, Bohemian living, frequenting all the hot nightclubs and museums, travelling abroad, mingling with the Paris literati, and speculating in the feverish stock market. When the stock market caves in, however, Clara’s fortune evaporates, and they are suddenly destitute. But Clara and Andre are determined to live a life of adventure, so Andre hatches a bold plan: to go to French Indochina, find some forgotten Khmer temple, and “lift” a few relics to sell for a fortune in America. Their rather shady treasure hunt becomes a crusade when Clara and Andre are outraged by their government’s stifling of Asian culture. They start an anti-government newspaper in Saigon and defiantly expose the colonial injustice and corruption. This is a story of romance, crime, and political awakening.”

This was what my husband had in mind—to follow Andre and Clara Malrauxs’ journey! His dream was to make a film based on the Malraux’s adventures and he had drawn up our itinerary and secured our visas and tickets to Saigon in a serpentine way (the U.S. had not yet restored relations with Vietnam). We traveled from Saigon to Hanoi and then flew to Cambodia. I had never fully recognized the book’s influence as his muse. And now these many years later on a rainy December day, my sighting of Silk Roads, a book I had forgotten existed, sent me scurrying to the box of journals I keep under my bed. I wanted to find the journal I wrote while traveling through Cambodia and Vietnam and where I recorded that long mud-rutted drive in a battered Mercedes through the jungles not far away from the sounds of gunfire of the Khmer Rouge forces, to the ruins of Banteai Srey, the same temple where Andre and Clara stole a piece of temple relic.

My dog has to wait for her walk. It’s raining too hard.

One thought on “Rainy Day Odyessy”