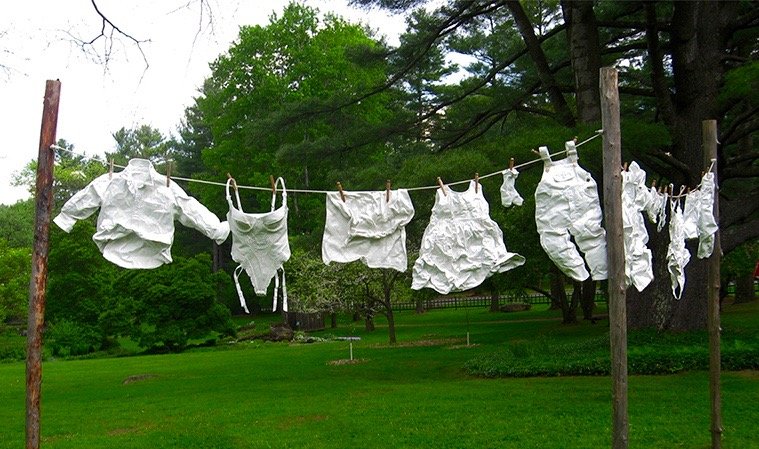 Whether cold or steamy, saintly or seductive, ghostly or shading the truth, the color white carries various intriguing implications. It symbolizes virginal virtue as well as the sizzle of summer.

“From the get go, white said everything to me. There is a romantic and youthful connotation associated with the ‘color’ white,” says Connecticut artist Suzanne Heilmann. “I think of babies being born, all new and pristine clean. Purity and innocence are represented in a conscious and simplistic way. White is cold too, and the whole death thing. I have to be very careful to give it balance so it won’t be a negative. Or sad.”

Heilmann, long a landscape painter and graphic designer, recently showed off her attraction to white’s sundry guises in In the Wind, an outdoor installation for the Berkshire Botanical Gardens in Stockbridge, Massachusetts. Her dozen dramatic white pieces –– water-proofed to withstand three months of weather — literally stopped traffic.

“I thought if I put up an installation that had clothes on it, it was just going to look like a clothing line,” says Heilmann, noting that she wanted the work to reflect family and also be balanced in size and weight so it didn’t look like sheets flattened in air.

“Since white can be daunting or sad, I wondered about naming it ‘Memorialized in White,’ due to its connotation of death. I kept the name because so many were old things or ones that belonged to somebody else who is no longer with us.

“Because the show was all white, people were stopping on the side of the road laughing and honking their horns when I put it up. If it had been in color, I don’t think the installation would have had the ‘pow’ factor that it created.”

Contributing to the “pow factor” was a vintage Merry Widow, “bustier,” a garment particularly difficult to turn to three-dimensional effect. “I thought this is going to be really tricky because the fabric is so fine. How can I make it look like someone is actually in it?’ It was in an earlier show and all the guys made a b-line for that one.”

Heilmann’s inspiration for her “memorialized” series began several years earlier. “The whole idea started with spring cleaning, going through drawers and getting rid of stuff,” she says. “I came across a child’s dress and a couple other heirlooms including the baptismal dress all five of us kids were baptized in. It felt a shame to lose these keepsakes, they were so beautiful. Some were a little torn but I thought it would be really cool to hang them up on the wall to look at instead of having them in a drawer. You can’t part with something, but what are you going to do with it? Turn it into something and make it a conversation piece.”

Heilmann started with a series of five pieces, transforming clothes she owned or was given. “The very first dress was one I became attached to and still have. It almost turned out a little ghostly. I’d been experimenting with paints. The color got romantic, and an old feel to it. Somebody walked into the gallery, saw the dress and said, ‘That’s almost spooky.’ Other love it. It talks to people in different ways.”

An 1800s camisole that had belonged to a Danish family friend seemed delicate beyond repair. “Working on that piece has been quite tricky; the fabric is so old it’s almost like dealing with paper.”

It was easier — and perhaps more fun — eternalizing a familiar pair of jeans. “They were my ex boy-friend’s jeans with holes in the knees and all that.” She laughs. “Everything comes with a story, a reminder of something that happened to these people in their younger days.” A woman in the music business bought the jeans, reminded of meeting Keith Richards of The Rolling Stones and marveling at how his too tight jeans barely allowed him to sit without crushing the cigarettes in his back pocket.

A woman in her 70s contacted Heilmann to preserve a red velvet dress she’d worn for a childhood portrait. “She had kept this dress for almost 60 years. She said, ‘I want you to memorialize this dress.’ I kept saying ‘Are you sure you want to do this?’ ‘Oh yes!” She’s the quintessential socialite. She was having some grand party and had to have the dress for a deadline.

“I’d never done anything but white pieces. It depends so much on the fabric as to how the pieces are going to end up. I was afraid it was going to look like a drowned cat. It didn’t but it sucked up the paint like you wouldn’t believe.”

Attaining Heilmann’s final, cast-like results is a lengthy, handcrafted challenge. “People think I take the garment, dip it into paint and then just hang it up, but it’s a laborious process — spraying and gluing to get the folds to stiffen and stay in place. I do it layer by layer and each piece probably has five layers or more of paint. If you just painted on top of the fabric, the whole thing would sink and nothing would be there.” She flip flops the process from front to back before tackling the inside. All pieces are designed to be hung on a wall or suspended from the ceiling.

Describing herself as a “texturalist,” Heilmann is drawn to many variables and materials, not always fabrics and not always white. She’s equally fascinated with light, space and depth techniques and often incorporates “found” objects into her work, melding the traditional with the diverse.

Her 2014 show, Mixed Media Textualism, showcased Heilmann’s creative diversity — multicolored bottle caps wired into a quilt to white collages of wood, paper, string and pasta. She continues to marry the old with the new through three-dimensional layers, harmoniously playing with shadows, depth and colors. She interplays elements including wood, metal, plastic, paper/board and organic objects. By using recycled collected objects, Heilmann aims to “deconstruct to reconstruct” her modern sculptured pieces.

“Combining different materials, can create shadow treatments, colors and textures, ultimately changing the character of the art piece through light effects,” she says. “In all mediums, layers of paint, paper, fabric, copper, metal or wood have been built up to create as much texture as possible, within the medium.

“I think I’m a frustrated engineer. I want to know how to construct and build certain things on a three-dimensional scale. It takes me a long time to figure out how I’m going to put these things together. I have to work backwards to create the final results I want.”

Two of Heilmann’s interesting “sculptures” in white show the influence of Louise Nevelson, an artist known for her mono-chromatic, monumental, wooden wall pieces and outdoor sculptures. “I think her work is so cool,” she says. “In White Squares and Ribbon Candy, the squares and paper transform, casting different shadows with the light source.

“I’m fascinated with white. It’s uniform and you get to see the shadows and textures it produces.”

“In my painting days, it was Picasso, and loose landscape scenes. I went through my Monet time as well. Cezanne was one of my favorites when I was growing up.”

Born in South Africa, Heilmann traveled extensively and came to the U.S. with her family in 1968. She attended the Maryland Institute of Art, and was graduated from the Fine arts Program at American University. She received a B.F.A. in Design from the School of Visual Arts in New York. At 27, she founded Heilmann Design, a New York firm specializing in packaging for U.S. and International corporations, among them The Distillers Somerset (importers of Johnnie Walker and Tanqueray) and USA Wine insiders, Colgate Palmolive, Estee Lauder and Newsweek. In 1987, she received a Clio award for wine packaging and label design.

Now living in Litchfield, Connecticut, Heilmann continues her package design business on a smaller scale while focusing on fine art. “My art background was developed through my packaging experience and helped me think on a three-dimentional level,” she says. “I created a lot of the illustrations that were on the packages, fulfilling my fine arts creativity.”

Heilmann’s varied work has been shown widely in Connecticut as well as at the Brand New Image Gallery in New York, and the Homestead in Hot Springs and Galerie La Parlier in Charlottesville, Virginia.

“I’m now thinking whether or not to add certain elements of color to my work. I’m still working on the baptismal dress — a labor of love — as well as a vintage sailor’s suit and a pair of shorts that have a little frog coming out of the pocket. I’m thinking ‘boys will be boys;’ they’re always sticking things and collecting rocks and stones.

“I’m going to start (introducing color) with this little pair of shorts. Maybe at the bottom, I’ll have a fadeout of a swamp or water or a mini landscape so people are drawn into seeing it.”

6 thoughts on “Many Shades of White: Suzanne Heilmann”