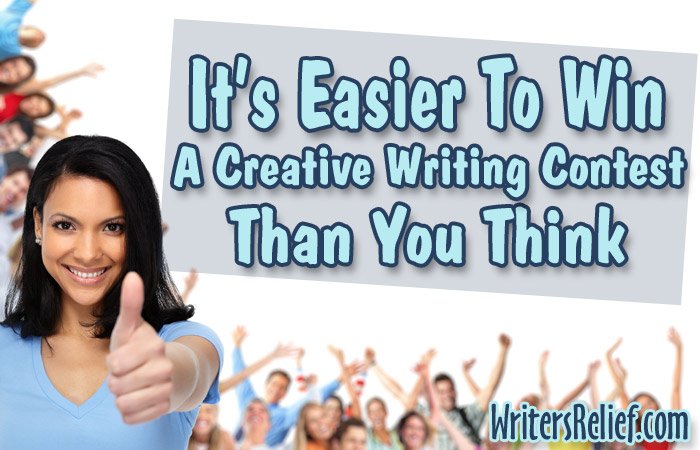 Many writers choose not to enter creative writing contests because they think the low odds of winning aren’t worth the effort. And yet, that’s exactly the kind of thinking that makes it easy for other people to enter writing contests and actually win them!

If You Think It’s Too Hard To Win A Writing Contest, Consider This:

There are a lot of really small contests out there. Often, individual writing groups will host their own small contests. Since these contests aren’t big, they won’t be as well known—and therefore will attract fewer competitors. Consider joining a trade organization for your genre and then be on the lookout for contest news. Don’t underestimate the merits of entering a “small” contest. Literary agents and editors really do keep an eye out for winners! Plus, small contests often have fantastic judges, which is great for networking!

Some contests are “automatic.” A number of literary journals automatically enter all of their accepted works into their annual contest (with no entry fee). Talk about the easiest contest you’ll ever not officially enter—and possibly win!

It’s harder to research writing contests than other publishing leads. While anyone can pull up an online list of literary journals that accept short stories, finding contests that accept short stories is not as easy. Why? Because contest guidelines often change from year to year, leading to outdated information being posted all over the Internet—and leaving writers like you to sort out what’s accurate and what’s not. As a result, fewer writers are willing to put in the effort of researching writing contests. Instead, they stick with making literary journal submissions.

Entry fees put people off. Even though contest fees can be as low as a few dollars, many writers would rather go the “free” route of traditional lit mag submissions instead of paying to compete. So a lot of your would-be competitors will never move past the entry gate.

Fussy submission guidelines create friction. Each writing contest has its own requirements for cover letters, formatting, method of submission, etc. Therefore, writers can’t take a one-size-fits-all approach to making contest submissions. Many writers would rather send the exact same submission to five lit mags than prepare five individual submissions for five individual contests. This is another reason why contests often have a smaller pool of competitors.

Niche topics limit competition. Some contest judges read for very, very specific topics, such as a writer’s experiences with certain exotic foods—for example: the African horned cucumber. Since there are fewer writers with experience in the given topic, you’ll have less competition for first place.

Many writing contests restrict the demographics of writers who can enter. As with niche topics, some contests hold writers to specific standards (i.e., a contest for women writers who have lived at or above the Arctic circle). If you fit the profile for a very specific writing contest, enter—because your odds of winning a contest will definitely rise!

Do You Really Have A Shot At Winning A Writing Contest? Heck, Yeah!

Submitting to a writing contest requires a little extra effort (here are our tips for strategies that can help you win). But because authors who submit to writing contests compete against a smaller pool of writers, their odds of winning may be higher. In short, a little additional effort can go a long way toward enhancing your writing career.

This article has been reprinted with the permission of Writer’s Relief, a highly recommended author’s submission service. We assist writers with preparing their submissions and researching the best markets. We have a service for every budget, as well as a free e-publication for writers, Submit Write Now! Visit our site today to learn more.