I sighed as I loaded my duffle into the Trooper, reluctant to leave for a long weekend at the emergency veterinary hospital. It had been one of those perfect early spring days that, slanting now towards a soft peeper-filled dusk, had transported my mind to vanished places and long gone years. The sun, warm across my shoulders as I planted early peas, struck through the bare tree limbs onto flattened taupe grasses and crispy dead leaves. A light breeze replaced the savage winds of recent weeks and the air held that first clean hint of things coming back to life. Inch high points of emerging jonquils triggered the image of my young hands picking blooms one Easter on the orchard in the shadow of Tinker Mountain.

Today I had worked on outside chores: collecting kindling for the freezing nights still to come, spading the soft, damp soil of the garden and clearing leaves from the early bulbs. My memories had skipped back through the years. How many early spring days like this does a lifetime hold? Perhaps one or two a year? My very first memory is of such a day. I see the worn patio bricks behind the log cabin, no more than three feet below my line of sight and there, bordering the bricks, are purple crocuses in bright sunshine. I am two and a half. These are the days when I can still feel that nameless anticipation of youth. You don’t even know what you want, but it is surely out there in the future, waiting for you. Now, as I make my weekly trek into the city, I can’t quite clear the trance. At this moment, I would trade all of today’s wonderful definites for yesterday’s sweet dreams.

Soon, the demands of my weekend shift swept away all non-relevant musing. The weather remained balmy and business reflected the increased outdoor activity as people and pets emerged from the confinement of icy winter. Trauma is reduced in bad weather, but we had a steady flow that weekend of hit by cars and lacerations to supplement the usual illnesses. Early spring also brings more fight-related injuries as the breeding season intensifies. So I was not surprised to find a tomcat with an abscess waiting for me Saturday afternoon.

“Molly” was a handsome fellow in his prime. Lean and muscled with broad tabby stripes, he sported the pumpkin head of a mature tomcat. He was also tailless, his masculine equipment readily apparent as he strutted across the room. His owner, in slacks and Shetland sweater, pointed out the painful, swollen front foot. Against the wall, a clear distance from her mother stood a sullen twelve or thirteen year old girl. Arms folded across her skinny chest, pink short-shorts and flip-flops decorating long white colt-like legs, Jane kept her lips clamped tightly across braces when she remembered to. She met my eyes briefly before looking dismissively away, tipping her chin slightly higher as the edges of her mouth turned down. She was no one’s friend that day.

Fortunately, this child was not my problem. Molly was. Examining him, I found he had the expected fever and scabs across his fat paw. Grasping a dried clump of hair, I quickly plucked a crust off and was rewarded with malodorous green pus oozing from the puncture. I turned to my client and began to explain.

“The breeding season for cats is in full swing now and, since Molly is a tomcat, he has been out fighting for a lady. His foot was bitten and it’s become infected. We should be able to resolve it easily.”

Mother and daughter stared. “Pardon me?” said the lady.

I repeated, “Since it’s the breeding season for cats and Molly is a tomcat, he –“

The girl interrupted, “What did you say?”

Narrowing her eyes, she challenged, “How do you know?”

I turned to her mother and raised my eyebrows. This was not my job. Unfortunately, that lady just looked blank. Thinking that I couldn’t let this poor kid remain so woefully ignorant, I let the silence lengthen. When her mother helplessly shrugged, I decided the teenager was old enough to know.

So I met her defiant look and said, “Because he has testicles.”

Shocked, her eyes widened momentarily before her face contorted in disgust.

“Oh. Well. That’s. Just. Great.” She said bitterly. Apparently Molly and I, between us, had ruined her day.

Since I might as well be hung for a sheep as a lamb, I turned Molly around and pointed matter-of-factly, “They’re right here.” Peeking briefly through her red hair, she turned away again and mumbled, “I thought that was his butt.”

“No, that would be above. Here.” I gestured cheerfully.

Lesson over, I cleaned up Molly’s foot and dispensed antibiotics. As they left, Jane’s shoulders hunched as she ignored her mother. I mulled over the cryptic statement. Did she think her mother was an idiot? Were there too many testicles in the world already? Could she not believe she was having this embarrassing conversation with a stranger? I will never know. But I knew I had forgotten the pain of that age. Spring fever had blinded me. The dreams of youth are no more free than is the wisdom of later years. Perhaps I would not trade after all. 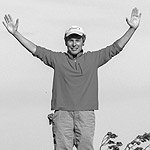 Dr. Douglass Hopkins is a small animal veterinarian practicing primarily emergency medicine in the Shenandoah Valley. When not working or enjoying choral singing, she can often be found outside with family, friends, children and dogs.
Follow us!