We Always Called Him Fletcher

Never by his first name Albert, or Mr. Fletcher.
He was tall as a sugar pine, skin the color

an extension ladder from job to job,
his back gospel-straight.

I knew nothing beyond
his easy manner, and that one

where out back he managed to unfold
from a lean-to, tools in tow.

There were easy lies about Fletcher.
His thank-you-mam gratitude for a bologna sandwich

served on our back porch stoop, water
from the spigot. Small wad of bills

a gracious plenty for a day’s work. Even
my mother’s word to name him was twisted.

Negra. The way she’d let the long O slide
between proper and implication. Nobody spoke

of the little shed or the cot I saw tucked
in a corner, instead, let me imagine

it was a resting place after a long
walk from his home, an early breakfast

of eggs and grits and bacon with the kids
who’d be watching cartoons before camp,

a wife getting dressed to do what women do —
church circle or bridge at the country club.

1.
At first you wished him nightmares,
gut-churning, wake-in-the-middle-of-the-night
nightmares. Or the come-true versions:
his beach house splintered, sandbags lapping up
foam like some hungry whore,
his family uprooted
to the second or third row
where tourists rent by the week,
drink domestic beer.

2.
Do you think it’s befitting to scorn
the one whose heels are dug deep
in pluff mud ‘til there’s no more sand to pump?
Whose name was blazed by a father
between cottage and surf? You don’t wish his dogs
dashed against dunes or seagulls adrift
without porch rails.
You always loved the gulls
your dogs would chase at water’s edge.

3.
And what if you had had a dad
who could spot a dolphin
half-way to Spain, you on a porch swing
in the old man’s lap, sun
setting on a flat shimmer of salt, he
teaching you each summer about
riptides and undertows and how to pee
in the tidal pools. Maybe the two of you
each August would crawl on hands and knees
digging for sharks’ teeth —
black, prehistoric endowments
you’d pack in a cigar box,
stow deep in the attic, forever. 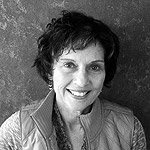 Barbara Conrad is author of Wild Plums, (FutureCycle Press, 2013) and The Gravity of Color, (Main Street Rag, 2007) and editor of Waiting for Soup, a collection of art and poetry from her weekly workshops with homeless folks. Her poems have appeared in numerous journals and anthologies, and three were recent finalists for the 2015 NC Literary Review, James Applewhite Prize. Her writings focus on personal journey, nature and social justice issues.