The Sheets Pulled Over

When one thinks in love about love,
he’s doing what he shouldn’t. He will get it wrong.

What if everything were revealed?
The apples and milk on your mind

when we lay down in Washington Park
in the busy green city, if those were

left on the bus in Flatbush, had tumbled
to the gummed up floor since, and were

what occupied you as we rushed
back to your bedroom, gripped with heat.

When we come to love we come expecting
to get some part of it exactly right.

What if it were that we missed the point,
and through the forest of limbs, smell of apples

failed to see that love is the sheets pulled over
as much as any of the underneath.

After our there was no I
to repeat in two china white
bodies meeting one another.
As infants rapt with a mirror
we came together to reflect
the body in motion, the only
way that either of us could ever
become the body, dissolving
one into the other, each
becoming all.

Your foot, remember, kicked
the bowl off my nightstand,
and when it fell to the floor
I felt as if not only the white porcelain
had shattered. You followed
its arc despite everything, your
gaze breaking from mine, and we
pulled back, hearing a skitter
and a rinse of dust. Sitting and
staring at you in that broken
moment as though I had
no eye to turn away from. 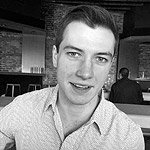 Originally from Macon, Georgia, Tanner is currently an undergraduate at the University of Virginia. His work has appeared or is forthcoming in the San Pedro River Review, American Chordata, and Midway Journal.