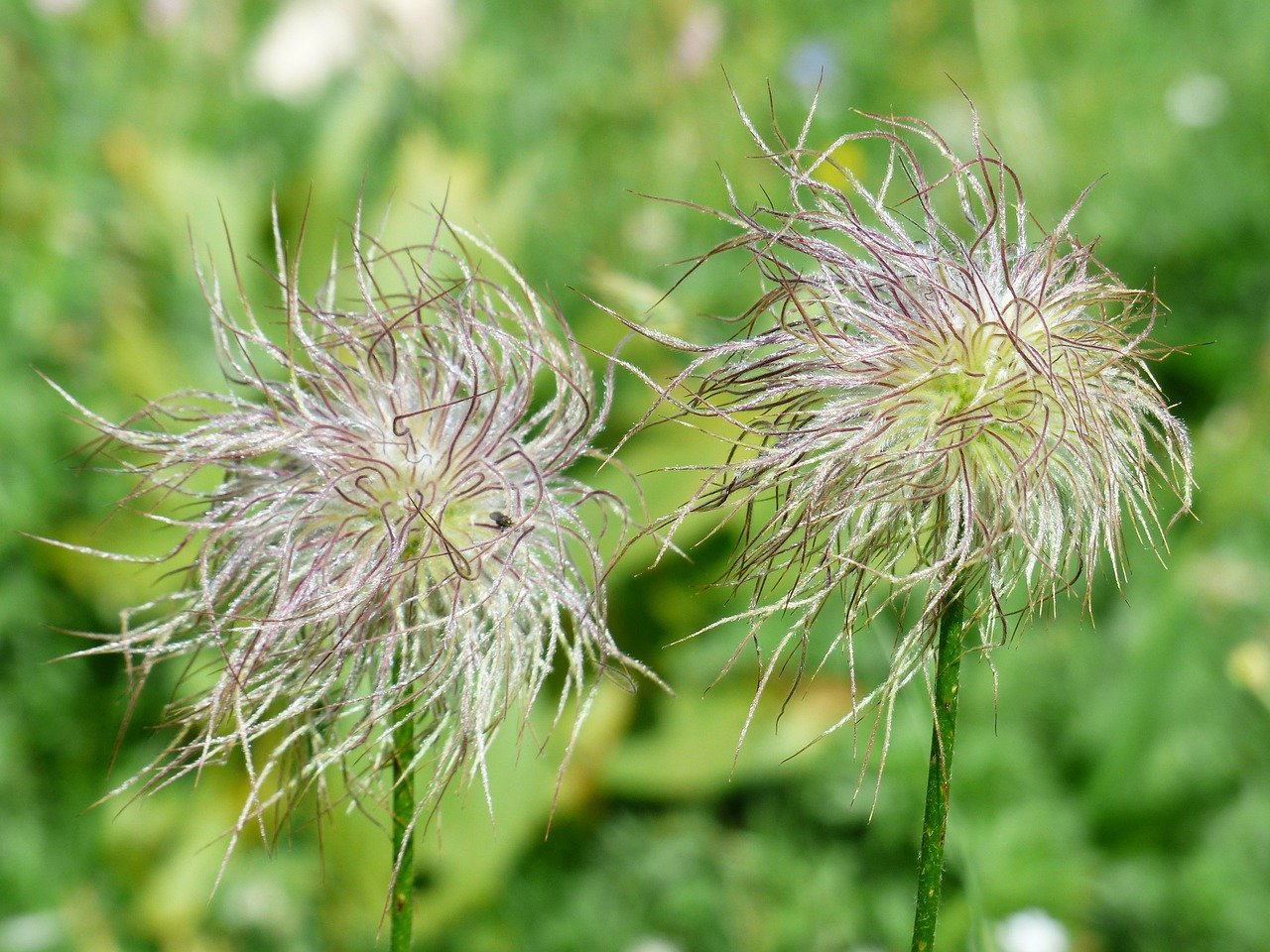 When the sun catches it right, Lena knows her hair resembles strawberry cotton candy. It trembles on the slightest of breezes, struggles to lift, never dissuaded by the obstinacy of follicles for long. It’s persisted like this for years. Lena’s mother sits on the bleacher just one ahead with her bald spot camouflaged by product and effort. Mom’s scalp supports not one, but two devices designed to lend the appearance of body and fullness. The first—a standard thickener from a squat, purple jar. The second is turf—plastic fibers in a spray. It’s not too dissimilar from the field on which Timmy just swung and missed. Strrrike! Lena has long decided to shave her head when her turn comes. Their hair eventually defies all the Nolan women and leaves.

“Timmy!” Erica yells and jumps up and down next to Lena. Timmy’s sister is no more than four feet tall and hasn’t sat down the whole game. Her hair—the fluffy strawberry and cream of her mother’s—blows in the breeze. “Timmy!” she screeches and coughs.

Another pitch and another whiff. Erica pouts and sits down. Her bottom disagrees and continues to bounce. Lena recalls an image of her husband, a still effigy covered not in pigeon shit but a baby’s. How she loved him when he finally let go of the rectal thermometer that day and began to giggle and mop Erica’s explosion up with a diaper, just making the disaster worse, pushing the diarrhea into the cracks in the weathered window frame next to the crib and between the chips in the paint job over the cast iron radiator. She ignored the sticky baby poo, the smell of chemical warfare, and embraced him. Lena thinks of that day on an as-needed basis.

Steve—Coach Rogers—sits on the team bench. Lena can see his lips, pursed over the two chins and under the pate whose hair has already fled. God, Erica’s got no prayer, Lena sighs. Steve’s hands rest clasped over a belly round as a party ball of Coors. 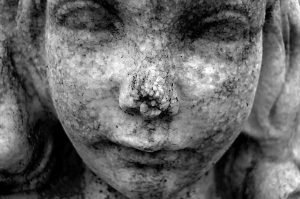 Strrrike! There will need to be ice cream after dinner tonight. A no hitter. Butter pecan, Lena decides, Timmy’s favorite. Steve has never raised a hand to her, has never hit her. The drink makes him melancholy. He is a good man, she tells her mother as often as possible. He is a good man.

Timmy walks up the bleachers and sits heavily, his chin rests in both hands and his fingertips rub his brows absently. Erica approaches, purses her lips and pauses. Lena knows her daughter will hug her brother and tonight will weep for the injustice of defeat on his behalf. Vanilla ice cream and Hershey syrup, notes Lena, Erica’s favorite. And a fifth of E&J for Steve.

Tim lives too far away to expect him for dinner. He is close enough to call and ask his mother to pick him up from jail again. He is no longer drunk when she faces him. His face remains turned. A slim five-six and a hundred and forty pounds—a classic wrestler’s body like his father’s once was.

“I brought your bag,” Lena mutters as she pulls out of the shade of the parking lot and into the harsh pre-dusk glare. “You did a good job cleaning out your place.” She keeps her eyes on the asphalt, the cracks in the pavement mark their progress. For years she’s prayed one would open and swallow the car. Swallow her. Coward, she chastises herself behind her eyes. Coward. She cannot say it out loud.

Tim sits, his frozen eyes fixed on a point ahead. Lena doesn’t know if he’s counting the cracks too. He nods. “Thanks, Mom,” he says and clears his throat. They say nothing more until the minivan crests the last hill.

In the distance, airplanes jockey for position with the grace of whales in shallow water. “I have your boarding passes,” Lena says, her voice now clear. “I checked the weather in Fort Benning. Seventy and sunny.” She tries to smile. In Indianapolis, there’s snow in tomorrow’s forecast. All too soon, there is the sign — Delta, it states in block letters.

Tim reaches back, pulls the duffel over the backrest and hugs it to his chest.

“Does he know?” he asks. “Mom?” Tim prompts when no answer comes.

“There is some stationery and stamps in the bag.” She looks up at her son. His eyes glisten. “I’ll send a message,” Lena relents. She doesn’t know why it’s her job to keep her ex-husband informed. She has earned the right to forget. To attempt to forget. She has allowed for a precedent, though; now what’s done is done.

“In uniform?” Lena smiles now without reservation. “When has my son become such a stud?” Her face smoothes over. “Always remember, basic training is just nine weeks. It’ll be over before you know it.”

“Okay, Mom,” Tim exhales. “Take care of yourself.” He stumbles out, his duffel held tight, and walks into the terminal. He does not look back.

There was a time when the house felt small. A family of four and a dog filled up the three bedrooms. First cozily. Then tightly. When nightly booze moved in and the home threatened to burst, Lena spoke up. That’s when Steve did not hit her for the first time. His right hook stopped a quarter-inch from her eye; his snarl continued beyond.

Lena pulls into her driveway as darkness falls. The garage is too full. She expects Rex to sidle up wagging his tail, then remembers that final vet visit. A tumor. Right, that was a year ago. She peeks in the fridge. The lettuce in the spinner hasn’t turned yet. She makes a salad with a boiled egg and garnishes it with scallions. Balsamic vinaigrette. The bottle of brandy beckons from the counter.

Brandy in hand, Lena opens the garage door and steps down. Several cardboard boxes rest where by natural order her car ought to be. She’d sealed and labeled them. Sheets of paper listing the contents hang off the sides affixed with tape.

“Alcohol a factor in crash with fatality – child dead, driver in serious condition,” read the headline on the third page, buried among stories about a new football stadium and an explosion at a meth lab. Circuit City’s going-out-of-business sale: everything must go. They all got the same font, the same black ink on porous white pulp. All news.

When Lena got the call, no tears came. She went upstairs and drew a bath. She found one of Steve’s razors and took the blade out. The water was as hot as she could bear, the red line on her skin tracing the steaming meniscus. Pale freckles above, a pink like a baby’s scalp under the surface. Lena descended until only the reed of her nose rose above the water. Drowning was not the plan. She grasped the blade. She tried to grasp the blade. It slipped out of her hand and sank slowly toward the bottom like a steampunk autumn leaf.

Lena pushed away with her feet and a tsunami sloshed over the bathroom tiles. She swatted at the sharp, missed—betrayed by the perspective—but gained enough purchase on the blade’s edges as it skimmed the tub’s enamel. Her finger opened, blood leaked freely—had there been sharks, she imagined they would now begin to swarm. Such a little cut and so much red. 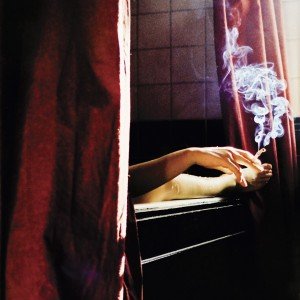 “Mom!” came a whine from beyond the locked door. Timmy. Lena let the blade fall and lifted the plug. She felt her body convulse, shivers rocked her, she screamed with no intent, screamed because that was the only thing to do. The water had gotten cool when all she had left were sobs. Timmy had stopped yelling and rapping on the door, she’d heard him rest his back against it. The hollow-core board shivered.

The tape sealing the boxes has discolored. The paper tags were once white; they are now butterscotch. Lena needs no knife to rip the first open. She empties it out, plastic bag by plastic bag, she rips them and buries her face in Erica’s spring blouses, summer dresses. A sweater with a reindeer on it. A red nose. A blanket sings pink, its ruffled edges merrily frayed. Lena bundles it up. She crushes it to her chest. She breathes in deeply, infusing her lungs with the memory she’s sealed away. Eight years. The air is oxygen, nitrogen and Erica.

Lena scales the stairs and draws a bath. As hot as she can stand. 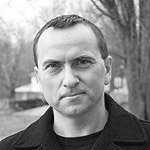 Karol Lagodzki left Poland in his late teens and has called the United States home for over two decades. His fascination with the “why” of human behavior led him to study sociology and psychology. He’s a self-taught inventor and has several mechanical and electronic patents. In his writing, he draws heavily on personal experiences and training. He has recently finished a novel about an errant prophet set in ancient Canaan, Anatolia and Egypt, and is at work on a book about the human genome project taken a step too far. You can follow him at www.klagodzki.com.
Follow us!

2 thoughts on “A Bald Spot by Karol Lagodzki”