I’ve kept an idea journal for as long as I can remember. Whenever a word, sentence or story idea strikes my fancy, I jot it down and date the entry.

One day, I thumbed through the pages, noticing dates on entries. A pattern emerged. Whenever I felt at peace with my life, I saw numerous entries, many of which inspired stories and essays.

However, the number of entries decreased to almost none when I was experiencing turmoil. One year stood out. I was stuck in a conflict with a person who had no interest in resolution. I felt hurt and angry. A tape ran through my mind reviewing how I was wronged, what I should have said, what should happen to make things right… ad nauseam. This tape consumed me, leaving no space to think. My creativity was being held hostage by my refusal to forgive and let go.

During that period, I subscribed to a phone app that delivered a new word each day. One day my screen displayed the word dharna—the practice of exacting justice by sitting and fasting at the doorstep of an offender until death, or until the demand is granted. I’m assuming that means after someone hurts you, you plant yourself on his doorstep just waiting for an apology and recompense. You stay until the person makes amends or until you die. The definition didn’t specify who does the dying. Either way, if no apology is forthcoming, you lose. Either you die and never receive the apology, or the offender dies and you don’t receive an apology.

I realized that by clinging to my grievances and waiting for an apology, I was sitting by the door, starving, dying and not doing what I’m meant to do, which is write. I understood that I needed to forgive regardless of whether that person ever acknowledged any culpability. The writer Anne Lamott, says, “Not forgiving is like drinking rat poison and expecting the rat to die.” Therefore, forgiving was in my self-interest; I needed to be free and whole again.

Sometimes, you have to choose to forgive then wait for your heart to catch up with your head and your actions. Corrie Ten Boom, a woman who was imprisoned by the Nazis, says, “Forgiveness is an act of will, and the will can function regardless of the temperature of the heart.”

For me, forgiveness involved changing the tape that was running in my head; that meant reading, praying, getting counsel and setting good boundaries. Thomas Szasz says, “The stupid neither forgive nor forget; the naïve forgive and forget; the wise forgive but do not forget.” So, you forgive, but you don’t allow the person to continue to harm you.

I relapse frequently. How do I respond? I try to remember not to drink the poison.

How do you know you’ve forgiven someone? You stop wanting to retaliate. You are at peace with them and your mind is free to take up other tasks, such as resuming a creative, productive life. 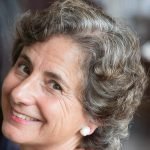 Author of Fatty in the Back Seat, Deborah M. Prum has won nine awards for her fiction, which has appeared in The Virginia Quarterly Review, Across the Margin and other publications. Her audio book, First Kiss and Other Cautionary Tales, is a collection of essays, which have aired on NPR-member stations and have appeared in The Washington Post and other publications. She’s written for Writer Magazine, The Writer’s Handbook, and the Society of Children’s Book Writers & Illustrators Magazine. More of her work can be found at www.deborahprum.com