How many years must she hear it? Mother Mother Mother. How many years already? The lips are those of a luminous fish suspended in water when it ceases to swim back and forth. A fish that hangs in eerie silence, mouth dropping open and then locking upward as it takes in water before pumping it back through the gills. Breathing.

Once, as a child, she visited the aquarium at Belle Isle. Nina held her hand as they moved slowly through the large gallery beneath an arched ceiling of sea-green glass tiles. From one walled tank to another, each lit from within, one framed neon scene to the next, their girlish faces were illuminated by these poor fish. She was sure the rhythmic dropping mouths were supplications. “They’re saying something,” she tugged Nina’s sleeve. “No, that’s how they breathe,” Nina said.

What became of Nina, the older girl as unknowable as the electric glowing fish? Nina, long-faced with dark eyes, black hair, and brittle, exotic parents. Nina, last of the line. Did they fail her? The girl her brother had loved so fervently that his face turned crimson at the mention of her name; they had both loved Nina, jealously fought for her favor and when she moved away, they fought on, if only for the memory of her. “I went to Belle Isle with her,” the sister said. “Yes, but I was invited to see her father conduct at Orchestra Hall,” the brother answered, cheeks burning.

Where were they now? This brother and Nina. Where was that old copy of Huckleberry Finn they stole from one another, back and forth, after Nina had gone?

Then a deeper voice joins in.

A second set of lips appears, peppery stubble above and below. Small, wiry hairs protrude from the nose. Do they think I enjoy looking up their nostrils? Go away. Now there are two mouths, side by side. How did these two fish escape and push her down into a tank where she cannot breathe. Why do they torment her from the dry side of water and heavy glass, mouths moving, voices muted? They demand wakefulness in the now. They tilt their heads, confer in glances. Do they think she cannot see this? They whisper, then try again.

“Caroline.” Out of the deeps, she hears herself, barely recognizable, banging the glass, battling back. How did her voice, her lungs, come so near to drowning?

“Care-oh-line.” Speaking, punching each stump of the word. A boxer. Angry. Gasping for syllables.

But pushing from here, flat on her back, exhausts her. Already the chest and throat are surrendering. The two sets of lips draw back, bringing whole faces into view. Puzzled expressions. That man, the one with nose hairs who keeps swimming back to her, seems to live here, is thinking now and trying to remember something.

“Uncle Jack? Her brother?” says the other voice. The young woman.

“Must be,” the deeper voice replies. “This has come up before. She seems to think Jack is still alive. But Nina. I have no idea who this might be.”

She listens intently as the man—his name is gone—confers with the daughter. Pam. No, not Pam. The other one. What does it matter? Nobody remembers Nina.

The daughter leans close again, reaches through water to stroke her mother’s forehead.

“You want us to call you Caroline?”

“Yes, and bring Jack. Bring him,” she commands.

Let her wrestle with Jack, laugh and fight over Nina. Do it all again. Swim fearlessly to find her friend on summer hot sand. Turn cartwheels for her. Nina said, “You have springs for legs!”

But now the daughter begins to cry, turns away and leaves the bedroom. The husband goes after the daughter, calling her back. It’s not their fault.

No, it’s not their fault, but if she must stay here, she wants a ceiling of sea-green tiles. The company of fish. Her brother. A dark-eyed friend from long ago when life was a future. Someone who knew her then.

Belle Isle Aquarium is a work of fiction prompted by the little known life, and Detroit childhood, of Nina Clemens Gabrilowitsch. Born in 1910, Nina was the only child of Clara Clemens Gabrilowitsch and Ossip Gabrilowitsch. Clara was the second daughter of Samuel Clemens (Mark Twain). Ossip was the conductor of the Detroit Symphony Orchestra from 1918 to 1936. In 1929, Nina left Detroit to study at Barnard College. She died in Los Angeles on January 16, 1966. 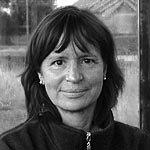 Amy Kenyon is a historian and writer-photographer. She is the author of Dreaming Suburbia, a study of Detroit and postwar sub-urbanization (Wayne State University Press) and a first novel, Ford Road (University of Michigan Press). As a writer of fiction and nonfiction, she has published with Great Lakes Review, Salon, Belt Magazine, Bright Lights Film Journal, Eclectica Magazine, Cobalt Review, and The Detroit News. She is also a regular blogger for Huffington Post UK. Born and raised in Michigan, Amy now lives in London.