Her car was still sprinkled with debris from her recent move to the city. A misshapen yoga mat, tea towels, her boyfriend’s guitar pedals, a bedside lamp; the persisting clutter of merging lives. Wishing she’d taken off her cardigan, she baked in the afternoon sun. The air-conditioner was broken, pushing a current of hot air around the interior, and making the berry-scented freshener tap softly against the windscreen in the artificial breeze.

Checking her mirrors, she signaled to change lanes. She always felt better—more insulated—driving in the middle lane in the city. The traffic was dense, the lanes packed with cars, each catching and throwing slivers of sunlight. Pulling her sunglasses up to sit atop her unwashed hair, she entered the dim light of the Burnley Tunnel.

A silver Audi S5 pulled out and came alongside her in the next lane. Glancing to her right she saw the driver was mouthing something at her. She noticed a long horizontal scratch marring the silver panels. Perhaps he was trying to warn her, to tell her of a broken taillight or some other car trouble. Hastily, she wound down her window only to hear the aggressive tones of a middle-aged man. His shouts were overpowered by the sound of truck horns and traffic exhausts, but his rage was unmistakably loud. He was torn between looking at the road, and giving her the finger, his arm stretched across the passenger toward her.

She concentrated on the road, frantically trying to recall what she might have done to upset him. Had she braked too suddenly? Cut him off in changing lanes earlier? She tried to ignore him, afraid to take her eyes off the road. She could feel the choppy waves of his anger seeping into her car and felt her own surge of emotion in response. The tunnel seemed to stretch out in never-ending lines of traffic and she felt isolated among all the trucks and cars.

Two more blocks and she would be free of the unforgiving traffic. She merged into the left lane for the Burnley St Exit and tried to stay calm as the offending car followed. Perhaps he lived in the area, she thought, her eyes glued to her rear-vision mirror, no need to panic. Three more streets, one more turn, nearly there. He tailgated her all the way to her street. Pulling into the front of her apartment building, her mouth went numb as he swung in behind her. Locking herself in, she rummaged for her phone amidst the rubble in her handbag.

The man slammed his car door and marched to her driver’s side window, rapping his knuckles obnoxiously on the glass. Clutching her phone, finger poised to dial for emergency, she looked up at him. His mouth was encased in a jowly jaw that wobbled as he yelled at her to wind down the window. His greying hair was cut short and sprouted up from his forehead in little indignant spikes. A vein protruded from his left temple. She noticed there was a stain on his tie and saw his eyes were a watery brown with dark flecks, like strong tea with the leaves still in, against his milky bloodshot whites. She cracked the window open and tried to speak but went unheard in a tide of insults.

“Where did you learn to drive? Stupid bitch. What is the fucking matter with you anyway?”

She was afraid of him, he was bigger and louder and ruder than she. But by then she was angry too. A deep anger that swelled in her bones against years of systematic quieting. He had asked her some nasty question and was condescendingly waiting for her to answer, but she was no longer listening. Unclicking her seatbelt, she opened the car door. Hard. It connected with his nose in a spectacular crunch and an eruption of blood. He swore violently as blood gushed into his cupped hands.

Her heart hurled itself against her ribcage in fright. She retreated, unsure whether to put faith in the relative safety of the lockable car, or venture out and help the human fountain of blood flailing by the door. She opted for a compromise and meekly offered a clutch of tissues through the half open window; he snatched at them and wadded them against his nose.

His rage had momentarily been upstaged by the throbbing pain: it returned with a vengeance. He spat a thick glob of blood onto the glass of her window, called her a bitch again, and stomped back to his car. She held her breath as he started his car and proceeded to reverse into the rubbish bins at the curb before screeching back towards the main road.

After several minutes, she felt steady enough to leave the car. She collected her handbag and shuffled to her apartment, fumbling the house keys into the lock. Inside, she let go a deflated sigh and leaned against the door frame. It seemed as though all her joints had forgotten how to hold her bones together.

When her limbs recovered, she busied herself with refilling the kettle. She stirred the milk and sugar, extracted the teabag, and tried not to recall his face with its mouthful of blood and bile. In her unsteady hand, the cup quivered and sloshed its hot cargo onto the carpet as she shuffled to the living room.

Kicking off her shoes, she wondered if she would still see his likeness in cars that passed her on the toll-way in five years’ time. Maybe in her dreams she’d be frozen in the driver’s seat while cars with bloody windscreens drove in circles around her. She sipped her tea and hoped that his nose was broken. She wished he’d have to wear one of those ridiculous plaster casts, that it would be set askew. Let its crookedness be a reminder of her. 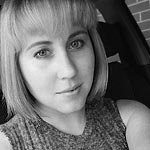 Lori Franklin is at University studying Literature and Creative Writing. She lives in Melbourne with her boyfriend, after spending two years living abroad and traveling. She is a lover of literature and film, and is enthusiastic about food, feminism and cats.