My friend always wanted to see the mountain
with its eternal snow, but she never
crossed the ocean to Japan. Instead,
she bought a small reproduction
of Hokusai’s “Boy Viewing Mount Fuji”
and hung it on her bedroom wall.
Every morning it greets the daylight:
the boy with his back to her
as he faces the mountain and plays a flute,
his body perfectly balanced on a thick
tree branch that seems to slice
Fuji’s heart with a rugged abandon.
“In another life,” she vows, “I’ll come back
as that flute, the hollow reed content
to be held and hidden in the boy’s hands.”

always leave things behind:
gaudy topaz ring of a mother,
silent harmonica of a father,
a favorite uncle’s shot glass,
a forgotten aunt’s bone china.
The list spirals into a litany of
convoluted loss, so it’s really
no surprise when her husband
brings her “a surprise gift.”
The stained fragment of a small
animal’s spine that he found
near the maple tree. Eight perfect
vertebrae aligned like train cars
or a Lego toy her son lost
in the backyard. She remembers
a story overheard at a funeral
in Lansing. How a philosophy
professor stole a thigh bone
from an archeological dig
in Peru, something a young
Inca girl left behind just for him
to find. At least that’s what
his ego whispers in his ear.
But what of the “almost dead,”
what do they leave? The three
girls locked in a house in Cleveland
by a bus driver. Ten years later
and they’re women who finally
escape; they leave nothing.
Fill their bodies with nose studs,
eyebrow rings, stark red and green
tattoos of roses and thorns.
And that arrogant academic
who used the girl’s femur for
a paperweight? He died, too.
The unpublished manuscript
of his life’s work on Nietzsche
collecting dust in a cousin’s attic. 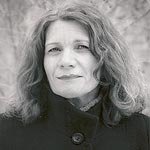 Linda Nemec Foster is the author of nine collections of poetry including Amber Necklace from Gdansk (LSU Press) and Talking Diamonds (New Issues Press). Her work has been published in numerous magazines and journals such as The Georgia Review, Nimrod, Quarterly West, Witness, New American Writing, and North American Review. She has received nominations for the Pushcart Prize and has been honored by the Arts Foundation of Michigan, ArtServe Michigan, the National Writer’s Voice, and the Academy of American Poets. From 2003-05, she was selected to serve as the first Poet Laureate of Grand Rapids, Michigan. Foster is the founder of the Contemporary Writers Series at Aquinas College.