Donald Trump said he would make America great again if he became president. Now, as his inauguration approaches, each news cycle brings further proof that if he succeeds on his own terms, the moral core of the nation will rot. What can we do besides cry foul or capitulate in cynical silence?

As a spur to meaningful action, I recommend the saving words of Dietrich Bonhoeffer, a Lutheran minister imprisoned in Germany in 1943 and executed by the Nazis in 1945. In his posthumously published Letters and Papers from Prison, Bonhoeffer writes eloquently about taking responsibility:

“As long as goodness is successful, we can afford the luxury of regarding [success] as having no ethical significance; it is when success is achieved by evil means that the problem arises. In the face of such a situation we find that it cannot be adequately dealt with, either by theoretical dogmatic armchair criticism, which means a refusal to face the facts, or by opportunism, which means giving up the struggle and surrendering to success. We will not and must not be either outraged critics or opportunists, but must take our share of responsibility for the moulding of history in every situation and at every moment, whether we are the victors or the vanquished.”

In our national history, we have seen goodness succeed time and again—goodness coupled with fairness. Look at the 1st Amendment. Look at the 13th and the 19th. Look at all the people you know whose lives and prospects were forever brightened by civil rights legislation. Look at that beautiful rainbow flag and think about how proudly it waved on the day same-sex marriage was legalized. Of course, setbacks and outrages and hatred accompanied and followed in the wake of each of these milestones. Still, we know that our leaders in those instances were doing what they could to make things better for those of us alive today.

I don’t see that happening with Donald Trump.

And yes, I’m an outraged critic. But in the coming months, I’m going to try to remember, and act on, Bonhoeffer’s directive. It’s easy to point fingers and write blog posts. It takes enormous energy and brainpower to mobilize and work toward a better outcome than the one we’re facing now.

Bonhoeffer’s further thoughts, on heroism, give us still more to ponder. Extremists and armchair critics alike would do well to wrestle with the following:

“[T]o talk of going down fighting like heroes in the face of certain defeat is not really heroic at all, but merely a refusal to face the future. The ultimate question for a responsible man to ask is not how he is to extricate himself heroically from the affair, but how the coming generation is to live. It is only from this question, with its responsibility toward history, that fruitful solutions can come, even if for the time being they are very humiliating. In short, it is much easier to see a thing through from the point of abstract principle than from that of concrete responsibility. The rising generation will always instinctively discern which of these we make a basis for our actions, for it is their own future that is at stake.”

How will the coming generation live? That’s the question Bonhoeffer asks us to keep foremost in our minds. And how will that generation judge us? How will I be judged? These are matters to address in solitude, over dinner tables, in classrooms and public forums. Let’s think it through, talk it out, put it in print, on the walls, in the airwaves, on the screen and stage.

We owe future generations the effort it takes to discern the difference between success rooted in goodness and fairness, and a corrupt version rooted in calumny and evil. We don’t need martyrs; we need people who can look an image of Dietrich Bonhoeffer in the eye and say, “I hear you,” and mean it. We need to believe we are capable of living in this world and making it better, not worse. And then we need to do it. 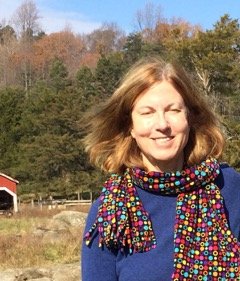 Hilary Holladay is the author of Tipton, a novel set in Oklahoma and Virginia. She lives in Orange County, Va., and blogs at hilaryholladay.com. Listening to Dietrich Bonhoeffer is from her blog.