My favorite flower is an iris, inspired by Van Gogh’s painting, Irises. It’s a painting of blue irises with one white iris symbolizing his loneliness. I feel loneliest in a group so I strongly relate to this painting.

I have been photographing irises longer than anything else. I started taking photos of flowers, especially irises, roses and tulips, in the spring and summer months of the late ’90s and early 2000s in Providence, Rhode Island, where I live.

I have struggled with manic depression for three decades. The mania made me view the world very differently than normally. The vibrancy and technicolor of nature is stunning and beautiful.

I find Irises to be a special flower because they are stunning yet very short lived, so I have a short time to photograph as many as I can. I find that exciting and intoxicating.

After taking my shots, I edit the photos by saturating the colors to make them appear brighter and more intense than they may appear when I view them. I also use shadowing in the backgrounds so the photos almost seem to pop off the page in a 3D quality for a more thrilling image.

My greatest inspirations are Ansel Adams, Georgia O’keefe and Vincent Van Gogh. When I am struggling through my depressive phases, I look to these artists. I can go weeks or months without producing one photograph.

Thankfully, eventually the flowers start sprouting and my inspiration returns.

flowers die, I start to look elsewhere for images—architecture and city views. I also purchase flowers from farmers’ markets and photograph them in different vases inside, and have even laid out a few in the snow.

I was taking a walk in Providence and saw this pink dahlia in the snow. It was solo and it had grown before the snowfall. I was thrilled to see such beauty on a dreary day. It’s as if the dahlia was using the snow as a pillow to rest on that cold day in November.

I think my photography has changed over time as my mood has stabilized. I always look back at the older ones as some of my favorites. During my depressive episodes, I am able to remember these positive experiences and keep hope that I will continue my work when my mood improves. 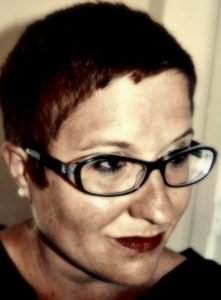 Salvi, a photographer and painter, studied sociology and psychology and took courses in photography and greeting card design at the Rhode Island School of Design (RISD). She has exhibited her work in Providence at PeaceLove Studios, Peaceable Kingdom, the University of Rhode Island Gallery, Flipp Salon and Apothecary’s Gallery Space. Elsewhere, Salvi also has shown in New York, California, Minnesota, Oregon, Germany and Tunisia. She won the People’s Choice Award at Providence’s Chabot Fine Art Gallery in 2010.