It had just snowed a heavy snow, and my mother picked us up early from school. The roads were not that scary or impassable, but she drove with great care that day anyway—this was Richmond, Virginia and no one was accustomed to snow there. We sat bundled in the grey Chevrolet station wagon, all four kids in our colorful, puff polyester coats. I remember liking that name, Chevrolet, saying it over and over to myself. The radio broadcasted the AM station, the one that always shared the school closings or delays, and how much snow there was or would be.

My mother jacked the volume dial up when they played Slip Sliding Away. She delicately turned the icy corner from the busy road to the small road that led to our house, and I could feel the car tires crunching over the frozen rails of plowed snow. The DJs were prone to playing snow-related songs between the patter and forecasts, and for our officially southern town, this song was funny. Anyone behind the wheel on a day like this was at least half terrified. The song made us laugh, and my mother sing. She was in love with Paul Simon, his sad lyrics, his world-weary melody. She sang along, alone in her little bubble in the driver’s seat of the car.

It was the early eighties; my mother had just turned forty. She was just starting a descent into various illnesses and depression, and was already transforming her social drinking into a regimen of self-medication. But I didn’t know that then. I figured out later that the song on the radio wasn’t about snow, and my mother wasn’t singing about snow.

That spring my mother drove carpool and wrecked the car on a clear, warm, sunny day. She missed a stop sign and another car broadsided the wagon. The speed limit was low near the school she was headed for, so there was no damage besides her own embarrassment. Just a few blocks from dropping everybody off, she was so close to not crashing with a carload of other people’s daughters.

A few months later in late summer, I saw things really slip away from my mother. I was preparing to start the eighth grade, and the six of us sat at dinner together, just like every night. We sawed at our fried steaks, silent. I felt a charge in the air between my parents. All unspoken, I could hear it crackle. They sat on opposite ends of the long table, my father with an energy of vigilance, my mother slow and clumsy.

She began to choke. We swiveled our heads in her direction, never having heard or seen anything like it. Her head tipped forward into her plate. My father, in a flash, came behind her, wrapped his arms around her and heaved until the steak dislodged. My mother regained some alertness and cleaned the food off her face. Without a single word spoken, we finished dinner.

After we cleared the table, we dispersed to do whatever we were apt to do after dinner on a summer evening, left on this night to deal with our reactions to the bizarre and tragic dinner scene on our own. It was not discussed. I moved on to last-light neighborhood roaming, then frantic summer reading assigned months before. Several hours later, I re-entered the kitchen close to bedtime and found my mother sitting on the back stairs from the living room, wrecked. Crying. My father was with her, leaning in close, talking intensely. Persuading her. Carol, you have to do this, he said. She said, But I don’t want to do it. I had tried to put dinner out of my mind. But I read the signal then, the two of them like that, talking the way they were. Something was happening.

My mother entered rehab for the first time the next day, two weeks before school started back up. She was gone for a month. In the first week, my father had my older sister and I attend a training at the rehab facility. In my shock, sitting in that solemn room with other patients’ relatives, I was asked when I realized my mother was an alcoholic. I saw the leaden faces of other daughters and sons, wives and husbands, and I felt embarrassed. I didn’t know, I said.

Later, I’d understand that for me to realize such a thing, I would have had to consider it unusual. With just one mother, I had nothing to compare her to. But in that room, after the spotlight left me, I turned to my older sister and whispered: Did you know? She looked at me with exasperation, disbelief. She rolled her eyes. Yes, she said. 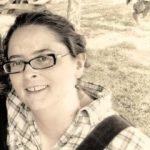 Anne Carle Carson writes creative nonfiction, and is currently working on a memoir of her life with her mother. Her essay Weddings Aren’t Just for Straight People Anymore was published in the anthology Altared: Bridezillas, Bewilderment, Big Love, Breakups and What Women Really Think About Contemporary Weddings (Vintage, ed. Colleen Curran, 2007). Carson also works as a marketing copywriter, and lives with her wife Chris in Richmond, Virginia.

One thought on “Sliding by Anne Carle Carson”