“Old age ain’t no place for sissies,” the actress Bette Davis famously said, and these words reeled through Muffin’s head as she crammed a pill pocket down the throat of her ancient basset hound. Ernestine was no sissy. Overweight, asthmatic, maybe a little depressed, the dog had the droopy-eyed mournfulness of Davis during the late “Baby Jane” phase of her career. Some of her teeth had fallen out. Her swaybacked body was knobbed with benign tumors the vet said were “evidence of her aging immune system.” She smelled musty, cheesy, like a Brooklyn deli on an August afternoon.

To sympathetic friends, Muffin described Ernestine as “on her last legs.” More specifically, she couldn’t walk, couldn’t lift herself to pee. Muffin had to roll her in a blanket, all seventy-two pounds, and drag her out the door, dribbling. No more did she rouse herself for treats—rawhide twists, ice-cream spoons, provolone. Throughout her life—when abandoned as a puppy behind Carl’s Jr.; when Butch, Muffin’s awful boyfriend, moved in briefly; when a neighbor’s mastiff chewed a hole in her—she had maintained the stoic patience of a reference librarian. Old age had simply worn her out.

“One more, just one more little thing,” Muffin crooned as she chased the pill pocket with vitamins, eyedrops, eardrops, wincing at the dog’s involuntary sigh—the last dog Muffin, pushing seventy-five herself, would ever have.

She tried to be realistic about the future, the day she’d stumble on Ernestine cooling in her nest of pillows. She pictured the food and water bowls gone, the dog smell out of the cushions. She even toured her backyard, seeking Ernestine’s final resting place (under an orange tree, she thought). But while the dog lived, panting and needy, it was hard to feature. Like a dream of her own death.

The vet recommended a “pet grief group,” but Muffin wasn’t a joiner. Her friend Adeline invited her to a spa, knowing she couldn’t leave Ernestine and hinting she should put her in a kennel. Muffin’s own GP, Dr. Spears, a hearty thirty-five-year-old, suggested a cruise, but beyond the Ernestine-alone problem, there was the fatty cruise food, the endless bridge games and the well-known drunkenness of cruisers.

Still, she perused online travel sites and read a book about Bhutan. As Ernestine snored at her feet, Muffin snacked on smoked gouda, scanning pages on “ancient yak trails,” “heart-pounding treks” and the “pulse oximeters and portable altitude chambers” carried by guides in case tour members collapsed. Setting the book down, Muffin rose from her chair and felt pressure ripple like an alimentary tidal wave from her breastbone to one shoulder and down an arm. Her teeth locked unpleasantly.

With an odd detachment between her head and limbs, she found her car keys and drove herself to the hospital where she waited in Emergency with a man whose head bandage bore a round red seep like the sun on a Japanese flag. Three TVs jangled and children ran around knocking into chairs. At last, she was ushered to a curtained bed and a nurse took her temperature, checked her pulse, drew blood and attached electrodes from a rolling cart to her chest. When a handsome intern arrived he said jovially, “Well, Muffin…,” as if her name, cute maybe for a toddler, was a joke at her age. He then explained, enunciating with infuriating slowness, that she most likely had angina. The heart muscle doesn’t get the blood and oxygen it needs, producing pain or feelings of pressure. Had she been eating when it happened? Had she moved from a warm to a cold room and perhaps experienced a strong emotion? With her permission, he wanted to admit her to the hospital for a battery of tests.

Throughout the following day, from different rooms that reeked of alcohol and hand sanitizer, she phoned around, frantic over Ernestine. She kept a key under her doormat, kibble in the kitchen, the pee blanket nearby—it wasn’t much to ask, she didn’t think. But Adeline didn’t answer; Butch’s line was disconnected; and her neighbor’s voicemail said she was gone for the next two weeks.

When Dr. Spears arrived she was so beside herself he ordered her some Lorazepam, in addition to the other L-drugs a cardiologist had prescribed—Lasix, Lopressor, Lotrel, Lipitor. “I don’t take pills,” she murmured, as she had to Dr. Chin, before accepting a cupful.

The next day she got through to the veterinary clinic and a new tech offered to fetch Ernestine and keep her till Muffin’s release. A week later, with a folder full of discharge papers, she drove straight there, in the clothes she’d worn to the hospital. She moved stiffly through the morning air, conscious of her beating heart, her anemia, her high blood pressure and cholesterol. Inside, the burly tech appeared with Ernestine, and after Muffin paid, carried her to the car. There, with the door unlocked, stricken by her dog’s wheeze, Muffin held her arms out. The tech hesitated. At the very moment he said, “Really? Can you?”, she said, “I can’t, I don’t think…,” and sobbed.

Back in the clinic, Ernestine was arranged on a table as the vet brought supplies and explained the drill. Three injections, given gradually, would relax her, make her sleep and stop her heart. Muffin fumbled for her Lorazepam. She stroked her dog’s ears, her droopy eyelids, which twitched but stayed closed. “You’ve been the best girl,” she mumbled guiltily, as Ernestine went limp. Finally, she seemed to say.

More than anything, Muffin knew that she would feel in her hands forever the shape of Ernestine’s head, the soft ears, the hard, heroic brow. And the way she slipped off with her dignity intact. 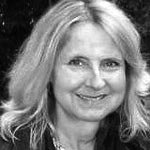 One thought on “Ernestine Goes to Heaven by Susan Heeger”