In the summer of 1960, my father got high and I held the ladder. “All you have to do,” he told me, “is to hold it steady and turn the radio dial when I tell you. Whatever you do…” he said, sternly, “don’t move the ladder. That means no talking to friends, no kicking pebbles, and no daydreaming. Got it?” With that, he scooted up the side of our house to the second story, fresh paint from his bucket splattering and sticking to Silver, his aluminum ladder.

He ascended rungs like a seasoned fire-fighter but, that, he was not; he was a musician and the only sizzle he appreciated was a smoking saxophone. The higher he climbed, the brighter his mood. He was as serene as the breeze pumping his baggy pant legs into parachutes. With a little jazz wafting from the plastic, black and yellow radio, he was back in the saddle again.

Meanwhile, I was holding the horse in the graveled driveway. For hours, I’d stand there, checking my watch, my sunburned fists frozen to a white-hot crossbar. Two things saved me: afternoon ballgames and the older girl next door.

A guy named Gowdy, the Boston Red Sox radio voice on WHDH, thankfully broke the too-much-with-the-tenor-sax hypnosis, his warm twang waking and welcoming me to Fenway. “It’s Red Sox baseball,” he’d say. “Brought to you by the brewers of Narragansett Beer. Hi neighbor, have a ‘Gansett.”

I imagined myself digging in at the plate taking practice swings. Sizing up the southpaw on the mound, I wondered how hard I could drill one into the towering wall, the mighty Green Monster. Daydreaming, though, sometimes meant kicking Silver. “What the hell are you doing down there?” my father snapped, his dripping paintbrush blotching the rungs butterscotch. “For cripes’ sake, don’t move the ladder! Pay attention!”

It was easier to pay attention to Dee, one house away. A seventh grader and three years older than me, she was a blond goddess who walked around on her patio with a bikini and a sparkling tiara. When she smiled at me, a butterfly cloud mushroomed inside, wings brushing my soul.

I remember how she’d turn up the volume on her transistor radio whenever WMEX Radio played that funny song, Itsy Bitsy Teenie Weenie Yellow Polkadot Bikini. The song drove my father crazy, enough so that he would lose his train of thought, spill paint, and mutter, “For cripes’ sake, what the hell is that racket?” Sometimes, he’d dismount Silver altogether, which meant descending the great beast. When grounded, he’d stare at me as if I were the culprit, then cast a suspicious glance toward the McDuffys’ enclosed porch where I knew Dee had taken cover.

Invariably, friends would come by. The day Mickey showed up, my father was mixing a new can of paint in the garage. “Dee smiled at me today,” I said.

“I have to hold the ladder,” I said, lamely.

“Don’t sweat it. I’ll hold the ladder once your old man starts painting. He won’t even know you’re gone.”

When my father returned to his perch, Mickey appeared from behind a tree and took the reins of Silver. I carefully stepped over the hedges that separated our driveway from the McDuffys’. When I looked up, there was Dee dancing under the sprinkler and smiling at me. I couldn’t believe it. She turned off the water, shook herself dry, and motioned for me to come over.

I looked back at Mickey to make sure he was seeing what I was seeing. When I saw him hopping and hysterically waving at her with both hands, I disappointedly realized Dee was signaling him. Then, I realized something much worse: his hands were nowhere near the ladder.

The sudden wind that swept out of the south that day was a total surprise, especially to Silver which slipped a half-inch behind the high-stepping, wind-milling Mickey.

In slow motion, I saw Mickey hurdling the hedges into the McDuffys’ yard, the look of horror in my father’s eyes, and a rattled crossbar awaiting my grip.

In the summer of 1960, there was Silver, a kid with dreams, and the girl next door with a shiny crown. She made the world spin and the paint splash.

She made the ladder move, 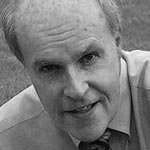 Rich H. Kenney, Jr. is a former ladder-holder who grew up in East Braintree, Massachusetts. He teaches social work courses as an associate professor at Chadron State College in Nebraska. His essays and poetry have appeared in Streetlight Magazine, Social Work Today, and Cloudbank.