Streetlight art editor, Elizabeth Meade Howard, had her book Aging Famously: Follow Those You Admire to Living Long and Well published by Jefferson Park Press on September 10thth. Jane Barnes, author of Falling in Love with Joseph Smith, talks to Howard about her recent publication.

Barnes: Why did you write Aging Famously?

Howard: It was initially a mourning project, sparked by my father’s death. He lived to 90 and had long been my mentor and role model. He had a young spirit to the end. I felt suddenly elevated to family elder and wanted guidance from other older men and women I admired.

Barnes: Who was your most surprising interviewee?

Howard: Walter Cronkite. He was smaller and more vulnerable than I expected, very genial, relaxed and deaf.

Howard: Carol Channing. Her sandpaper and sugar voice as advertised but an off-the-cuff candor and humor I hadn’t expected.

Howard: Reincarnation researcher Dr. Ian Stevenson. He was a very formal, old school gentleman who spent most of his academic career pursuing a controversial, far-out field.

Howard: Photographer Gordon Parks. I admired his work and had tried to interview him several times. He was cosy and quiet, fun and flirtatious.

Howard: Perhaps poet Stanley Kunitz who at 99 still welcomed me into his home and gave me his time and attention. I wept in the elevator after leaving knowing I’d been in a remarkable presence and would not see him again.

Barnes: How did you get to these famous people?

Howard: By being obnoxious…following every lead, however pushy…whether asking filmmaker Jean Bach to call her friend Bobby Short, or wangling backstage to corner Nanette Fabray or Hal Holbrook.

Howard: People who slowed down but never broke stride. They continued their passions or explored new ones, even as their health declined. They had purpose and they were willing to risk competition and failure to pursue their interests.

Although to me, some seem to be taking inordinate risks, they likely did not feel it risky to them…They kept their focus and drive against loss and loneliness. They were used to being famous. They’d always been in the limelight and couldn’t imagine failing. Even if they did fail, they kept on. They took risks in retirement because they still expected them to pay off.

Barnes: Whose advice was the best?

Howard: Stanley Kunitz said “poetry is as good a medication as many for keeping one’s senses alive. And not only the mind, the senses, affections. It’s very important to feel one’s self a part of the world you live in, and to care about others as well as your own being.” 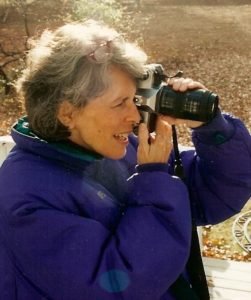 Elizabeth Howard will read from her book at Charlottesville’s New Dominion Bookshop on September 15 and the Senior Center on September 22nd.