An essay on creative process by Rachel E. Diken

The Open Road had long been a solace to me, until a highway crash many years ago where faulty brakes caused a high-speed tumbling wreck. I was moving from the Northeast to New Orleans, so the vehicle was packed with everything I owned: primarily, a dozen backpacks full of the poems, essays, and notebooks documenting my travels. As I was loaded into the ambulance, I saw my pages of writing floating through the air, carried away by the wind over the highway. The experience marked a wounded place, the genesis for the belief that “my writing is a casualty of my life on the road.” For the six years that followed, I gave up writing and all creative pursuits.

Identifying primarily as a poet, I had no former ambition to write a play before this odyssey began. I was first let in on the fact that I was developing a play when, after writing what I thought was a poem, I looked down at the page and realized I was looking at dialogue. Cue the ensuing moment of “Oh shit, I’m writing a play.” At that moment of realization, I also had the feeling that this thing was going to come out fast—too rapidly to allow for enrollment in a formal playwriting program—and that I’d better find a way to educate myself quickly if I wanted to do it justice.

The signs had started earlier, though, before I recognized them as signs. Seemingly random oddities that didn’t have a framework to make sense in yet. Maybe six months prior to the dialogue realization, the universe left me a calling card on the door handle of my apartment: a yellow plastic bag containing a textbook for “understanding plays.” The culprit was a neighbor whose knowledge of my being a writer led him to conclude that I would like this book. He had a habit of listening to the police scanner late at night (among other peculiar pastimes), so I kept the gift out of politeness and didn’t pay it any mind.

Once I accepted the idea that this play was happening, the education took a life of its own. Stumbling on a library book sale, I discovered that I could acquire an entire theatre shelf for eight dollars. My goal was to touch on the major notes of the canon and glean a basic understanding of what came before. Some loyalties proved non-negotiable; admittedly, my most thorough research was of a prior affair, in this case reading all the way through The Complete Dramatic Works of Samuel Beckett.

Starting a theatre column seemed like a good way to keep myself accountable to attending productions regularly (in a cost-effective manner) and thinking critically about the artform. Within a month’s time of said inspiration, I met an editor-in-chief while on a literary outing. Hearing my ambitions, he offered his journal as a space for me to develop my column. I averaged a review per month and began to expand my network in the industry. The column quickly produced unexpected rewards: primarily, the opportunity to be of service to the community I was entering. Receiving a glowing letter from the National Critics Institute after applying on a whim to their annual conference was a thrill as well—and an indication, I hoped, that I was heading in the right direction.

At another chance encounter, an actress referred me to a theatre group in NYC that is known for its high-profile lineage. Following the suggestion, I began to attend. It’s an intense crowd, but more welcoming than anticipated, and I dove in. The group has been a source of motivation and reinvigoration, even as it runs late into the night after long hours of commuting and working a day job. Witnessing and interacting with other artists making sacrifices in the same grind helps to get over the daunt of delayed or potentially not-at-all payoff, and to simply keep on with it.

After about a year of going around like this and scribbling random scraps of dialogue, plot, and theory into a notebook, it was winter, and I had a vision that I needed to go into the mountains at the end of summer where the play would reveal itself to me. Don’t ask me where it came from! I applied to a few residencies, despite the short notice, and started to mention my inspired plan to practically everyone I knew. The Porches, a writing retreat in Virginia, was recommended by a friend. All requisites were met: it was in the mountains, drivable in a day’s journey, every room with a porch and a fireplace, and, of course, affordable. I was accepted and booked for August.

Although I surrendered to the whole process, I wasn’t entirely enthusiastic about it, especially the summer journey. It would be the longest stretch of highway into unfamiliar territory faced alone since the crash where my writing was lost. Another consideration was the sheer dedication of time and resources required to write this play. And despite enjoying a mountain view, my habitats of choice are urban cities and beach communities, certainly not the woods. One week prior to my arrival, Neo-Nazis rallied in the nearby town where I planned to buy groceries, and a solar eclipse would occur during my stay. I didn’t anticipate that my movement toward drama would manifest so literally. In other words, the fear-facing involved was more extreme than I would have preferred, or thought myself willing to show up for.

When the time came, I packed my car, without any particular clarity on what would happen once I arrived. Feeling blindfolded and investing my trust in the process itself, I headed into the mountains. Once there, my “digital detox” began: no phone service (unavoidable), and no TV or social media, with only one hour per day of internet connection (self-imposed).

I slept a luxurious eleven hours on the second night, and barely three or four hours on each subsequent night—the handiwork of nightmares and fever-dreams. That part, strangely, was easy to accept, under the following logic: if there was a time and a place for dark currents of consciousness to sort themselves out, this had to be it. Fear then emerged with character-development, which was a first-time endeavor for me. I was afraid that if I wrote them and they got hurt, or hurt others, that it would be my fault for bringing them into being. Handling these fears in a similar fashion to the others, I enforced a zero-tolerance policy. Any participation in fearful narratives could mean ruin. The only choice was forward movement, albeit blindly.

As inexplicably promised, the play revealed itself to me in that week. In the process of the play’s construction, my psyche was deconstructed. (As unpleasant as it sounds!) The image that comes to mind is that of a ceramic animal—as though someone took a hammer and with one small tap, fragmented the thing to pieces. I wandered about in the shards for days. However, as the play took shape, so it seemed that my psyche reassembled, with some maladaptive pieces left out of the new structure. A healing.

It is remarkable enough that this play and its immersive process came only a few short years into my re-embracing of creative life. One of the many synchronicities of being guided to this place at this time was that the Virginia interstate was the point in my past exodus to New Orleans where the fateful crash occurred, also at the end of August. On the drive back from my playwriting trip, exactly ten years later, with a draft of my play in tow, I felt both relieved and stunned in the wake of what had just transpired. For about two of the eight hours’ drive, too exhausted for exuberance, I settled into the highway, grinning, grinning.

To recount each challenge and personal fear involved with the writing of this play would be over-indulgent. Suffice it to say that the process functioned as an apparatus through which several old lives and identities were cleansed and shed. It revealed me to be braver than I would have considered myself. At the same time, it seems miscalculated to attribute any of it to “me.” None of these events were my idea—including the writing of this essay. I simply followed instructions. And I only did so because, somehow, I felt that my life could not move forward until, at each inspiration, I said, “yes.” 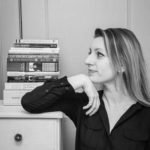 Rachel E. Diken is a poet and playwright whose work appears in Cultural Weekly, december, HowlRound, and a production of The American Poetry Theater, among others. Her many creative projects include writing a theatre column at The Atticus Review and a daily haiku via Twitter @haikuavenue. Visit rachelediken.com.

3 thoughts on “When Called, Say Yes”