“The houses that were lost forever continue to live on in us…they insist in us in order to live again, as though they expected us to give them a supplement of living.”*

I liked to throw a baseball against the house, aiming as close to the side door as I dared and catching the ball as it ricocheted back to me. It was how I honed my pitching and fielding. Mom said, “You’d better not hit the door.” My little sister liked the regular pop of hardball striking yellow brick, but soon after her fifth birthday, she had a nightmare about the side door. Scenario of a broken lock untended, a door neither open nor shut tight, danger on both sides, a chronic ajar-ness, the nightmare would return frequently for more than four decades.

We had secret names for one another. She was Deanie and I was Bud. Deanie told me about her nightmare which, over the years, would deviate little from its simple, original appearance. She said that in the dream, she remained a child. It was night, the family was indoors, but only Deanie saw that the house was not secure. Our parents failed to notice or repair the broken lock. This made no sense to her. She couldn’t tell them because fear had clamped her throat and robbed her of speech. She stood at several feet from the door, watching it, but unable to move her limbs until fear pierced the mantle of sleep itself. Each time, she woke at the same paralytic point, the problem of the dream unresolved. Deanie’s nights foretold, over and over again, the damage of her future days.

“We consider the past, and a sort of remorse at not having lived profoundly enough in the old house fills our hearts…”

I’m a man now and I can’t help but feel grateful to Deanie. She was fighting for our corner of time and place, our unprepossessing box house on the edge of Detroit. I recall her kindergarten enrollment for which Dad had to drag her across the door sill. I can still see my sister in her little girl party dress for first day, one spindly leg fighting to remain inside the house, the other leg on the porch. She turned sideways and pressed herself tightly against the door frame, her right arm outstretched along the wall inside the door, left arm along the exterior wall. When Dad removed her, finger by finger, from the brick facade, I saw that her left hand had razor-fine scratches, each one a sliver oozing bright red. It took weeks and a few sessions with the kindly school psychologist before Deanie stopped hugging the house and battling each morning.

Outwardly, my little sister had been subdued. In the rhythmic months and years that followed, she walked to and from school with our little group from the block. She preferred home, watched for snow days, and faked sickness now and again, yet in those tiny resistances she was no different from the rest of us. But at the age of fifteen, Deanie suffered a more serious setback when she lost the house forever. We moved to a newly built split-level miles from the city’s postage-stamp yards, downtown skyscrapers and baseball stadium, crossing several town lines out to where the lots and houses were spacious. It was low density, you might say; you could hardly see your neighbors through the leafy expanses.

Nobody asked us if we wanted to move. It didn’t bother me all that much as I had finished high school and was on my way to college. But Deanie, although she loved our parents perhaps too fiercely, never quite forgave them. She set herself against the new place. She waited for the time of exile to pass. Mostly, she stayed in her pristine room. Mom, promising sleepovers, furnished it with twin beds. But Deanie said her old friends were too far and she had no new friends to invite. She slept in one bed and through the glow of a plug-in nightlight, stared bitterly at the other. She read. Taught herself guitar chords. She stood at the window and cursed God and the abundance of trees.

There was no going back. My sister changed schools, achieved high grades, graduated, went away to college, married a lawyer, and had two children. Eventually, Deanie would live in numerous places of her own choosing, yet she still dreamed that dream, a nightmare about the other house, our side door and a broken lock. Once, I suggested to her that with the progress of adulthood, the power of the dream would diminish, but this upset Deanie. She said she didn’t see things that way. She said life was not progress, but a series of traded locations, faces and voices. New house for old house. Husband for mother and father. Children for our own lost childhood. Deanie tried to look forward, but mostly she’d rather talk about how I used to throw a baseball against the old house.

Our mother was eighty-six when she died. Stubbornly nursing his wife at home to the end, Dad was exhausted. After they wheeled her body away, he went to bed alone for the first night in fifty years. Deanie and I sat up late, she at one end of the living room sofa, while I took the other. With Mom gone, we propped our stockinged feet on the coffee table. “He has just completed his final act of marriage,” Deanie said. “That’s love. I’ll never know anything like it.” Then she gazed at the room. “I don’t like this house,” she said. As if to record the fact again. As if to say certain facts don’t budge, not even for grief. I asked if she still had the side door dream. “Regular as rain,” she said.

Dad remained in the house that Deanie never liked. He enjoyed domestic routine. Sitting at his desk, reading Time and Newsweek, paying bills, tending the yard, cleaning the garage. He enjoyed making sandwiches and eating them from paper plates while watching sports on television. Whenever we visited, he produced a wad of dollars and sent us to the supermarket for more rye bread and sandwich meats. Then one spring morning, he walked out to check his rose bushes, suffered a heart attack and died. The mailman found him. It troubled us both that we weren’t with Dad when it happened, but it troubled Deanie more. She couldn’t maneuver that fact into any kind of merciful place. She unnerved the mailman by ambushing him several days in a row, repeatedly insisting that he paint the scene, its chronology, demanding to know last words though there were none. She remained agitated until the house was sold and we didn’t have to go there anymore.

“Why not sense that, incarnated in the door, there is a little threshold god?”

Not long afterward, her own kids grown, Deanie left her husband and rented a small apartment in Detroit, near the new ballpark. I visited her recently. And here’s the funny thing. She told me that after moving back to town on her own, she stopped having the side door dream. “Well, what do you think it means?” I asked. She looked away from me, towards the window and the buildings outside. I waited, wishing I had not spoken, not caused painful remembrance, but my question was in the space between us and I had to leave it there. “I don’t know,” Deanie said, finally. “Maybe it means don’t get married…don’t have fathers.” Then with a little laugh, “And for sure, don’t get hooked on houses.” Another pause. “Anyway, it doesn’t matter now.”

I let the notes of her familiar voice settle in the unknown room. I saw my sister’s face, no longer young, yet with all her ages inscribed on it. I wanted to put my arms around her. We walked to the ballpark and watched the game. 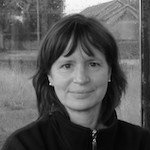 Amy Kenyon is a historian and writer-photographer. She is the author of Dreaming Suburbia, a study of Detroit and postwar sub-urbanization (Wayne State University Press) and a first novel, Ford Road (University of Michigan Press). As a writer of fiction and nonfiction, she has published with Belt Magazine, Salon, Great Lakes Review, Bright Lights Film Journal, Eclectica Magazine, Cobalt Review, and The Detroit News. She is also a regular blogger for Huffington Post UK. Born and raised in Michigan, Amy now lives in London. Website: amykenyon.net Twitter: @Amymkaye.

*The quoted material in this story is from The Poetics of Space by Gaston Bachelard.