Last week was a mess! Well, at least that’s what I’ve been told. In my purpose-coaching practice, I had four clients in a row who used the word “mess” to describe their life these days. One client said, “because I’m at a job that requires me to be professional all the time, I have to constantly appear as if things are together but underneath it all, I am a fucking mess.” Another client spoke about how his artistic perfectionism doesn’t allow for anything to get messy and yet he went on to describe his myriad of unexplored projects and undeveloped ideas to be “a big stinking mess.” This all got me thinking a lot about if mess has a purpose in our life.

I am the creator of the art ‘morningaltars’. My art is earth art and I encounter a mess every time I create. The perimeter of my earth canvas is littered with the remains of past altars which are the physical memory of all my previous work. Most recently, I had a friend come over and walk down the path to the creek where I build the morningaltars and she told me that before she noticed the newly perfected altar that I had just labored over for six hours, she first noticed the mess surrounding it. She was struck by the circumference of colorful compost of altars past and while I usually just ignore it, the mess captivated her. She even called it beautiful. Thus, I continued my wondering: Does this ignored and disheveled mess actually have some important and necessary belonging to it?

Most people I know hate mess. We have a cultural intolerance toward most things messy and have been programmed from childhood to see mess as a problem to solve, or a situation to avoid. “Clean up your mess” is possibly the most common daily request that a parent can make of a teenager. Colloquialisms such as “shape up or ship out” or “get your act together” underscore a collective commentary that says: Your mess is wrong so fix it. In many ways, mess means failure and is often reacted to by feelings of embarrassment or shame. And so much of our daily efforts becomes preemptive – how to control our lives, our day, our relationships in order to prevent the mess from happening. Yet, no matter what we do to control it, it seems that the mess eventually returns in one way or another, with that caravan of unsettled feelings that accompany it. Yet, if the mess persists then perhaps it persists for a reason other than the possibility that you keep doing something wrong. And maybe it’s asking for us to discover another way of relating to it other than just trying to get rid of it altogether. But how?

I’ve been taught to look at the root of words, for they sometimes reveal something aberrant and insightful. The etymology of the word “mess” did not disappoint. “Mess” comes from the Late Latin word “missus,” meaning food, literally that which you place or put upon your table – like a mess hall in the army. The very thing that most people try and avoid, fix, tidy, organize or eliminate is actually derived from a word whose root refers to food, the very sustenance for life to continue. And this is also true for other messy synonyms such as “shambles,” which etymologically refers to a meat or fish market. So how did these words’ original meaning so drastically alter over the past 500 years from being food-related to something which is so entirely unwanted and embarrassing? How did our mess turn into such a mess?

Our disconnected relationship with mess has something to do with our culture’s obsessive relationship with order and control. Since the invention of agriculture 11,500 year ago, humans have been successfully manipulating the natural world to produce more efficiently and with tighter control. This desire to control the means which support life is amplified in its expression in the industrial revolution, colonialism, resource extraction, the prison industrial complex and the list goes on. This collective worship of control for the sake of progress is pervasive on global, political levels and even inside of our own homes. We employ technology to control our temperature so we don’t ever have to be too hot or too cold. GPS controls our sense of direction so we don’t really ever have to get lost, and our plumbing controls our sewage so we don’t have to encounter our own waste for too long. Even within the realm of social media, we posture with a well curated display of the happy-put-together life in order to author a personal narrative of progress. We have become so used to everything being controlled that we have diminished our capacity to encounter any kind of mess or uncertainty.

Years ago, when I first started building morningaltars art outside, it was nearly impossible to witness these perfectly symmetrical altars that I would work on all day get annihilated in a split second with a single gust of wind. I had nothing but resistance and frustration toward welcoming anything that wasn’t expected or under my control. Yet each time my work got destroyed, I learned something significant about the limitations of my control and how important that limitation was to reveal my own humanity. Creating this work in the presence of a pile of my past work reminds me that the mess is inevitable. It’s where my material came from and where it returns to. But the inevitability of the mess doesn’t mean I failed at anything. Rather, it is evidence of my heartbreaking willingness to create something so finely tuned, something that I am so in love with and wish could last forever and practice letting it go. When I let go of my grasp on it being perfect, I can offer it back to the land as the most beautiful artistic feast I am capable of creating.

Our ruptured relationship with mess is corollary to our own resistance to let go and see ourselves, our work, our life connected to a much bigger story. Letting go is the giant exhale that reminds us that we can’t hold onto everything forever and that everything we possess, including our own bodies, are a part of life’s cyclical give and take. Letting go allows the mess to be included back into the whole story again as a source of where we come from and where we’re going to. This is what excites me most about my art. Nature lets go, I take, I let go, nature takes and the process continues. I call this: Life feeding beauty and beauty feeding life.

Collectively and culturally things look very different. Instead, what we can testify to today is a rapacious hunger that resists letting go and is always “on the take” as my teacher, Stephen Jenkinson of the Orphan Wisdom School, says. We take food, air, water, knowledge, land, and rarely give pause to acknowledge how much we consume, where it may have come from and where it will go afterwards. Jenkinson suggests that when we consume without pause, and eat unawares, we become just like a machine, a “need gratification machine” and the food that feeds us is the fuel that only feeds ourselves to keep us going forward. He says, “when food becomes fuel—when anything becomes fuel—we lose sight of whatever once tethered it to the ground that gave it life” and consequently, we’re cut off from life’s give and take cycle.

I recently went out for dinner with my grandmother and as her food came to the table, I asked her, “What animal did you get in your pad Thai?” She responded defensively, “Please don’t say that – you’re making me lose my appetite.” My grandma had forgotten the bigger and messier story she and her food are tied to. Instead, culturally speaking, we forget in order to avoid the mess: we use different names for the meat than for the animals, we have other people slaughter and ship it and we purchase it packaged in neat plastic containers all so we can avoid the messy parts and keep moving forward efficiently, like a machine. Yet, to truly know what has died on your dinner plate so that you can live is not a neat and benign inquiry, but a rather uncomfortable and messy one. It means that you are a part of the grief-soaked give and take of staying alive. It means that you are indebted to all that is dying to feed you. It means letting the mess interrupt your meal, when all you want to do is eat your dinner.

So in a way, when my clients refer to their day or mood as a “big stinking mess” and find it almost impossible to carry on with life as planned, than perhaps this is actually the unwelcome purpose of the mess: to rupture the normal, neat and organized and somehow remind you that life is so much bigger and messier than what you thought it was or planned it to be. The mess is requiring us all to respond to it by slowing down, letting go and mustering the courage to allow the mess to have a place in our lives, not because we did something wrong but because we’re being fed a greater remembering: That everything we have is because of what came before us and everything we’re doing is to benefit that which will come long after us. The mess interrupts the incessant, unconscious and self-directed taking, controlling, consuming and, if we can somehow permit it, it offers us the uncomfortable yet necessary reminder that our life must feed that which feeds us. And when we can remember that, then the mess ceases to be the unwanted thing to fix and becomes the life-giving food once again. 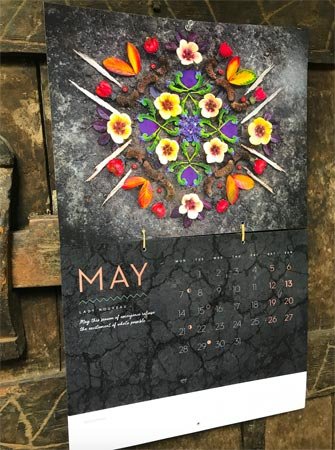 Day Schildkret is internationally known for Morning Altars and has inspired tens of thousands of people of all ages from all over the world to forage, build and be awed with Earth Art.
Morning Altars is igniting an international movement of art, workshops and a spiritual practice that renews and redeems our relationship to nature, creativity and impermanence. With over 53,000 followers on Instagram, over 25,000 on Facebook and workshops and installations worldwide, Morning Altars is bringing ephemeral art to the collective human imagination. The first Morning Altars book is being published Fall 2018 by The Countryman Press. You can follow Day on Facebook.com/morningaltars and see his gorgeous morningaltars on Instagram.com/morningaltars.