My selected photographs belong to two different periods and locations but stem from similar motivations. They are studies, each leading to the next image, knowing that images birth one another. They are all connected as, in reality, they are the inner life of the creator.

As for the effect, I place the objects, or find the objects as they are. I try a number of angles, and lighting conditions so I am not necessarily sure of what the final product will be. I shoot hundreds of images of the same subjects as I move around them. I will leave the arrangement as is, and go back to it at different times of day. I may very well create a thousand images of the exact same still. Angle, cropping, speed, light, f-stop—everything I can control, I change as often as possible.

I used a number of cameras and lenses to create the resulting effect: tilt-lenses with light diffusers, and I stretch the effect of contrast until I get a more drama.

As a photographer I am, in fact, much more influenced by writers, painters, and other artists than I am by photographers. Literary critic Ronald Barthes for his study of photography, Poet Charles Baudelaire for his discovery of photography in the mid 1840’s, Sculptor Auguste Rodin for the hard pain his creations provoke, Salvador Dali and Man Ray for their exploration of the surreal and unknown. But it’s mostly self-exploration which leads my photographs, and that I find in literature and painting.

Barthes, author of Camera Lucida, said photography allowed him to reconnect with others who had passed on. A photograph should project what he calls a “punctum,” or umbilical cord with the viewer; thus creating a symbiotic relationship, one within which complicity becomes the source of life for the image, and extension of life for the viewer.

Vanishing and Tchoo-Tchoo and Red Symphony are photographs of trains and of the connecting relationship their colors establish with light. These images represent parts to be reconstituted as a dream of what these powerful machines can be. Within these frames, the metal monsters become no more than a toy under the power of light. These locomotives were photographed in Jackson, Tennessee in the summer of 2017. Overcast days often offered me the best lighting. I enjoy photographing older trains. Their power attracts me; after all they are the symbol of the conquest of the American Continent.

My other selected photos are the result of experiments with familiar and found objects—forgotten cans of paint, garden flowers and old books. The goal of each photograph is very similar: to give life. Light gives life, and light is essential to photography. The true object of each photograph is to bring to life objects which one once used and beautiful and are now dead or deserted, but have not lost their appeal, their luster, their existence. Be it an old locomotive, a rusty lock, a broken window, half faded books, my aim is to create compositions which will inspire warmth through color, reflection, and animate the objects through what may sometimes seem an unlikely marriage.

All these objects were photographed in natural light between my barn and garden. The paint brushes, pitch-ax, kettle, mason jars, as well as broken window panes—create the illusion of an old home where much has been abandoned. Photography, any art in fact, is a creative action, thus always an illusion. This illusion allows the viewer to feel comfortable participating for this is the invitation he is delivered. He can then make it real for himself. It is essential to only shape the work within limits, to make sure that it is vulnerable to the viewer so it becomes his. Referring to Barthes, we must believe that the artist has died and revealed his heart to us, for us to own and to nurture.

Old objects tell a story. Unused they speak of a past when the hands of the departed (perhaps) gave them life. Often they bring with them the decay of traditions, the abandon of cultures, the end of eras. I discover this through trains, doors, windows, dust and the effect light has on these details. The color of fruit, or the fruit itself, still grows in the garden, while the other objects have been at rest in the barn for so long. It is in fact, photo-graphy which gives life to the found objects.

As Barthes suggested, I feel an artist should explore new relationships; he must offer the potential viewer, his accomplice of sorts, what he has no time to investigate.

As a teacher, I believe that art can only be taught to an extent. I like to see my students discover the possibilities that a camera can offer. I will guide them through composition, color and angles, but I will not tell students what or when to photograph. I want them to discover what works for them. It is their passion, I am only there to ensure that it grows within their desires. Mistakes are great, and often result in miracles. 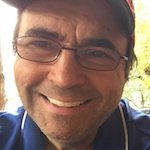 Fabrice Poussin teaches French and English at Shorter University in Rome, Georgia. Author of novels and poetry, Poussin’s writing has appeared in Kestrel, Symposium, Eskimo Pie, The Chimes and more than 90 publications. His photography has been widely published from The Front Porch Review and Foliate Oak Magazine, to San Pedro River Magazine.
Poussin’s most recent show—an exploration of the American western wilderness—included 85 photographs in both color and black and white. The show was held at the Arnold gallery in Rome, GA.