On the face of it, it wouldn’t seem to be a match. Beat writers and military cadets. But Gordon Ball, Allen Ginsburg’s farm manager, taught Beat Generation writers to cadets at Virginia Military Institute for 26 years. Also, on the face of it, a young woman from Appalachian with writerly ambitions would have little chance to meet a man connected to the most famous poet in America. But I did. I met Gordon when I was in my early 20’s, during the 1970’s, because his sister married my cousin. I hadn’t known much about Ginsburg then, but I’d read On the Road and wanted to hit the road, like Dean and Sal in Little Harlem: “Out we jumped into the warm, mad night, hearing a wild tenorman bawling horn across the way, going ’EE-YAH EE-YAH! EE-YAH!’ And hands clapping to the beat and folks yelling, ‘Go, go, go!'” Gordon then had the hippie-length hair and blue-jeaned outfit I admired, so I figured I could dance to whatever song he played. I corresponded with Gordon for 43 years. That’s why, at Ball’s retirement address three years ago, I was in attendance.

I would go on to teach Beat writers for some half-dozen years myself, though I hadn’t planned on teaching anything because I wanted to be a newspaper reporter. And I became one, got hired within two weeks of graduating. I hadn’t worked on my college newspaper though I did join the staff of a literary magazine. I was supposed to graduate in 1972 but didn’t graduate for a year since I’d switched my major from music to English. When I play music, I can’t play a note that’s not on the page. When I write, I need a blank page so I can fill it myself. When I changed my major, Beethoven had started to pound into my brain; Chopin chopped at my soul, and my feet longed to boogie to the beat of lyrics like, “Sugar pie, honey bunch” in the Four Tops tune, I Can’t Help Myself. I couldn’t keep myself sitting still on a piano stool when I wanted to dance, dance, dance to the beat inside my head.

That year, 1972, the college hired a reporter from The Washington Post to teach a class in news writing, and I signed up for it. I must have shown some promise because this teacher kept me after class one day and asked why I joined a literary magazine but not the campus newspaper. I could have told her I wanted to write poetry and short stories, but I don’t think I confessed to those ambitions. Somehow, she worked it out for me to receive a work-study scholarship if I worked on that student newspaper. I used my published clips from there to land that first journalism job. Before that happened, she took me to a long table loaded with student newspapers and asked me to choose the best one. I chose UVA’s Cavalier Daily, noticing that campus paper even had cartoons. Sometimes when I tell this story, I include the cartoonist’s name—Heblich—and go on to reveal that I later married that cartoonist. But I’m not sure it really happened in that way. I do remember the cartoons, probably embellished the rest—that I noticed that name. I didn’t know then that the UVA newspaper paid its reporters, but I knew when I applied to colleges in 1968 UVA didn’t admit women. My first journalist job was at The Daily Progress in Charlottesville, home to UVA. I dated a younger UVA student and confessed to his friends that though I worked as a reporter, I really wanted to write fiction. One of those friends said if I wanted to study fiction I should have attended UVA, home to the master short story writer Peter Taylor, who taught writing there. I felt my jaw drop. He didn’t realize I could not have even applied to UVA.

After working as a journalist for ten years, moving up the ranks by going to larger and larger circulation newspapers, I finally found the place and the space for fiction: at UVA. Though Peter had just retired, we became friends and his wife read my first published short story out loud to him. Peter’s protégé, John Casey, became my writing teacher, along with George Garrett, at the M.F.A. creative writing program, where I won the short story prize. I would teach there and, in 2010, at Hollins University, where Gordon was invited to speak about Beat writers. By then, I’d reported facts for ten years and created fiction for twenty-eight.

I told my Hollins colleagues how we’d met, remembering that, at times when I tell that story, I have Allen Ginsburg himself hitchhiking through Appalachia with Gordon, meeting my mother, who says, “Oh, Mr. Ginsburg, my daughter is a poet too.” I then describe my mortification. But what really happened is that Mother asked Gordon what he did and when he said he worked for a poet, Mother said, “My daughter is a poet too.” Fiction writers have special liars permits—on paper. What comes out of the mouth should be the truth. But after 28 years of lying, I sometimes can’t stop myself from improvising, like a jazz musician, when I should be keeping to the beat. 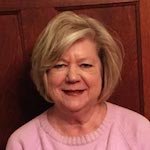 Mariflo Stephens, whose fiction is included in Contemporary American Women Writers, also writes essays, two of which were published in The Barbie Chronicles and Successful Writing Strategies. She was awarded two grants for fiction from the Virginia Commission for the Arts. Stephens’s essay Appalachian Sprung won the Missouri Review’s Miller Audio Prize for 2017, and another essay will be published in Dogwood: A Journal of Poetry and Prose in the spring of 2018.